After going over who may be a good Sorceress, I'm going back to Snake Mountain today to talk about another of Skeletor's henchmen: Trap Jaw.

Trap Jaw was an interesting character. He's not as simple-minded as Beast Man, but he's also not exactly a rocket scientist either. He's kind of a middle-of-the-road villain in terms of his capacity to get things done.

He's got some cool powers though, which makes me hope that he's got a role in the upcoming He-Man movie. Biting through metal and able to change out his right arm into whatever kind of weapon he'd like makes him a fun character and possibly formidable weapon in the upcoming movie.

Unlike some of the other characters I've blogged about already, Trap Jaw is pretty much depicted the same in all of the comics, books, action figures or TV shows that he's been featured in.  In the 2002 series, the size of his arm was a little more exaggerated.  He looked a little bit too much like Frankenstein though.  That's why I prefer the Filmation version a little bit more.

Anybody could probably play Trap Jaw because he's a blue half-man/half-machine with a green face and a machine jaw and arm.  There are a few specific actors who I'd like to see get the role though. 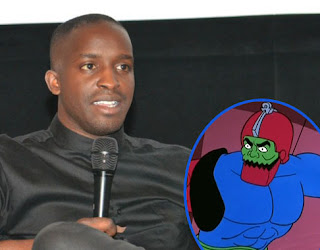 Elijah Kelley is one of the actors who could work in the role.  His IMDB Filmography list isn't incredibly large, but he's had a few big roles including starring in Hairspray and The Butler.  He's not a largely known name, from what I can tell.  That's got to be a good thing for those in charge of the budget though.

Born in 1986, Kelley is still pretty young, so he'd hopefully be inclined to sign on for a multi-picture deal (assuming that would be in the works).

These days a lot of casting tends to be going younger and younger, especially in super hero movies (see X-Men: Apocalypse and the Fantastic Four remake).  Kelley would fit right in with that group.  Since he was in Hairspray, I think he could handle the physicality involved with the role of Trap Jaw.  Have you seen some of those musical numbers?  They usually aren't done in one take and there's a lot of movement involved.

The only hesitation would be that Kelley is only 5'7" and probably about 170 lbs.  I'm not sure that he's got the size to play Trap Jaw. 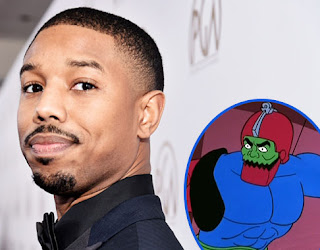 Michael B. Jordan is another young actor who could do well in the role.  He was in the critically-slammed box-office bomb known as 2015's Fantastic Four.  I did watch the movie and it had it's problems, but Jordan's acting wasn't one of them.

There may have been issues with the plot being rushed and no explanation as to Sue and Johnny Storm being related (half-brother/sister?  adopted brother/sister?).  Jordan at least did a good job in the movie though.

The thing that Jordan offers over Kelley is that he's a bigger name and that he seems to be a little more physically fit for the role.  He's all about doing superhero movies, too.  As stated above, he already starred in Fantastic Four.  He also just joined the cast of Marvel's Black Panther movie.  I doubt he'll be Trap Jaw, but I'd be satisfied if he got the role. 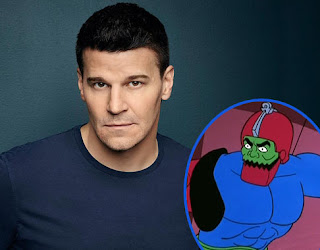 One actor who has the jawline for the role and the size is David Boreanaz.  He's been busy on the small screen for most of his career, keeping busy on Buffy the Vampire Slayer, Angel and Bones.  Outside of that, he really hasn't been in any big-screen movies.

I can kind of understand why.  His acting hasn't really ever been that impressive.

However he's a recognized actor.  Bones is one of the more successful shows (and longest running with 12 seasons) on TV.  I'm not sure what his pay day would be, but I can't imagine he'd come at too high of a cost since he's a TV actor rather than a big screen one.  It's not as though he's getting paid millions per episode like the cast of Friends or Seinfeld were.

Seeing as how he's been around for a long time, it makes sense that he's 47-years-old.  He's older, but he's kept in good shape, so I assume he could handle any action sequences that would come with the role of Trap Jaw. 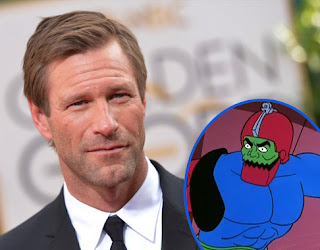 One of my favorites for Trap Jaw has to be Aaron Eckhart.  The 48-year-old actor has proven acting ability and did a good job playing Two-Face in one of the highest grossing films of all time: The Dark Knight (number 26, according to this list).

He may be 48-years-old, but he's kept in great shape over the years, so I'm not worried about him being able to handle any fight scenes.

I've got to go back to the acting as being his biggest draw though.  I like it when accomplished, respected actors sign on to play superhero roles because they give the characters a bigger sense of importance.  That's probably because they take the roles seriously, just as they would any other movie.  They don't look at it as a 'superhero movie.'  They look at it as a serious role and try to understand the character.

Eckhart may be a well-known actor, but he hasn't really been in too many headlining roles, so his price tag probably isn't too outrageous.  I hope they'd look at someone like Eckhart because he'd be a superb choice for the role of Trap Jaw. 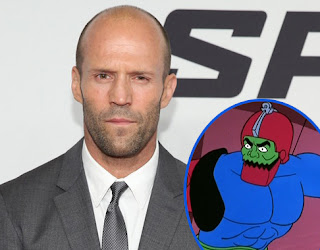 Lastly there's the guy who would probably be the best pick: Jason Statham.  Just like Eckhart, Statham is 48-years-old, but you wouldn't really be able to tell if you didn't Google him.  When you talk about someone who is aging well, you've got to mention Statham.  He's in better shape than me and he's almost 20 years older than I am.

Obviously you wouldn't have to worry, at all, about Statham handling any action parts of the movie.  He's pretty much made his name by being an action movie star, filling the void once left by Sylvester Stallone, Jean Claude Van Damme and Steven Seagal.  Unlike some of those guys, though, Statham is probably a little more talented as an actor than they are.

I don't know if he'll ever win an Oscar, but he's probably a less one-dimensional than Stallone, Van Damme or Seagal.  Statham would have to be my number one choice to play Trap Jaw because he's really got the best mix of all the talents it would take to play the role well.


One actor I've seen thrown out there as an option to play Trap Jaw is Ron Perlman. He would've been a good choice about 15 years ago, but they've taken so long to get this He-Man movie off of paper and into production that the 66-year-old actor wouldn't cut it anymore. He's a large dude, but at 66, I don't think he'd be as good as someone like Statham and I don't think Perlman would be the best choice in 2016.