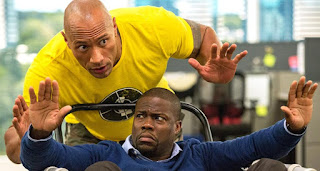 Ooh. I'm a bit disheartened writing this review because I had such high hopes for this one. Some people don't like Kevin Hart, but I think he's hilarious. He's got this charisma and style to his punchlines that just kills me. The Rock usually does well, too. He's one of the most successful dudes in Hollywood right now.

I figured Central Intelligence would be a great movie with those two involved. Unfortunately, I was wrong.

This was one of those movies where the trailer showed the best parts of the movie.

They took a different route than the typical buddy cop movie plot. Instead of having two guys team up to the save the world, they through a twist in there. The Rock's character -- Bob Stone -- was a good guy. Or was he bad? Or maybe good? Or bad? The storyline throughout the movie had you guessing whether his character was an insane bad guy or a misunderstood agent. 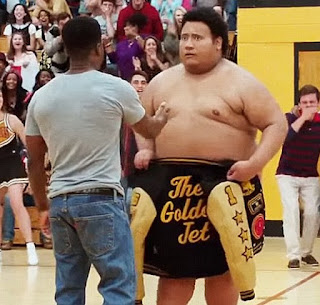 It was different. I'll give them credit for that. It didn't really pan out the way I assume they wanted though. It's not a classic cop movie like Beverly Hills Cop or Lethal Weapon or Bad Boys.

For some reason I wasn't invested into the plot. There weren't amazing jokes or incredible action scenes. It was one of those movies that just kind of ... was.

The movie started off as Stone and Calvin Joyner (Hart) were in high school.  Stone was fat and was the victim of a bully tactic by a group his classmates.  He ended up in front of the entire school, naked.  It was refreshing to see Calvin try to assist without hesitating.

Flash forward 10 years or so and things have changed.  Bob Stone is no longer fat.  Calvin Joyner is married to his high school sweetheart, but doesn't like his job and that seems to be spilling over into his lovelife.

Enter Bob Stone.  He's big and chiseled so he's the cool guy now, even if he's wearing a Unicorn t-shirt and a fanny pack. 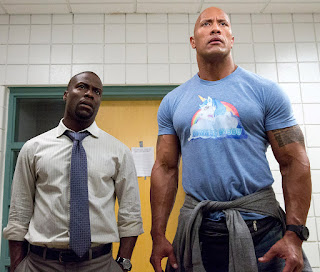 Calvin gets caught up in Agent Stone's sorted tale of espionage because he only has a certain amount of time to solve a case.  But when the CIA shows up and says that Bob Stone is an unhinged agent-gone-rogue, it's plausible.  Who does Calvin trust?  Who does he help?

He's stuck between a rock (no pun intended) and a hard place.

I think that's where the movie went off the rails.  They introduced this way too soon.  Sure, Bob and Calvin bonded throughout the movie, but the doubt about whether or not Bob was the real bad guy or whether the CIA just had the wrong intel was always lingering.

Again, not a bad idea, but it didn't result in an entertaining movie because the story wasn't good enough. Kevin Hart did a great job playing a bewildered regular guy who ended up intertwined in a confusing CIA case. But that's really the only memorable part of the movie. 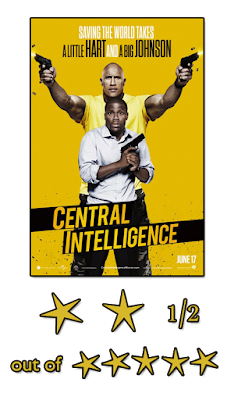 I'm struggling right now to come up with one single punchline from this movie.  There wasn't too much that was memorable in this movie.

I guess The Rock's fat suit was impressive at the beginning of the movie.

And there was the scene where Bob Stone was playing therapist to Calvin and his wife.  That was alright.  I'm assuming there was some improved acting in that sequence.

The story unfolded in an alright way, but it wasn't very entertaining.  I was waiting for it to be over, almost.

There was a surprise appearance by Melissa McCarthy, which was fun. It didn't last long enough though.


Related Content:
• Nine Lives - reviewed.
• The Jungle Book - reviewed.
• 10 TV shows and movies that STILL aren't on DVD, but should be