One of my co-workers asked me the other day if The Jungle Book was any good. 'I hadn't seen it,' I said, 'so I'm not sure.'

But, the other night I saw it on Netflix and thought, 'Huh. Why not?'

I wasn't expecting too much. I'm still kind of torn on this whole 'live action Disney classics' thing that Disney is going forward with these days.

I haven't seen the live action Cinderella, so I'm not sure if that was any good. Maleficent was very good. I'm intrigued by The Beauty & The Beast. The original trailer, with a minimal glimpse into the movie, looked good, but have you seen the Beast? The costuming/CGI combo looks like the work of an amateur -- not that of a multi-billion dollar company like Disney.

I was never a huge fan of the animated Jungle Book movie anyway. It wasn't bad. I loved the songs. I remember singing the Bare Necessities when I was a kid. Even though the movie wasn't one I watched again and again, I was a big fan of Tail Spin (the Disney Channel's spin-off show in the mid-90's). 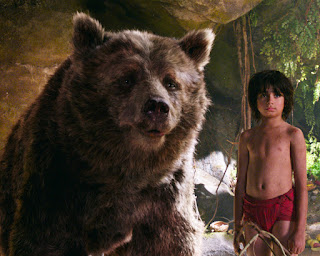 There The Jungle Book was just one click away on Netflix. So, I gave it a shot. I'm glad I did! It was a very good movie.

I wasn't sure how they would do with the computer graphics. Obviously there wouldn't be real animals like in Life of Pi. The tiger's work in that movie was pretty much sitting there.

The animals in The Jungle Book have to interact with Mowgli, so CGI is to be expected.

It was really good work though. Not shabby at all. Take a look at the picture to the left. Not bad, right?

I didn't remember the entirety of the original Jungle Book story, but I remembered most of it. This one did deviate a little bit, but not in a bad way.

It was in more of a 'this movie needs to be updated in order to be a live action movie in 2016' kind of way.  I'm not a fan of movies that change large parts of the originals, so I was happy to see that they didn't do wrong by the classic animated version. 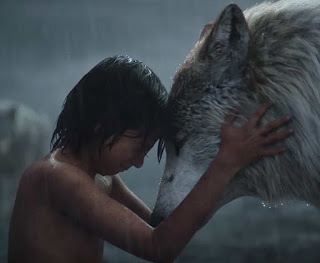 Besides crappy CGI and script changes, the one other worry I had was bad childhood acting. I'd say 75% of child actors are not good. 15% are OK. 5% are good. The remaining 5% are great. This actor -- Neel Sethi -- was awesome.

He showed an entire range of emotions -- fear, anger, happiness, confusion -- and he displayed them all at the right times. Of course, he also looked the part.

He seemed like an agile kid, too, climbing on things and running through the woods. It was quite a physical role, really.

I don't know what he was like to work with, but the staff behind this project better thank their lucky stars that he was on board for the movie because without him -- that movie could've been completely awful. 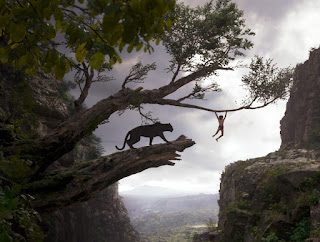 The voices of the rest of the characters included: Scarlett Johansson as Kaa, Ben Kingsley as Bagheera, Bill Murray as Baloo, Christopher Walken as King Louie and Idris Elba as Shere Khan. Each one did a wonderful job. No complaints at all on any of their performances.

Kudos have to go to Murray and Walken for singing in the movie too (what is The Jungle Book without a couple of its classic songs?).

We start off with Mowgli doing just fine in the jungle, living with the wolves, until Shere Khan rears his one-eyed head (having dealt with man and fire before). He's not happy that a man-cub is living in the jungle.


You don't get the entire backstory through one flashback right away. It's interwoven a little bit throughout the movie. Good decision for the pacing of the movie because it heightens the emotions as things unfold. 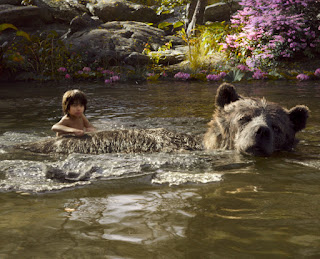 Of course, Mowgli takes his leave and ventures out on his own. Cinematically it's quite stunning to see the mixture of real-life and CGI. The setting looks real and things pick up very quickly, but the plot is a bit of a downer until Mowgli gets out into the jungle.

It's, of course, a little mysterious, as Kaa makes an appearance, but once Baloo shows up, the entire mood of the movie changes.

I don't know if Murray had any ad-libs in this movie, but his performance of Baloo was spot-on. With some much-needed comedy interjected into the plot, the movie only gets better. 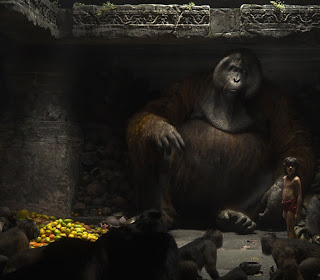 But Mowgli's life isn't without problems, of course. In comes King Louie. I guess if I had one complaint about the movie, it'd be the exaggeration of King Louie's size as an Orangutan. Upon reading a little bit more about what the moviemakers had in mind, though, it wasn't a bad choice.

King Louie wasn't in Rudyard Kipling’s original stories as the Orangutan wasn't native to India. Apparently during research, the moviemakers found out the there was a giant extinct version of an ape that in the area: a Gigantopithecus.

So, King Louie became a Gigantopithecus. Makes sense, since he is supposed to be a king of the monkeys.

I don't want to spoil the entire movie -- although most people know the general plot of The Jungle Book -- so I'll just say that the climax of the movie doesn't disappoint. 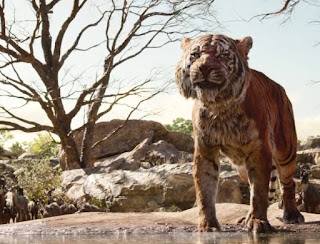 Overall, really good. My second complaint about the movie, I guess, would be that I kept thinking, 'If all the animals team up, surely they can beat one tiger.'

I mean, I get that Shere Khan is a dangerous tiger who is bigger than Bagheera (the black panther) or any of the wolves, but if they all teamed up and got maybe a rhino involved, too, don't you think they could come out on top?

It's nitpicky to complain because it really is a very good movie. Put aside a couple of minor things like that and it's all good. 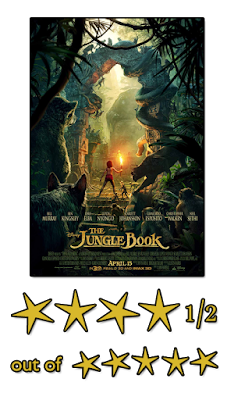 Between CGI and a child actor as the main star of the movie, this movie could've been really, really bad.

What could've added up to a disaster ended up being a surprisingly good movie (I read that it was apparently a surprise hit in the box office as well).  I don't know if anyone was expecting this to be the successful movie that it was.

You would've thought that a more recent classic Disney tale might be more lined up for box office success, but it's kind of poetic that this underdog of a movie ended up making a good bit of money.

I've got to say, again, how surprised I was that this was a good movie. If you haven't given it a chance yourself yet, I'd highly recommend that you do.