Disclaimer: this review is written by an unabashed super-hero fan-boy nerd and may contain some bias.

I finally broke down and went to see The Avengers at AMC last week. I loved both Iron Man movies, I own both of The Incredible Hulk movies. Thor was a good flick too. The Captain America film wasn’t my favorite, but I enjoyed watching that one too. I was really anxious to see The Avengers, but I made a decision to wait until it was at the Redbox.

See, when it comes to super heroes, there aren’t many I don’t like, but my allegiance always has to go to Batman. I was reading so many articles about The Avengers doing so well at the box office that I figured I’d better make sure my money goes to The Dark Knight Rises. The predecessor, The Dark Knight, is already on the top ten list of the most grossing movies of all time. I don’t want to see the Batman series edged out by The Avengers.

I caved though. Seven dollars of my money went to The Avengers’ total earnings.

I hadn’t seen any previews for the movie, so I went into it hoping the different characters would mesh well and make for as good a movie as the previous individual films. It turned out the interaction between the heroes was really what made the movie awesome.

The screenplay, penned by Joss Whedon, was expected and basic. It was the typical, ‘aliens from outer space try to invade and destroy Earth’ shtick. I can’t complain too much about that. After all, I think that’s a large part of the appeal of super heroes and the big-screen adaptations. A giant portal above a skyscraper of a major metropolitan U.S. city is the essential super hero movie calling card. 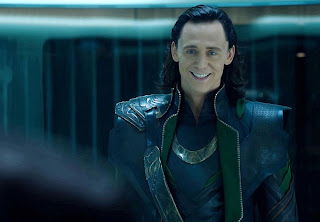 Loki (Tom Hiddleston) is the perfect choice to lead this attack. He’s your classic super villain – one part weasel and one part manipulative – someone you just love to hate.

What made this attempted alien invasion fun to watch was seeing the group of super heroes team up to defend Earth. Not only do you have Iron Man zapping invaders while zig-zagging between skyscrapers, but you have Hulk smashing them to smithereens at the same time!

There’s a bit of in fighting too amongst the Avengers. After all, a team of super heroes randomly joined together needs some time to develop chemistry and earn each other’s trust. At one point we get a bit of Thor vs. Iron Man vs. Captain America.

Watching the friction and relationships develop between the various comic book-turned-big-screen super heroes was very exciting, but it was the one-liners by Tony Stark/Iron Man that stole the show. I can’t think of someone who could portray that character as well as Robert Downey Jr. does.

His lines brought levity at all the right moments and actually seemed to progress the plot forward more than most of the other characters. The writers did a good job with him. It makes sense. They did have two entire films to develop that character, whereas it still feels like we’re getting to know Captain America, Thor, Hawkeye and Black Widow.

It’s probably not entirely hard to make The Hulk’s alter-ego Bruce Banner work, but kudos to Mark Ruffalo. Despite there being two recent big-screen versions of The Hulk out there, each time we see Bruce Banner, he’s portrayed by a different actor. Mark suited the role well.

Did I mention Scarlett Johansson’s skin-tight catsuit? That’s definitely a nice contrast from The Hulk. I’m not sure who did casting for the G.I. Joe films, but ScarJo proved she would’ve been a good candidate for the role of G.I. Joe’s Scarlett. She even has the same name!

A tip for all of you who are still planning to go see The Avengers: don’t tune out once the credits hit. Marvel added an extra scene at the end, leaving a sneak peak for what’s in store for The Avengers 2. I’ll probably be going to that one opening weekend.

As for The Dark Knight Rises? I’ve got to do my part to make sure that ends up at the top of the box office, so I’ll just have to go see that one in the theatres twice. :)