I decided to be brave. After the success that I had with Battleship last week, I figured I would check out Taylor Kitsch’s other box office bomb, John Carter. I never saw the film’s previews, but I remember seeing the cover sometime last year and thinking, “It could be good.”

I thought John Carter was an odd name though. It seemed like the name of a movie about a piano teacher in a small town in the 1940s, or maybe the main character in a football movie. It just didn’t seem to fit with a movie about action and adventure.

According to the description, it’s a film about a soldier who is transported to Mars and becomes embroiled in a clash between different social classes. Whichever group wins this battle could very well end up with the fate of the planet in their hands.

It does sound like a storyline you’d find in a B-movie, but with Disney’s budget behind it, at least I didn’t have to worry about the production quality.

I actually really like the idea though. A soldier from Earth gets transported to Mars and does battle there. It’s original enough.

After watching the film, I can say, much like I was with Battleship, I’m baffled at why John Carter was such a bomb. I can see why it wouldn’t win an Academy Award – it’s purely an adventure tale after all – but John Carter was every bit as good as box office hits like Thor, Snow White and The Huntsman or G.I. Joe.

In John Carter, there’s a medallion that transports people from planet to planet, some cool action sequences, and a female Jar Jar Binks-like character (I think I just figured out why it flopped…though I never minded Jar Jar that much). 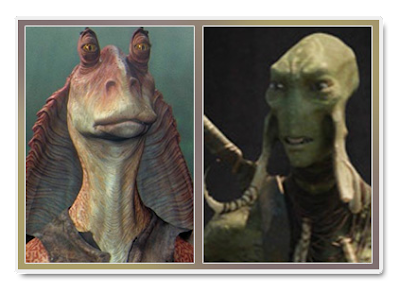 To top it off, Lynn Collins is absolutely seductive in a skimpy wardrobe. Kitsch’s impressive physique made me feel guilty about eating the piece of chocolate cake I was eating while I watched the film. It has the eye candy covered for both guys and gals. 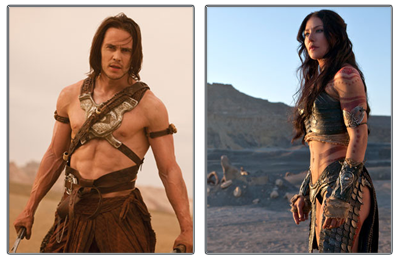 The plot is very standard in a sense. The guy needs to rescue the girl (a princess, who can hold her own with a sword) from the bad guys, there are a couple of comedic sidekicks, evil men with magical powers and the goal to manage the destruction of the planet. Of course the princess is being forced into marriage for the sake of saving her planet. All the while there’s a bigger picture takeover planned.

While that may have been standard, there was a nice twist at the end. John Carter wasn’t a soldier in current times, like I was expecting. He was a soldier sometime during the Civil War, so the film was set sometime after that. That was something a little different as well.

I guess John Carter can now join Prince of Persia: The Sands of Time. as Disney’s list of flops. I didn’t mind that movie either. 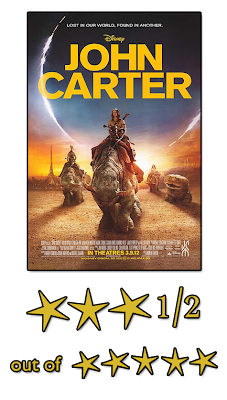