My most anticipated movies of 2013

Well now that we know the world isn’t going to end (whew!), we can focus on next year.

As the new year approaches, it’s natural to wonder what the next 365 days has in store.

You could choose to focus on which new year’s resolutions to make. Or maybe pat yourself on the back for successfully accomplishing items on this year’s list.

There are other important things to think about though – like which 2013 movie is going to be the most awesome.

There’s quite an impressive list that’s scheduled for release in the next 12 months. Here are the standouts in my mind:

6. Thor: The Dark World (Nov. 8)
Chris Hemsworth reprises his role as the God of Thunder next November. After Thor’s decent original outing at the boxoffice and 2012’s super-successful Avengers, I don’t think the Marvel executives have too much to worry about with this one. It’s pretty much a guarantee that it will do well. Tom Hiddleston is returning as “Loki” and Princess Amdala (aka Natalie Portman) will return in the role of, "Jane Foster," Thor’s love interest. I’m most excited to see Anthony Hopkins returning as Odin though. If he can provide us with another moment like this, then I’ll be mark out.

5. The Wolverine (July 26)
It’s Wolverine’s first big-screen appearance since 2009’s X-Men Origins: Wolverine, which didn’t fare so well on the box office charts. Personally, I thought the movie was pretty decent. I was thrilled to see two of my favorite characters – Gambit and The Blob – have appearances in the film. Origin’s main mutant villains were Sabertooth (Liev Schreiber) and Deadpool (Ryan Reynolds). The film showed us how Wolverine got his Adamantium claws. The Wolverine is apparently supposed to be a stand-alone film, following the events of X3: The Last Stand. It should be a pretty cool flick. I’m assuming we’ll see some ninja fighting since the movie is set and was filmed in Japan. Wolverine’s foe this time around? The Silver Samurai. I remember Samurai looking pretty impressive on some trading cards I used to have back in the 90s, so I’m anxious to see him come to life.

4. G.I. Joe: Retaliation (March 29)
To be honest, I’m not sure how well this movie will do. I’m not sure how good it will be. I am disappointed that the story line will have very little continuity since most of the cast from the first film was not asked to be involved in the second. I hate bad continuity.

However, there are three reasons I’ll be seeing this one in the theatres. The first is Jinx. 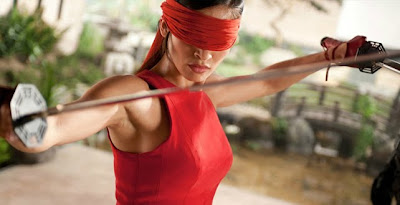 She’s a ninja who does her combat blindfolded. She was originally a character in the animated film G.I. Joe, released in 1987. The production still of her looks pretty damn cool.

The second reason I want to see G.I. Joe 2 is because of the mountain-side fight scene. I saw it in a preview clip and ever since I saw that, I wanted to see the movie itself. I would imagine it’s pretty difficult to come up with entertaining fight scenes after the influx of hero and combat movies in the past 20-some years. I’ve never heard of a mountain-side fight scene though. Looks pretty cool. 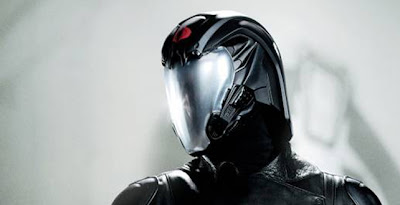 I liked Joseph Gorden-Levitt's portrayal of ‘the Doctor’ in the first G.I. Joe film, but I was disappointed that he wasn’t a full-fledged Cobra Commander. I think a lot of fellow G.I. Joe fans felt the same way. Well, the makers of G.I. Joe 2 seemed to have listened because the photos of Cobra Commander look awesome!

3. Star Trek: Into Darkness (May 17)
I haven’t seen the opening 9-minutes yet because I haven’t been out to see The Hobbit yet. Actually I don’t want to see the opening 9 minutes. I’d rather wait and let it all be fresh when I see the movie in its entirety. I was definitely on the Star Wars side of the fence growing up, but after seeing 2009’s Star Trek, I’ve been getting more and more into the franchise. I have some of the original movies on my Netflix list now. I’ve read that some fans are pretty excited about Benedict Cumberbatch being in the film. Apparently he’s the villain. I’ve never heard of him before. I guess I will in about six months.

2. Iron Man 3 (May 13)
When he’s not entertaining alongside Jude Law in the Sherlock Holmes series, Robert Downey Jr. is delivering witty comebacks as Tony Stark. He’s taken that character and turned it into a trilogy (with hopefully more to come). I’ll admit, I was never a huge Iron Man fan. I remember seeing him make a cameo on the animated Spider-Man series on Fox Kids and I thought he was a pretty cool character, but after seeing Iron Man in 2008, I was hooked. The sequel didn’t disappoint. Iron Man’s parts in The Avengers were perfect. I definitely have expectations that the third Iron Man film will deliver. I really don’t have any doubt that I’ll be just as entertained with this one as I was with the first.

1. Man of Steel (June 13)
What could possibly beat out Iron Man? How about The Man of Steel? It’s freakin’ Superman – back in a major way, with Christopher Nolan telling his story this time around. After Nolan’s immensely successful Dark Knight trilogy, there’s definitely some pressure on this film. After seeing two of the preview clips, it’s highly anticipated in my book. The previews alone leaves you going, “This is going to be epic!” 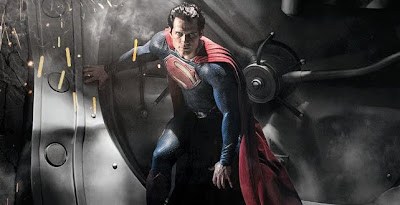