Though they aren’t native to Charlotte, Wal-Mart and Target both carry Kimberley’s Bakeshoppe Gourmet Cupcakes. 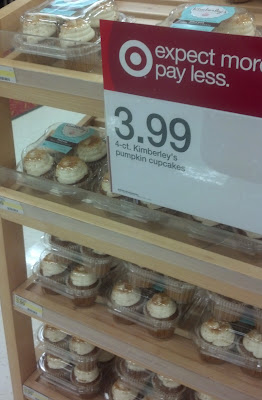 They look like something you’d find in the display case of a bakery, rather than in a four-pack on a shelf at a big box store.

Therefore, it qualifies as a candidate on my quest for Charlotte’s best-tasting cupcake.

Plus, it’s an excuse to have something sweet.

As a faithful fan of anything red velvet, I went with that option.

It was a tasty treat, but there were a couple of downfalls with this cupcake.

First, it was tough to get it out of the plastic case and wrapper without becoming a frosting-fingered mess. There was just too much frosting on the top. 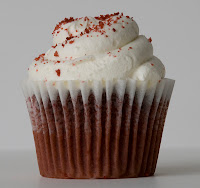 Come to think of it, that was the same problem I had when eating it. There was just too much frosting. It wasn’t needed since it was already filled with cream cheese. The cupcake, the cream cheese, and the frosting made for a successful combination.

The frosting didn't taste like it was freshly made, but given that it came from a package, I can't complain too much. I guess these could be likened to a fast food version of a red velvet cupcake. It fills the need, but it's not going to surpass a real bakery.

If it weren’t for the excessive frosting, I can’t say I’d have any complaints. I can’t say it was amazing, but it was good. I’m still enticed to try the triple chocolate and the vanilla bean cupcakes, so that says something. It may just mean that I’m a cupcake addict, but it says something. 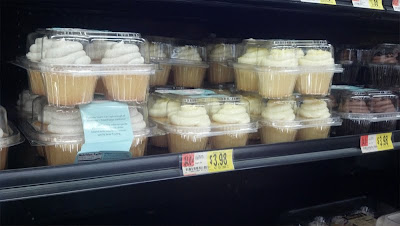 The positives: The cupcake didn't fall apart on me. Both the cupcake and the frosting had good taste to them.

The negatives: there was just too much frosting for the cupcake!

Cost: at four cupcakes for about 4 dollars, it's probably the cheapest deal you'll find in Charlotte.