After trying store-bought cupcakes from Target and Wal-Mart last week, I went the opposite direction this week – literally and figuratively.

I made a stop at Sunflour Bakery, off The Plaza.

It’s a bakery that is dedicated “to creating fresh baked goods every day from scratch with ingredients that are organic and local whenever possible.”

“At Sunflour, our products are real food made without artificial ingredients, hydrogenated oils, preservatives, or dough conditioners so that you can trace the food back to its basic ingredients and origins.”

I stopped Saturday afternoon – less than 10 minutes before closing time. They have new winter hours. Despite me stopping in at a point when they were probably cleaning up, the staff gave me a friendly greeting.

I didn’t have a lot of time to look around, but thankfully I took a look at their Facebook page ahead of time. I knew they had a Rolo cupcake – a dark chocolate cake filled with house made caramel and topped with dark chocolate buttercream.

I did a quick look and saw a caramel cupcake as well. It’s not listed on their website, but it was an option the day I stopped. With caramel drizzled over the top, who could resist getting that?

I ordered the caramel cupcake and was set to get the Rolo cupcake when I saw another – this one was with pink frosting. There wasn’t a label in front, so I asked the clerk what it was.

He told me it was a new cupcake they were experimenting with – a Strawberry Shortcake cupcake. Well, I figured I’d be a good guinea pig, so I left the Rolo behind and went with the shortcake. 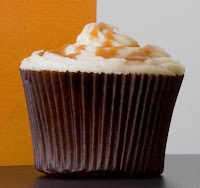 I ate the caramel cupcake first. Wow! Talk about the perfect blend of ingredients! I don’t know if I’ve had a cupcake before that melded the tastes so seamlessly. It tasted fresh and sweet. It wasn’t overkill though. Sometimes you can feel the cavities forming because the frosting on certain cupcakes is so sweet. This one wasn’t like that. The caramel drizzle on top was like the cherry on a sundae. It rounded off a great combination of flavors. To be perfectly honest, I wasn't expecting it to be as good as it was. 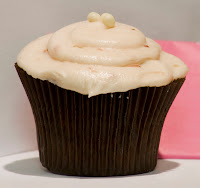 The Strawberry shortcake cupcake wasn’t as good as the caramel. It was stiff. Although, perhaps that’s to be expected since I bought the cupcake 10 minutes from closing time. Or maybe it was the natural ingredients. Overall it tasted good. The strawberry frosting was delicious, if not a little too sweet. Not a bad cupcake, but it paled in comparison to the caramel flavored cupcake.

The positives: the caramel cupcake was incredible!

The negatives: the Strawberry shortcake was a little tougher than I was expecting.

Cost: This one is a little more expensive. $3.00 for one cupcake isn’t terribly cheap, but the caramel cupcake is well worth a stop at least once in a while.