It's Oscar weekend! What better way to celebrate than by watching the 16th President of the United States hunt vampires?

Lincoln seems like a shoe in to win some awards (it leads the ceremony with 12 nominations), but I haven't seen it yet, so I can't put up a review on it. 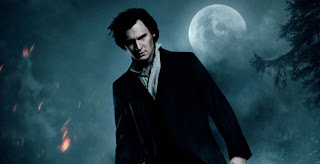 Instead, what I offer you, is Abraham Lincoln: Vampire Hunter.

It wasn't half bad.

I was confused for about the first half hour, however. I was browsing through the Redbox selections and saw Abraham Lincoln vs. Zombies. I fully intended to get Abraham Lincoln: Vampire Hunter -- and I did -- but, for some reason, I had zombies on the brain. So there I was watching the movie about vampires thinking I was watching, thinking, "Boy, these zombies sure act like vampires."

Well, that would be why. I was watching Abraham Lincoln: Vampire Hunter.

The movie quality kind of reminds me of Twilight -- in that it's not a spectacular cinematic experience, but it's not quite indy either. It works for what the movie was.

The special effects on the vampires do look kind of cheap, but, again, somehow it works. They kind of look like zombie vampires. No glistening skin in this movie.

Anyway, the story gets rolling right away. It all makes sense too. The plot of Abe Lincoln (played by Benjamin Walker) becoming a vampire hunter doesn't seem out of the realm of possibility after his mother dies from a vampire bite.

He learns the tricks of the trade from a veteran vampire hunter -- Henry Sturges (played by Dominic Cooper). There's no Buffy the Vampire Slayer weapons. There's no 20th century technology. 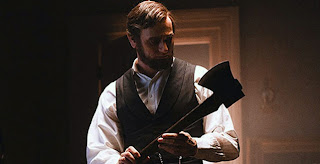 After a training montage, Lincoln goes onto hunt the vampires -- all the while wanting to get revenge for his mother's death.

The movie ties in the actual historic aspects Lincoln's life -- marrying Mary Todd, getting into politics, becoming President, and issuing the Emancipation Proclamation -- along with the movie plot. It all intertwines without any glaring oddities.

There is a fight scene that will forever prevent this movie from becoming anything more than a B movie cult classic. In this scene Lincoln and the vampire battle in a stampede of horses and jump from horse back to horse back as though they were jumping on rocks across a river. 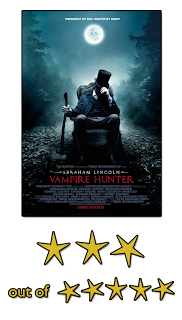 Putting that little scene aside, the rest of the action was pretty cool. Lincoln ages throughout the movie.

There's a big fight scene at a southern plantation and another scene later, on the top of a moving train. They didn't jump from box car to box car, so that one didn't hurt the credibility of the movie.

The movie ends on the day of Lincoln's death.

If it weren't for that horrible horse jumping scene, I'd have given this movie a better ranking.