After a break from the cupcakes last week, I was back on track this week. This time I chose Cupcake Delirium.

It was a little tougher to coordinate because you can't necessarily swing by Cupcake Delirium as easily as some of the other places I've tried. That's because Cupcake Delirium does business off their website or out of their food truck.

They have free delivery in Charlotte with a $30 minimum order. I didn't need that many cupcakes, but there's a $5 charge if you order anything less than $30, so rather than ordering off the website, I tracked down their food truck.

I got the Vermont Jemima (anything with maple is a must for me), the Cookies & Cream, the Twisted Snickers, and the Velvet Bottom. Warning: you may want to get two sets of cupcakes. They look so nice that you don't want to mess them up. Seriously, they looked amazing -- like little works of food art! It was like, 'These are gourmet cupcakes.'

They put the cupcakes into upside down plastic cups. This way you can order just one and take it with you if you're out and about walking around. 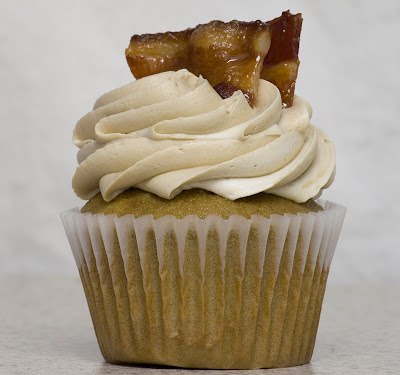 Vermont Jemima
It was the first cupcake I bought and the first cupcake I ate. This maple cupcake was topped with maple butter cream and candied bacon! I've always wanted to try a cupcake with bacon. I've seen it, at times, on some of the baking competitions on the cooking channels. It didn't disappoint. I thought the caramel cupcake from Sunflour Bakery was amazing, but this maple cupcake really did blend everything together perfectly.

I was kind of worried when I got it. I love maple, but when maple frosting isn't done right, it can taste pretty horrible. That wasn't the case at all though. Every bite was a perfect mix of maple cupcake and maple frosting. The candied bacon was like the cherry on top of the sundae. 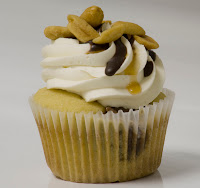 Twisted Snickers Cupcake
This was the second cupcake I ate -- the same day I ate the Vermont Jemima. I didn't know how well the cupcakes would keep in the refrigerator, so I figured it was best to eat them somewhat quickly. You can imagine what the Twisted Snickers is. It's a vanilla snickers cupcake with caramel & ganache, sprinkled with salty peanuts on top. There was a chunk of a Snickers bar baked into the cupcake as well.

Honestly, there were a little too many nuts on top for my liking. I like Snickers candy bars, but mostly because of the caramel and chocolate (I'm waiting for the days of a Milky Way cupcake!). That being said, the cupcake tasted amazing. I had to use some floss after I was done, but that effort was worth it. 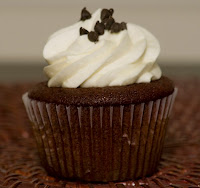 Velvet Bottom
I thought this was just a Red Velvet cupcake (I didn't read the description on the menu when I bought it). Boy was I wrong! It's a red velvet cupcake with a choclate chip cheesecake center. Wow! It was almost like one of those lava cakes with the chocolate in the middle. With chocolate chip sprinkles on top it was a great twist on your regular red velvet cupcake.


Cookies & Cream Cupcake
I ate this one two days after I bought it. It was in the refrigerator, so I warmed it up in the microwave for about 15 seconds. The chocolate cupcake was nice and warm. The chunk of Oreo cookie butter cream frosting on top was still a little cold, so it made a really cool treat. It was like a brownie with ice cream -- all Oreo flavored. Just like the other cupcakes, there was a little something extra on top. In this case it was an Oreo cookie.


The positives: these all tasted incredibly good, yet very different at the same time. Cupcake Delirium really nailed the mix of flavors on each cupcake.

The negatives: too many nuts on the Twisted Snicker. That's the only minor complaint I have.

Cost: at four cupcakes for 10 dollars, it equates to $2.50 a piece. Granted, that's a lot more than four Kimberley’s Bakeshoppe cupcakes (under a dollar a piece), but the quality really is a lot better. If you get the four pack, it's $.50 cheaper than most cupcakes in Charlotte, which sell for $3 a piece. If you're just getting one, the $3 per cupcake price is right in line with most of the other bakeries.