It's been almost a week, but Pink's performance at the Time Warner Cable Arena in Charlotte still has me amazed.

I had previously mentioned that I had a small amount of hope that Pink would soar high above the arena the way she does in her televised performances. I wasn't actually expecting it, however, so when she ended up doing just that, I couldn't have been more surprised and entertained. 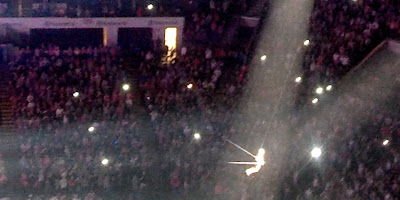 The entire night was like a string of some of her greatest hits, performed just as she does them on TV.

In "Try," Pink used some of the same choreography she used during her AMA performance last year.

The stunts in "Sober" were changed from her VMA performance, but it worked well. She

She added a few new twists though. "Family Portrait," for example, which was performed halfway through the show, was a stripped down ballad, accompanied by a piano. I actually like that version better than the original, which as never been a favorite of mine. I would like to see a re-release of that one.

Maybe that's what Pink could do while she works on new material -- release an album full of re-works. Some acoustic, some instrumentals changed on some songs, etc.

Meanwhile, other songs -- like "Raise Your Glass," "Walk of Shame," "U + Ur Hand," "Slut Like You," and "Are We All We Are" sounded so good it was as if they were being played off the CD itself.

There was a little homage to her early days in the form of a medley of "Most Girls," "There You Go," and "You Make Me Sick."

One of the most interesting moments was when Pink covered Chris Isaak's "Wicked Game." It's amazing how much Pink has evolved, vocally. "Wicked Game" showcased that nicely.

Two underrated tunes (and also two of my favorites) were also included in the set list: "Leave Me Alone (I'm Lonely)" and "How Come You're Not Here?," which Pink revealed is one of Carey Hart's least favorite songs.

She closed the show with my two favorite performances, the high-flying version of "So What" and a straight-off-of-the-Grammy's performance of "Glitter in the Air." 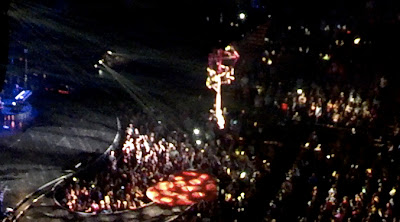 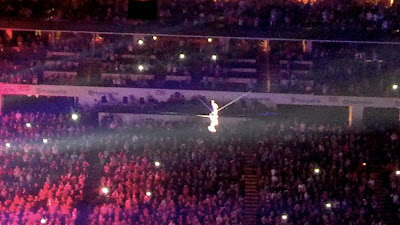 The only awkward moments were the sensual goth-ballet-like performance between two female dancers and another bit of more risque choreography. If it were a Britney Spears concert, it would be expected, but they really weren't needed with these set of performances. Pink is good enough to entertain without that kind of thing.