Charlotte Cupcakes - Bake Me A Cake

I got a nice surprise this week.

After two weeks of cupcakes that weren't as amazing as I was hoping for, Bake Me A Cake blew me away with their incredible cupcakes!

They're located in North Charlotte, off W.T. Harris Boulevard. I was Googling their webpage when I noticed that they also had a location at Northlake Mall. Low and behold, I was at Northlake Mall at that moment.

Sure enough, on the lower level of the mall, outside of Abercrombie & Hollister, there's a Bake Me A Cake stand.

I was there close to 6:30. Since they were about to close, they discounted the cupcakes to $1.50 a piece. Sweet deal!

That being said, even if the cupcakes cost $3.00 each they would have been worth it.

I chose four of the multiple flavors they had available. 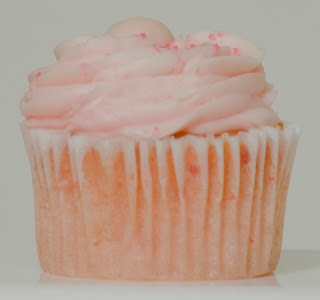 I've been on a strawberry cupcake kick the past several weeks that I've been doing these reviews, so I had to start with that one. It was amazing! The strawberry (all the cupcakes that I tried) was more like a small muffin. It was compact and soft, but there wasn't a lot of fluffiness to it. There was some substance to it.

Atop the strawberry frosting was a pink Whopper candy. It honestly wasn't needed, but the Whopper made a nice topping for the cupcake. 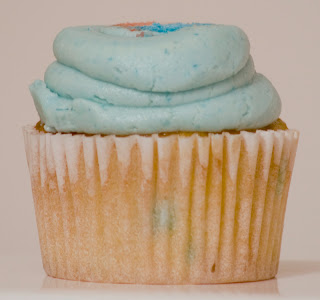 I was so intrigued by the cotton candy cupcake that I had to test it out. The blue frosting did taste like a frosting version of cotton candy.

It was sweet and blended in perfectly with the cupcake. It was almost like the Bubbalicious gum in cupcake form. 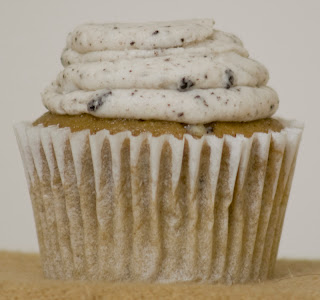 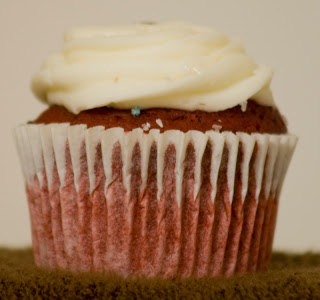 The red velvet cupcake was just as good as all the others. There was a hint of chocolate in it and on the top of this one was a regular Whopper. Again, not needed, but it didn't hurt the cupcake at all either.

The extra sugar sprinkles on top were a perfect addition.

The positives: The frosting was great. The cupcakes were great. The blend of the two was amazing!

The negatives: The strawberry was my least favorite of the bunch, but even that was incredible.