This week I decided to go North.

I went to Cornelius to check out a cupcake shop I found online: Just Baked Cupcakes & Coffee House.

They have a nice, little store. Because it's part coffee house, part cupcake shop, it has a different vibe than any of the other shops I've been to. 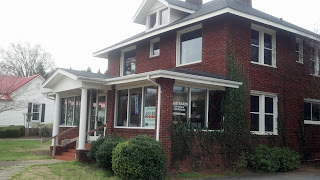 It's in a brick home on Main Street in Cornelius. There are a couple of tables and a few chairs right as you walk in. With a gas station right next door, the shop is definitely a nice place to stop and get a snack if you're on a road trip. 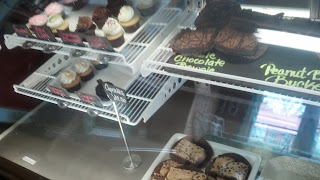 They have different flavors each day. That's a good way to get people coming back day after day. When I went they had about five or six to choose from.

In addition to cupcakes they have various other kinds of bars, brownies, and cookies. I was there for the cupcakes though! 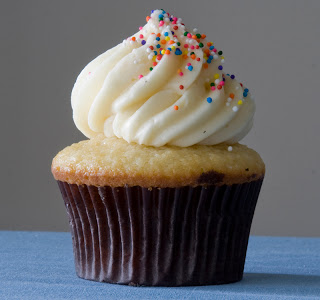 The first one I had was the Sugar Cookie cupcake, which, remarkably, tasted like a sugar cookie. Topped with the sprinkles you'd find on an actual cookie, the vanilla butter cream frosting was pretty much spot on. Mixed with the cupcake, it carried the same flavor as a cookie.

The cupcake wasn't incredibly big, but it was filling. The amount of frosting worked well too. There was enough for each bite of cupcake. 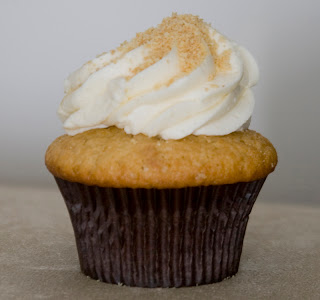 It did have a Peanut Butter taste, but there wasn't a burst of taste with each bite -- more like a hint of it. Despite none of it actually tasting like real Peanut Butter, I think there was too much of the same flavor between the flavored cupcake, the frosting and the crushed crumbs on top. Not bad at all, but if I stop back at Just Baked, I'll probably go for a different flavor. 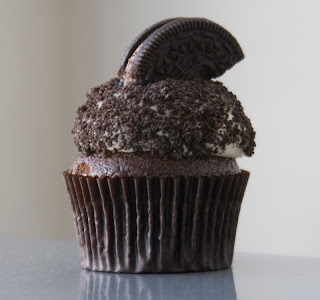 Last, but not least, is the most impressive looking cupcake of the bunch: the Cookies & Cream cupcake. This one is a chocolate lover's dream come true -- possibly more accurately called the, 'Oreo Cookie cupcake.'

It's a chocolate cupcake is topped with butter cream. On top of that are crushed Oreo cookie crumbs. On top of the crumbs Is half an Oreo cookie. I love sugar cookies, but this one was actually my favorite of the bunch. The crushed crumbs and the cookie on top took it to that next level. 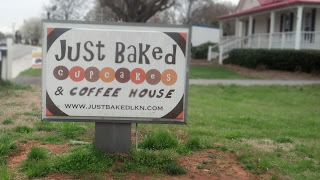 The positives: All three cupcakes tasted very good. The sprinkles and crushed Oreo cookies were the proverbial icing on the cake.

The negatives: The cupcakes aren't incredibly large. They aren't mini's by any means, but if you're looking for a jumbo cupcake, this isn't the place to get it.

Cost: at $2.50 each they are cheaper than some of the cupcakes in Charlotte.