After a somewhat disappointing stop at Suarez Bakery last week, I gave Tizzerts a try this week. The two bakeries share a home at the Park Road Shopping Center.

The display case was filled with delicious looking cupcakes. 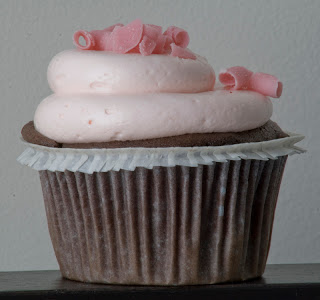 Strawberry Swizzle
This one looked appealing. With pink white-chocolate shavings sprinkled on top of the pink frosting, it looks like a designer cupcake.

It's a chocolate cupcake that's filled with strawberry pastry cream. The cupcake wasn't bad. It wasn't extremely moist, but it was soft and tasty.

The frosting had a little bit of flavor to it, but what I particularly noticed is that it was the most silky smooth, creamy frosting I've ever had.

If Cool Whip got together with butter and a little bit of pink food coloring, the Strawberry Swizzle frosting at Tizzerts would be the result. 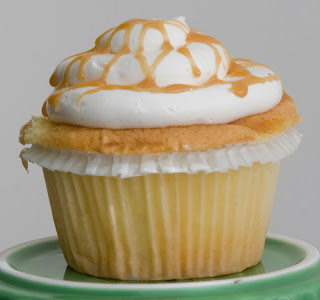 Salted Caramel Cupcake
The cupcake was really, really savory. It was so good you could probably eat it without any frosting. That’s a good thing in this case because the frosting had zero flavor. It was just a whipped-type of topping with some caramel drizzle on top. The caramel on top of the frosting is where any good flavors came from.

The yellow cupcake is filled with salted caramel pastry cream, but you don't notice it too much. It's not offensive and it blends in well. 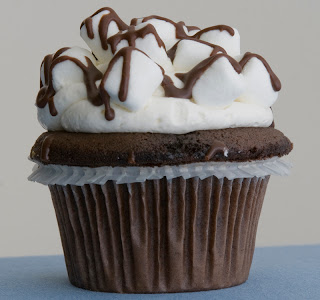 Hot Chocolate Cupcake
Who wouldn't want to try this one? The name alone makes it sound amazing! To be honest, it looked really amazing in the display case as well.

It's a devils food chocolate cupcake, filled with pastry cream, and topped with vanilla buttercream and mini marshmallows. Adding to it even more is the chocolate ganache drizzle.

In a way it was the best of the bunch -- simply because it all meshed together the best. The frosting still wasn't as flavorful as I would have preferred, but the chocolate and the drizzle and the marshmallows kind of made up for it.


The positives: they look amazing. The add-ons not only help in decoration, but also with the taste.

The negatives: the flavor that could have put it over the edge into an 'awesome' category was missing.

Cost: they're not as cheap as Suarez Bakery. They're $2.75 a piece. However, they're still cheaper than a lot of $3 cupcakes you find in Charlotte.