After A.J. Clemente's on-air gaffe, there's a lot of opinion floating around about whether or not he should have been fired.

When I was getting my degree in Mass Communication, I was taught that there are a couple of cardinal sins in journalism. One is saying that someone is dead when they really aren't.  That's a surefire way to lose your job, especially if the person you accidentally kill is Reverend Billy Graham.

The other major no-no is swearing while you're on the air. For that reason, when I was a reporter, I didn't swear inside the TV station at all.

Despite Clemente's firing, he's been getting his 15 minutes of fame, so it may work out for the best.

Clemente wasn't the first TV personality to swear during a live broadcast and I'm sure he won't be the last.

Whether it's magazines, newspapers or TV news broadcasts, mistakes happen. Some are more minor than others though.

Mistakes, big and small, are bound to happen when there's a lot of information being given out on a tight deadline. It's actually quite amazing that there aren't more mistakes since there's so much information that goes into just one story.

As long as they don't harm anyone, those mistakes are kind of fun to laugh at: 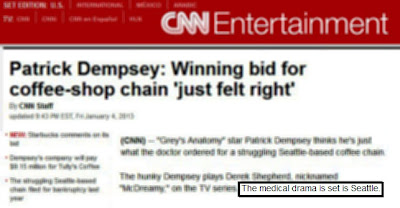 At the end of 2012, CNN posted a lengthy article about how Patrick Dempsey purchased a Seattle coffee chain that wasn't doing so well.

Very minor mistake in the article, using "is" instead of "in." It's a quick typo that has probably happened to everyone.

In the day and age of Internet trolls, however, it's usually the smallest mistakes that receive the most flack in the comments section of the articles. I guess people feel that mistakes, no matter how small, shouldn't happen. If only they were easier to avoid.


Here's another example of a word being left out of a sentence, causing a confusing sentence:

It's easy enough to figure out what happened, but not without re-reading it a couple of times over.

"Will be" would have fixed all their problems. 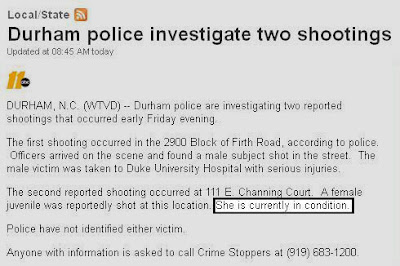 Here is another very minor mistake.

After a shooting happened in the Raleigh, NC area, news station WTVD posted the news story online. They almost made it through the entire article without error. Towards the end, however, they made the mistake: they left out the patient's condition.

Instead of listing what her condition was, they left it out entirely, making for a fun and useless sentence: "She is currently in condition."

Sometimes it's not a case of a word being left out that's the issue.  Instead, it's too many words that makes for a confusing sentence.

There was an example of this in the Rock Hill Herald a couple of months ago.  The story was about a man who exposed himself in a Wal-Mart parking lot.  The article was describing what happened prior to that incident.

This is what they ended up with: "Dorsey said he was dumped a cup of alcohol onto the ground before he went into the store." 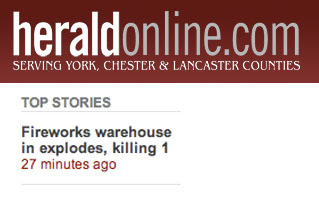 The headline to the right, also posted on the Herald website, wasn't missing any words. Instead, the words weren't put in the right order.

Even if they put the words in the correct order ("Fireworks in warehouse explodes, killing 1"), I'm not sure it would have been accurate.

Not to nitpick, but I think the proper headline should have read: "Fireworks in warehouse explode, killing 1."

It's been a while since I had a college journalism course and even longer since I had a high school grammar exercise, but I'm pretty sure since 'fireworks' is plural, 'explodes' shouldn't be. 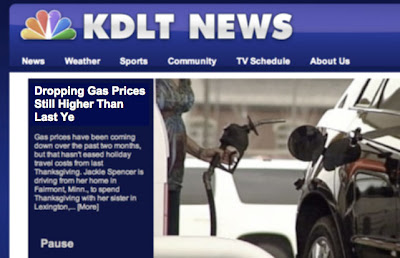 Lastly, here's one from KDLT, an NBC affiliate in South Dakota.

I don't know if it qualifies as a 'mistake.' After all, I think it's a case of the headline being too many words for the allotted space on the website.

It's not a major issue because, in this case, it's easy enough to figure out what the headline was supposed to read.