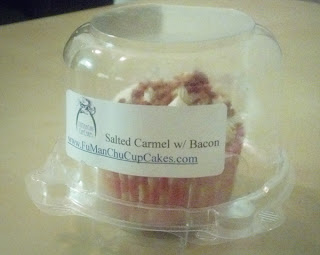 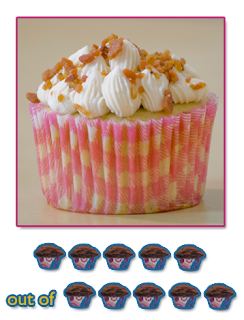 The poor little cupcake had a lot to live up to. It had been hyped up in my head because I'd had a few problems getting a hold of one.

I didn't eat it right away. I went home, made some supper, and then ate the cupcake.

Before I ate it, I warmed it up in the microwave for about 20 seconds.

That was probably 5 seconds too much because the several tiny swirls frosting on top had started to melt.

Nonetheless, I cut into the cupcake and the caramel gushed out. I quickly scooped up a bite.

It was incredible! The homemade caramel tasted delicious!

The salty, crispy bacon mixed with the sweet caramel and the butter cream frosting was a perfect combination.

As cupcakes go, it wasn't mammoth. It was a regular-sized cupcake, if not on the smaller side, so it didn't last too long. Five-to-ten bites and it was gone. I tried to savor the taste though.

I've had salted caramel with bacon cupcakes before, but this one was even more impressive. The cupcake tasted fine, but it was the pool of caramel inside the cupcake that stole the show. I haven't tasted homemade caramel that good since my Grandma's caramel rolls.


The positives: needless to say, this cupcake rocked my socks off on many levels. The tastes cooperated with each other and the caramel was an added bonus.

The negatives: the only negatives are that I only bought one cupcake and that it wasn't bigger.

Cost: $3 is somewhat expensive considering the cupcake wasn't as large as some others I've had, but the delicious ingredients did make up for it.