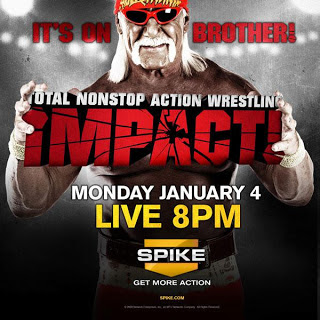 January 2010: TNA Impact went live against Monday Night Raw. RVD debuted. Hulk Hogan and Eric Bischoff were part of that show. Jeff Hardy returned to TNA. It was supposed to be a huge show in TNA’s history. They didn’t prove to be much of a threat to WWE’s ratings, but TNA did garner 3 million viewers for the opening hour of Impact. They dropped to 2.2 million by the end of the show, while Raw reached 5.6 million viewers.

It was clear: TNA wasn't ready to challenge WWE in a new version of the Monday Night Wars, despite many people hoping that was the case.

I think now may be the right time for TNA to take another chance.

Since 2010 TNA hasn't made a lot of progress with their ratings. The most recent edition of Impact got just a 1.07 -- that's the highest Impact rating sine April.

However, a general consensus amongst the Internet wrestling community is that TNA has made some good strides in improving their product.

Perhaps even more importantly, WWE is more stale than ever -- possibly at a lower point than they were in the mid-90s, when Hulk Hogan originally left the company and Bret Hart became the man to beat in the WWF.

Last week, WWE scored a 2.96 cable rating. That's still almost 2 million more viewers than Impact had, but keep in mind, this was a post-PPV show. Those shows usually have WWE fans tuning in to find out what happened.

A year later they did just as well, while Nitro was obviously losing viewers.

It's been a downward spiral ever since.

Raw has pretty much maintained a 3.0 rating for the last several years -- but that's half of the viewers they had in 1999! I know it's tough for any TV show to maintain interest and stay on top when it comes to ratings (take a look at one-time TV juggernaut American Idol this year), but to lose half your audience should be an indication that you're doing something wrong.

While the ratings haven't changed dramatically for WWE or TNA since January 2010, the perceptions sure have. 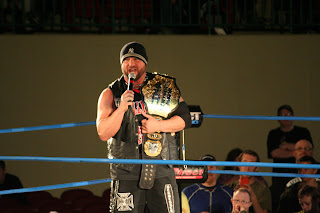 TNA made the step a lot of people were waiting for: taking Impact on the road, live one week and taped the next. Austin Aries and Bobby Roode both became TNA World Champions. Bully Ray has become an entertaining TNA Heavyweight Champion. Brooke Hogan being part of the storyline is even bearable.

The Knockouts, while pretty much entirely consisting of ex-WWE Divas, produce matches that are 10x the quality the WWE Divas produce. They at least pretend to care about their tag team division. TNA could stand to build up a new big star (Matt Morgan, maybe, or finally Samoa Joe?), but overall there seems to be a new bit of focus for the company.

WWE, on the other hand, is trying to maintain the perception that they are doing just as well as before. 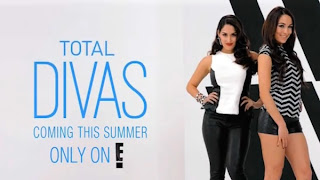 In some ways they are doing better. WWE added Superstars on WGN, Main Event on the Ion network, and Saturday Morning Slam on the CW Network. Meanwhile, Total Divas was just announced for a summer season on E!.

WWE programming hasn't been so readily available since 1999, when they had more than five shows on television each week.

WWE has truly become an entertainment juggernaut, which is part of the reason it’s such a horrible product these days.

They spend so much time with Make-A-Wish and Be A Star, making straight-to-DVD movies, providing 5-minute segments on YouTube and trying to emulate pop culture that the actual content of their shows is bland and the writing is inconsistent week-to-week.

Adding to that, they have failed to create new stars. 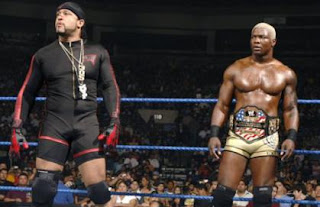 RVD, MVP, Carlito and Shelton Benjamin were all victims of this. They were held down because someone backstage didn't like them or didn't feel they were ready. The problem is: the fans were behind them.

Damien Sandow and Antonio Cesaro are going through the same thing now -- being pushed one week and being held back the next. At least they have made recent appearances on Raw though. JTG and Alex Riley are Superstars regulars.

Even Zack Ryder, who got over huge on his own, is being held back.

Instead of pushing someone who is fresh and capable, WWE is relying on part-timers like Brock Lesnar, The Undertaker, Triple H and The Rock in order to boost their PPV buys. Four or five part-time guys can't keep business going strong by making a few appearances each year.

So they rely on the workhorse. Cena may just be a real-life Superman, as he's always ready to return from injury ahead of schedule and he's granting Make-A-Wish wishes left and right. He's still incredibly stale though. His act is worn out. Fans are being vocal about this, both at live shows and in online communities. 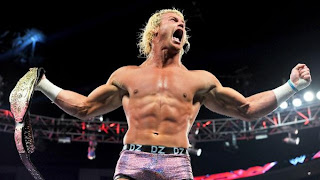 Even when WWE does give the ball to someone like Dolph Ziggler, they're not actually letting him run with it. He was given the World Title (a few years too late), but he was still being jobbed out.

TNA could potentially strike while the iron is hot here and go head-to-head against WWE. I doubt many people believe they'll actually be a threat to WWE, but if there's any time to try, it's when WWE is at a seemingly all-time low.

Even if it's just one live show, testing the waters again, it's worth a shot, especially if TNA takes this opportunity to build up some new stars. Spending millions of dollars on hiring someone like Goldberg won't do them any good. 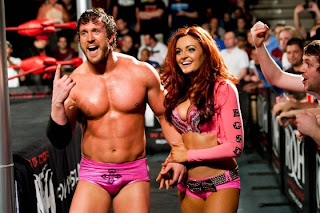 Hire a few people from the independent scene. Mike Bennett and Maria aren't the best workers, but they seem to be TV ready. TNA and Bennett could both benefit from a 2-year contract.

I'm not an advocate of a TNA roster that's full of former WWE superstars, but MVP and Shelton Benjamin added to the tag team division would do a world of good. John Morrison coming in as a singles star would be a great signing as well.

By giving some new talent a shot, along with some talent that was held back, TNA could do something WWE has severely neglected to do in recent years: give fans wrestling television they want to see.
Posted by Batson at 1:32 PM