Whenever I think of 2009’s Star Trek, I think about the scene where Captain Kirk’s parents are killed and he’s sent on a course to Earth – Superman style – in a small vessel. I was awestruck that such an emotionally powerful scene happened so quick into the movie. It was something I just didn’t see coming.

It’s because of the tone set by that very first scene that one doesn’t know what to expect when watching Star Trek: Into Darkness.

J.J. Abrams isn’t afraid to kill off a character – even those you aren’t expecting anything to happen to. He makes that clear with Star Trek: Into Darkness. That’s not to say that there’s a plethora of death in the new Star Trek movie, but it’s not one of those movies where you know that everybody is going to come out alive and well by the end of the 123 minutes.

I was wondering, at the beginning of each scene, if the majority of Captain Kirk’s Star fleet were going to get out of their predicaments alive. That takes your emotions on one heck of a roller coaster ride, which makes for one heck of a good movie.

I try not to give away too much of the main plot in these reviews – especially if it’s a movie that hasn’t been released on DVD yet (though I will say that the Enterprise takes quite a beating). Not being able to go into the detail of the movie makes this review tricky. Star Trek: Into Darkness is one of those movies that you want to dissect, piece by piece, with your friends as soon as the credits are finished rolling. It’s a movie that leaves you racking your brain, trying to remember all the cool elements, knowing that you’re sure to leave one out because there are too many to stay in the short-term memory bank.

That paragraph wasn’t even written by a hardcore Trekkie, so that should give you an idea as to how good the movie was. I saw one review that talked about how Star Trek: Into Darkness wasn’t exactly true to the Star Trek franchise. I didn’t read the article, but, maybe some Trekkies will have that same opinion. As a Star Wars fan, I was really impressed by what Abrams did with Into Darkness and I hope he brings the thorough storytelling to the new Star Wars series.

The story was very well written. There aren’t any plot holes that come to mind, fresh off seeing Into Darkness. I always enjoy movies that aren’t black and white – when there are characters with different motives that don’t always line up with the motives of other characters in the movie. That was definitely the case with this Star Trek sequel.

This movie explores Kirk’s issue with obeying rules, take another step in telling the story of Kirk and Spock’s friendship, progresses Uhura and Spock’s relationship, and furthers the characters of the other crew members as well.

What struck me is that it really was an ensemble movie, with each character getting a good piece of screen time. George Takei made it no secret that William Shatner went out of his way to make sure he was the center of attention in the original Star Trek TV show and movies. He would have probably enjoyed jumping forward into time and working on the set of the new Star Trek movies instead. Captain Kirk, Spock and Uhura are still the three main characters, but the lesser-known characters like Sulu, Bones and somewhat steal the show with their one-liners and comedic timing.

Abrams found a great supporting cast, helping to add levity in certain spots, but not at the expense of the movie. I love super hero movies, but a major pet peeve of mine is when the heroes of the movie stop to make chit-chat or have a romantic kiss in the middle of a fight-for-your-life situation. It’s like, ‘Yeah, yeah. You love each other. People are getting blasted up here though. Do that later!’

Into Darkness allows those conversations to take place, but they happen in real time. They get interrupted and the kiss doesn’t last for 10 seconds. It’s a quick peck and they are on their way.

All of the original cast members of 2009’s Star Trek return to the Enterprise for this one. There’s also a few new faces, like Dr. Carol Marcus (Alicia Eve). I thought I had her character pegged when she was first introduced, but was surprised by her role more than once. She and James Kirk seemed to have a little bit of chemistry. I guess she would qualify as his “love interest,” but Into Darkness isn’t a movie where you’ll see love scenes in candlelit bedrooms. They’re too busy saving the world, which brings up another positive about the movie.

The overall objective for the crew of the Enterprise is to stop the destruction of the Earth. It’s not the same all-too-standard ‘aliens invading Earth in the middle of New York City’ plot though. Most of the battles happen, appropriately enough, in space and on distant planets.

While we are comparing films, the main villain of this movie – John Harrison (Benedict Cumberbatch) – trumps Nero. Eric Bana did a good job in the role of Nero and I don’t have any real complaints about him, but I found Cumberbatch to be much more compelling. His story unfolded progressively throughout the movie.

Trekkies may know the background of that character, but I didn’t, so I was happily surprised at how much I disliked the guy by the end of the movie. 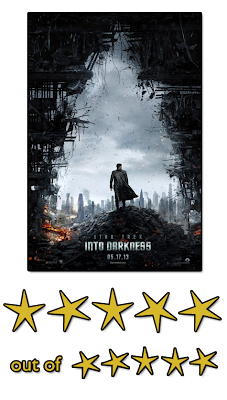 I don’t know if there will be a third movie in the series, especially with J.J. Abrams now in charge of Star Wars.

If there is a third movie, I don’t know if it will be as good as these first two were.

However, the door seems to be left open for more Star Trek movies, especially one featuring the Klingons, if nothing else.

Let’s hope something is worked out for another movie because the franchise is too good to call quits on now.