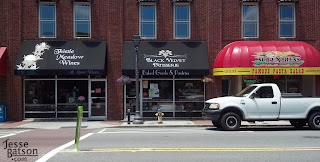 Straight out the gate: if you want to go to Black Velvet Patisserie, you’d better have your GPS or be a Mooresville native.

Black Velvet is actually right on Main Street, but I had a heck of a time getting to Main Street. Off the Interstate, around curves, and across railroad tracks to get there.

It was my first time in Mooresville. I did have my GPS, but somehow I still ended up parking about 3 blocks away from the bakery.

There are a couple of small cafe tables inside the shop. It seems like it would be a nice place to have a cupcake on a sunny afternoon.

The day I went there were about seven different cupcake flavors to choose from. I ended up picking out three of them. 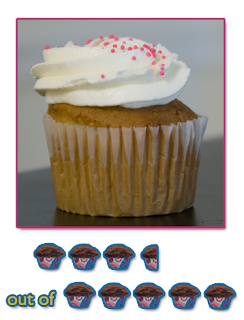 The strawberry cupcake has become a new favorite of mine, so that was an easy choice. The cupcake wasn't necessarily dry, but it wasn't moist. It was very compact. That actually ended up working well with the strawberry frosting, which was creamy, yet fluffy.

The frosting on some cupcakes is almost a cupcake in itself, thick and layered. That wasn't the case with the cupcakes at Black Velvet Patisserie. Given that the cupcake was already solid, I think a large portion of thick frosting would have been too much.

There wasn't a string of strawberry drizzle on top of this cupcake. A spoonful of syrup wasn't baked inside the cupcake either. I didn't notice any strawberry chunks, but the flavor was there. They must have blended it in because the taste was there. There was a little bit of strawberry flavor in the frosting as well. 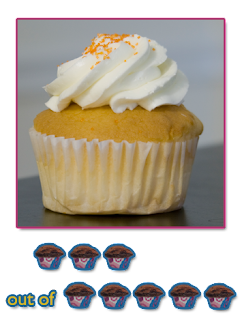 There was a very faint taste in the cupcake, but mostly it’s a vanilla cupcake disguised with some flavored frosting. The creamsicle cupcake was fluffier and more moist than the strawberry cupcake.

I didn't really get a 'creamsicle' flavor out of it. Whatever the flavor was, it didn't taste bad.

I don't know that I'd get it again though. Although the cupcake and frosting worked together to create a sweet taste, I guess I prefer a flavor that can be identified.

Creamsicle isn't one of those flavors -- at least not in the form of this cupcake. To be fair, I don't recall having an actual creamsicle before. Maybe this cupcake tasted exactly like a creamsicle!

Of course, even if it did taste like a creamsicle, that just means that the creamsicle flavor isn't too memorable. 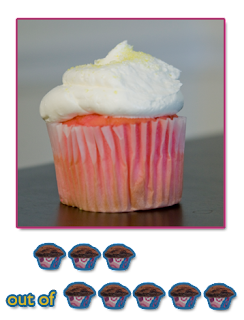 It did taste different than the strawberry – I guess that was the lemonade portion of the cupcake. However, it didn't have a very distinct taste to it. Kind of like the creamsicle cupcake, the pink lemonade taste was a little muddled.

The pink lemonade was a cupcake that tasted sweet with no filling inside, had creamy frosting on top, and a few sprinkles on top of that. It sounds like it should be a good cupcake. I guess it was. Overall, it was standard though, despite being a uniquely inspired flavor. You may see red velvet cupcakes at every bakery you walk into, but pink lemonade usually doesn't end up on the list of flavors offered. Maybe it's a flavor that just doesn't lend itself to cupcakes.

Just like the creamsicle cupcake, this one didn't leave a lasting impression on my taste buds.

I may have to give them another shot down the road though because the photos on their Facebook page look impressive.

The positives: I give them kudos for experimenting with their flavors.

The negatives: the Strawberry cupcake was a success. The creamsicle and pink lemonade require a little perfecting though.

Cost: These cupcakes were all in the $2.50 range, which seems reasonable since they weren't incredibly large or remarkably tasty.