In a way, the movie was really good. It introduced us to Superman, his allies and his foes. Yet, it kind of fell flat for me.

When it comes to super heroes, I make it no secret that Batman is my favorite. I never really became a big fan of the Superman character until I rented the Christopher Reeve movies about five years ago. After I saw those movies, I was very eager to see Superman Returns. After I saw that one, I wanted another, but that possible franchise fell apart.

When it was announced that Man of Steel was in the making, I was anxious to see what kind of magic Nolan would produce with Superman.

I don’t regret going to see the movie, but I wasn’t blown away either. That being said, the Batman trilogy didn’t really pick up until The Dark Knight. Even though Batman Begins wasn’t the best film of the three, it needed to be made in order to go on to bigger and better things.

I’m hoping that’s the same case with Man of Steel. Come to think of it, I’d probably rank Man of Steel higher than Batman Begins. It’s a bit like comparing apples and oranges because Superman and Batman are two very different characters with two very different settings, but if Man of Steel is already off to a better start than the Dark Knight trilogy, I’m hoping it will provide some amazing moments in any sequels that follow.

One thing that is quite obvious about Man of Steel is the mood of the movie. Nolan didn't use a lot of dark settings or colors in the movie. Even when the crew is in the Arctic, at night, it doesn't come across as a brooding place the way Gotham City did in the Batman movies. Metropolis and Kansas are depicted as bright, peaceful places to live.

Krytpon, as an alien world, is pretty much the same.

Even as war is taking place on Krypton, the backdrop is a sunset you'd expect to see at a beach.

The costuming for the Kryptonians is dark in color, as are their spaceships, but the landscape looks like something you might find on the outskirts of Denver, Colorado though.

Man of Steel stays mostly true to the origin story most fans are familiar with.

When Krypton becomes a planet that's about to blow, stripped of it's natural resources, General Zod and his army decide to take matters into their own hands because they feel their leaders have failed them.

Kal-El’s parents are faced with only one option: sending him to Earth.

Jor-El (Russell Crowe) and Lara Lor-Van (Ayelet Zurer) sent their child off in a tiny spaceship. Between Smallville and the various other Superman movies, we've all seen Superman's upbringing in Kansas. Nolan skips that portion of Superman's story, but, through flashbacks, does show us how he discovered and coped with his powers.

We are also shown that Jonathan Kent (Kevin Costner) and Martha Kent (Diane Lane) are large parts of Clark Kent's Earth life. They are, after all, the only friends or family he has.

The casting was well done for the most part. Russell Crowe as Jor-El worked out great, but Kevin Costner played the better of the two fathers as Jonathan Kent. The role of a Kansas farmer isn't much of a stretch for him, given that he's played an Iowa corn-farmer in Field of Dreams. Diane Lane came across as a loving mother -- just as you'd imagine Martha Kent to be.

Even the actor who played young Clark Kent (Dylan Sprayberry) was convincing. He actually looked very similar to the grown up Clark (Henry Cavill). If one didn't know better, that could have been the same person -- aged by a decade or so.

Costner and Sprayberry had a father-son chemistry on the screen, just as Lane and Cavill convincingly played a mother and son.

Cavill was a nice casting choice for Superman. He didn't deliver a breakout performance, but I'm hoping he'll grow into his role by the time the next movie is released. Personally, I don't think Cavill was any better a Superman Brandon Routh was. Cavill had a seriousness to his acting, though, which worked with the movie.

As is the case with most aliens invade Earth movies, the U.S. government gets involved in matters.

That created the role of Col. Hardy, played by Christopher Meloni. Yep, the Law & Order: SVU detective is now part of the Superman franchise.

Once I got over the fact that the guy from SVU was in the Superman movie, I grew to like the character. The character provided more than one comedic moment.

Speaking of comedic, there's Amy Adams. She's gorgeous and she was very likable in Enchanted and Julie & Julia. I was surprised to see her as Lois Lane in the trailers I saw though. Lois is usually more assertive than Adams comes off in some of her previous roles.

The Lois Lane in the Christopher Nolan universe is sweet, armed with a couple of witty one-liners. She's not the typical Lois Lane. I'm not sure how I feel about that. It takes a few scenes to adjust to it, but eventually you do and then it becomes a welcome change.

It's kind of refreshing to see a character tweaked in order to tell a new story. That being said, I'm usually not a fan of changing characters from their original stories. There is a reason people liked the original stories in the first place.

Adams works as a newer version of Lois Lane though.

The one casting decision that I believe was a mistake was Laurence Fishburne as Perry White. He was lackluster, to say the least. He didn't even do a fraction of the job Lane Smith did in Lois and Clark: the New Adventures of Superman. Fishburne was overshadowed in every scene he had in the movie -- and there weren't many of them.

There is no connection to the character at all. He wasn't likable. He wasn't a Jonah Jameson-like character, only interested in selling newspapers. He didn't come off as a fair-minded boss. He was there -- on the screen. His lines served a purpose. The character served a small purpose in the movie. Fishburne didn't do the role justice.

On the opposite end of the spectrum, Michael Shannon as General Zod was gold! Zod had is convictions and he was going to destroy anyone who stood in the way of them. Shannon captured that perfectly. He was your classic villain, without falling into the trap of being generic.

His gorgeous cohort, Faora (Antjre Traue) was very entertaining as well. Her scenes with Col. Hardy were especially fun.

General Zod and Faora are pretty much updated characters of the versions used in the 1978 Superman.

The crew certainly gives Superman a beating too! I thought Iron Man got beat up pretty bad in Iron Man 3, but that was nothing compared to Superman's battles in Man of Steel. That stands to reason, as Superman has out-of-the-world strength, so he can get beat up like Gumby and come back for more. 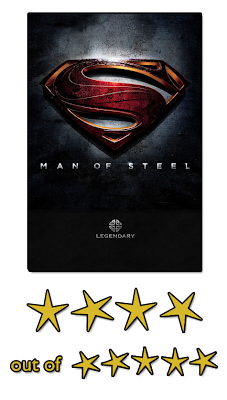 There wasn't a part of the movie that looked particularly fake in terms of special effects. Then again, 1978's Superman was probably pretty spectacular to watch at the time. There wasn't an abundance of explosions and outrageous special effects put to use in Man of Steel.  Superman did dash into the sky in an instant, but they didn't use a lot of close-up filming, so there weren't obvious signs of a green screen being used. Any close ups that were used didn't last too long.

Faced with the tough task of creating an impressive Superman movie, possibly launching a new trilogy (after the enormously successful Dark Knight trilogy), Nolan did a good job. Like I said at the beginning of this review, I think the best is yet to come with these Superman movies. That is, after all, the way a trilogy ought to work, isn't it?