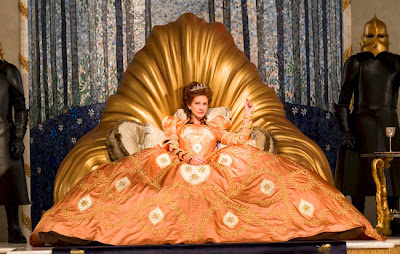 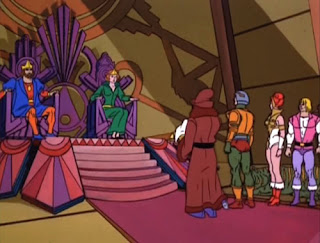 The color combination is kind of odd actually. A set of purple chairs on top of a pink (is that coral?) stage, with tan walls. Sounds like it'd qualify for an episode of Trading Spaces, but somehow it works out.

When I was a kid I always wanted to be transported to Eternia, just to pay the palace a visit. It looks like a nice, safe place to hang out for a couple of hours.

The only problem is that it seems like a relatively boring room. There are no decorations on the walls. No life-size chess board. No statues.

With a court jester, I guess you don't need much else.

Another throne room from the He-Man series that was pretty cool to look at was The Sorceress' throne inside Castle Greyskull. 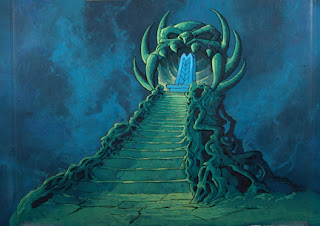 Just like the outside of the castle, the inside consists of the same kind of stone that the outside is made of.

There's an almost ethereal feel to this one, with the base of the throne almost growing out of the ground like the roots of a tree.

The skull, at the top, with the spikes circling around it, is probably my favorite part about it.

The problem with this one is that it's quite a hike to the top of the throne. Then again, you'd get some killer legs going up and down that thing.

I'm not sure about the stone chair though. I think I'd swap that out with a Laz-E-Boy.

It seems almost everyone in the He-Man universe had throne rooms.

Not to be left out, She-Ra's arch-rival, Hordak, had his own throne room. It was mighty impressive in it's own right. 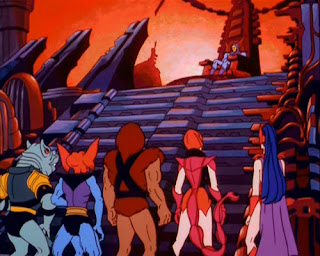 Take a look at that thing!

Not only are there several stairs to scale, but the back of the chair is about as high as the throne itself.

Hordak evidently wasn't a humble guy. I can see why all his minions had loyalty to him. Looking up at someone on that throne would give an automatic feeling of intimidation.

The color scheme is pretty cool, with the dark purples and the auburn-ish color.

It's not the color of the size that is the best part about Hordak's throne though. It's what it can do. Hordak had several buttons on his armrest. Each button controlled something different. The one he relied on the most was a trap door that was triggered where his henchmen usually stood.

If one of them came back with a bad report, he'd send them down to the waste-filled river below the throne room. That's definitely an incentive to make your employees work harder. 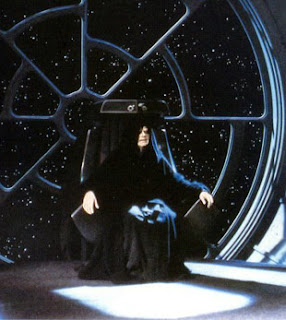 Up next: the Sith Lord's throne room on Star Wars. Considering it's Star Wars and George Lucas had an entire team of set designers working for him, the throne really isn't that impressive.

It's pretty simple. In fact, it's pretty much just a chair. Granted, it looks like a very comfortable, leather chair, but there's not a lot of prestige, magnitude or intimidation that comes with that throne.

The best thing about The Emporer's throne is the backdrop. How cool would it be to have the vastness of space just outside your window?

Instead, I'd turn it around and look at the various planets, stars and solar systems ahead.

Maybe his chair has a swivel? That way it's the best of both worlds.

The next throne definitely doesn't have a swivel. It's not stationary at all. 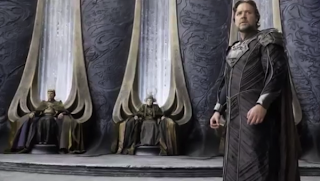 In Man of Steel, the thrones the elders were sitting on were impressive. They weren’t exactly adjustable though.

It looks like the very high backs (a theme I’m starting to notice…) are built into the wall. They lady elders aren’t going to be rearranging the throne room every other month, that’s for sure.

A major remodel would definitely be required to move the thrones.

The gold coloring and the throne that’s made of what looks to be marble gives off a very regal feeling. 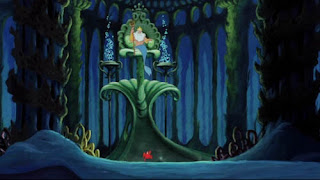 King Triton’s underwater throne in Atlantis looks like it’s fit for a king because of all the ornamental designs around it.

The seashell-like base, peacock-like seat, and pots on each side of the throne look like something you might expect to see from a previous century.

Like some of the other thrones on this list, Triton’s throne looks down upon his subjects. It doesn’t look nearly as intimidating as Hordak’s throne though. 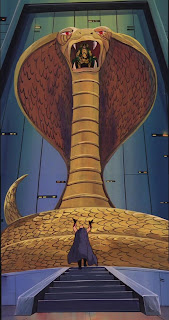 This may just be my favorite throne on the list because it is so extreme. Serpentor’s throne from G.I. Joe takes impressive thrones to a whole new level.

Talk about egotistical! The throne is huge! It’s not just ridiculously large, it’s obscenely large. This throne is something Napoleon would be proud of.

Cobra had several bases. Each one usually got destroyed by the end of the episode, so I’m not sure how long this gigantic Cobra-shaped, gold-plated throne actually lasted.

Personally, I’d be afraid of falling out of it. Either that or I’d hit my head on one of the fangs.

My other favorite, also covered in gold, is in Thor. As if there’s not enough gold on the throne, there’s a reflective gold surface behind the throne too. 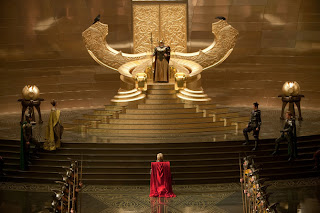 King Odin’s throne was pretty much amazing. It reminds me of the base of a sword.

I don’t even know what those black things on the side of the throne are. Crows?

Anyway, the design is neat. There are several sets of stairs leading up to this throne.

There’s the first set and then another, followed by the steps that only Odin continues on with, at the center of the throne.

Make sure to keep that in mind if ever you end up in the position of having to build yourself a throne -- you know, in case you're the Supreme Ruler of the Universe or something.


Related Content:
• 7 Super Heroes Who Deserve Their Own Movie
• Some 'Should Be' Sequels
• Actors Who Have Pulled Double Duty
• The top 10 coolest looking villains