I went with a lemon cupake and a vanilla/chocolate cupcake. I was going to stop there, even though the cupcakes didn’t cost much, but I was told there was a $5 credit limit.

So, I got another cupcake and a slice of cake. For five dollars, you can get quite a few cupcakes at Berry’s Bakery. 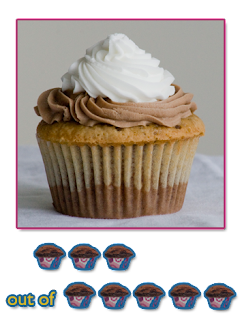 I was anxious to try this one because I liked the vanilla/chocolate concept with the white/chocolate frosting.

I didn’t eat it at the store. I took it home and ate it a couple of hours later. By the time I got home, though, the frosting was hard. I’m not sure how fresh the cupcake was, but the frosting was still crusty, even after being in the microwave for about 20 seconds.

The cupcake wasn’t too bad though. It almost tasted like cookie dough. The frosting didn’t go very well with the cupcake. One flavor of frosting probably would have worked better.

The four flavors combined together left my tongue a little confused and my stomach a little upset.

I think it was the sweetness of the vanilla frosting that didn’t sit well with me. 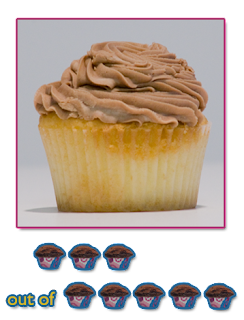 Although this cupcake was just vanilla (no chocolate-vanilla mixture here), I liked the frosting on this cupcake better.

There was no chocolate-vanilla combo taste with the frosting, so that stopped any awkward flavor combinations like there was with the first one. The chocolate frosting actually had a somewhat atypical taste to it.

There was almost a very sweet caramel-chocolate flavor in it.

The cupcake wasn’t terribly soft, but it wasn’t hard. It's not a bad cupcake. Although it's not amazing, it does stand apart from a lot of the other cupcakes I've eaten, for the frosting's taste alone. 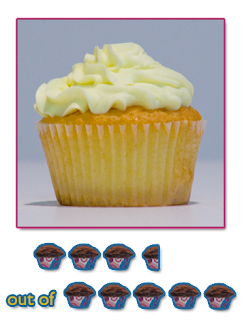 The lemon cupcake was the best of the three.

It tasted a lot like the lemon-poppyseed muffins I ate as a kid – except without the poppyseed and in cupcake form.

The frosting had a great lemon flavor to it as well, despite being just a smidgen too sweet. Overall, it was good though. It was my favorite of the bunch.

The positives: the mix of the frosting was a different change. It was nice to see someone try that.

The negatives: mixing the frosting was a nice idea, but, in reality, didn't turn out the best.