I’d been meaning to post this review a while ago. I saw The Wolverine two and half weeks ago already, but didn’t get around to writing this review. I guess that may be an indication as to whether the movie was good or not, huh?

It wasn’t bad actually. It didn’t live up to my expectations though.

Considering it was filmed and set in Japan, there wasn’t an epic sword-fight at any point in the movie. There were some impressive battles between characters with martial arts training, but nothing that really stood out as ‘Holy crap! Did you just see that?!’

The CGI left a lot to be desired as well.

I don’t want to spoil the movie for anyone who still has high hopes and hasn’t seen it yet, but there’s a scene with a bear that left me shaking my head. Couldn’t they have gotten a real bear, at least for part of the scene?

I realize that grizzly bears probably aren’t as easy to train as cats or dogs, but surely there’s got to be one out there that was tame enough to be used for the movie.

There’s a scene near the end of the movie – in a small Japanese village at the foot of a mountain fortress – that could have been really powerful, but the unbelievable CGI helped make the scene standard instead of amazing.

The other problem with that scene, in particular, was that there was no emotional music. The score to a movie can make a movie – and certain scenes – epic. Without that music, the emotion isn’t there.

Hugh Jackman brought his best to that scene, but in a movie that relies on impossible feats, the computer animation needs to make those impossible feats look realistic. The music factors in too.

With 2/3 of those elements missing, you’re left with a scene that isn’t anywhere near as impactful as it should’ve been.

That seemed to be the problem throughout the entire movie.

They (understandably) made Wolverine the center of the movie. Jackman, as great as he is in the role, can’t hold down an entire movie by himself. He needs a little help in a good supporting cast.

All of the actors did a decent enough job, but quality material in the script was clearly lacking.

I wasn't expecting the cameo from a previous X-Men member in the movie, but there was one.

There were a few new characters, like I’d been hoping, but unfortunately the creators of this movie didn’t let any of them stand out.

Yukio (Rila Fukushima) ended up being an entertaining character, but she was somewhat subdued throughout the movie so her comedic moments generated a chuckle, but never full-out laughter.

Her action scenes worked, but I don't know that she's the most convincing fighter due to her petite size.

Mariko Yashida (Tao Okamoto) didn’t have any mutant powers, but she was an alright character. She served her purpose as the Wolv's new love interest. I think she probably had too much of a role in The Wolverine considering she wasn't the most interesting character.

If I were in charge I would have downgraded her role and given that time to some of the other mutants.

Kenuichio Harada (otherwise known as the archer) looked like he could be an interesting character at the start of the movie. After a couple of plot twists that character became fairly one-dimensional.

Viper (Svetlana Khodchenkova) made an appearance in the movie as the main villain (kind of), but she seemed more like a cheap version of Poison Ivy than her own character – and Uma Thurman played that character better.

I’m not entirely convinced it was Khodchenkova’s fault that Viper fell flat. There didn’t seem to be enough meat in her character to really do much with. She was a standard villain in a B-movie – complete with an unnecessary and random outfit change.

I couldn't help but also be disappointed with the Silver Samurai. Considering how cool the design looked in the promotional photos, the way the suit/character was utilized in the movie wasn't as effective as I thought it could have been.

For as many negatives as this movie had, there were some positives.

I did enjoy that The Wolverine had a different feel from the other X-Men movies. You won’t be confusing this movie with X-Men Origins: Wolverine or any of the movies from the original X-Men trilogy.

The film work was incredible at times. Japan provided a lot of visual scenery for the movie and the cinematography captured it nicely.

The Wolverine did have some fun fight scenes too. Even though the final battle at the end of the movie wasn’t what I was hoping for, there was an innovative scene in an operating-room setting. Wolverine got involved part-way through that one.

Another was the battle on top of a bullet train. I always appreciate an innovative scene like that.

It wasn’t at all like the top-of-the-train fight scene in Skyfall. Even though I haven’t seen The Lone Ranger yet, I think it’s safe to say the train fight scenes in that movie aren’t comparable either.

That’s the beauty of the X-Men universe. There are some things that can only be done with the vast array of mutant characters Marvel has created. 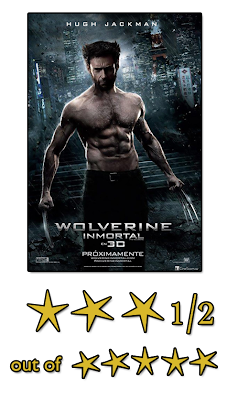 If they could’ve have established this new set of characters a little better, The Wolverine may have been a really good movie. Instead, it’ll probably be a time filler for FX on a Saturday afternoon in a few years.

The absolute best part of the movie was the scene after the initial credits. Maybe I should have seen that coming, but I didn't. My jaw dropped. I leaned forward in my seat. The scene definitely makes me more interested in seeing the next X-Men movie.


Related Content:
• 6 Things to Expect from The Wolverine
• 7 Super Heroes Who Deserve Their Own Movie
• Man of Steel – reviewed.