First things first though. Don't judge the cupcakes by their somewhat sloppy appearance!

They looked much nicer before spending three hours sitting in my car on a 90 degree day. For what they went through, they held up pretty well actually. 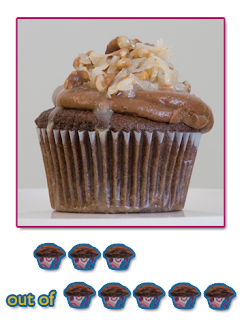 This was a delicious chocolate cupcake with equally delicious frosting!

I don’t normally like coconut or nuts on my cupcakes, but I ventured out of my cupcake comfort zone and ate it anyway.

It was a very good cupcake. The great frosting and chocolate flavor of the cupcake made up for the unnecessary toppings.

The coconut didn't taste bad, but I'm just not a fan.

I don't think I ever will be.

I left a good portion of the coconut on my plate and then ate the rest of the cupcake. 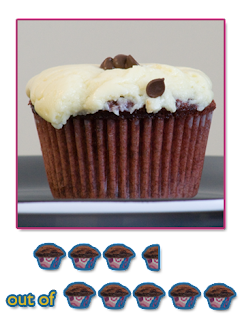 The cream cheese frosting was amazing! It reminded me of the kind my mom used to make.

The frosting started off with a strong cream cheese flavor, but ended on a sweet note with a sugary taste.

The cupcake was moist and the melted frosting actually added nicely to it.

There are good red velvet cupcakes and bad ones. The good ones combine the red velvet cake flavor with a great cream cheese taste. This cupcake was a good one.

The chocolate chips on the top were nice touch that added a nice, chocolatey flavor to the mix. 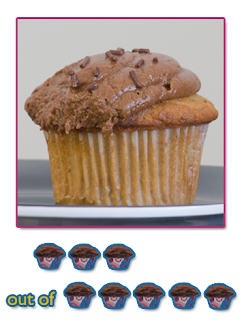 Combining a few of Elvis' favorite flavors, 'The Elvis' is a banana-flavored cupcake with chocolate inside and a banana chip on top.

Just like the German Chocolate Cupcake, The Elvis had a very rich chocolate taste, thanks to the chocolate filling.

At first I didn’t like the banana flavor. It was almost too much. I’m kind of picky when it comes to bananas. I like the actual fruit. I like most versions of banana bread. Cupcakes and muffins, however, is usually where I draw the line.

After the chocolate frosting and the peanut butter center came into play, however, the cupcake got better.

I kind of want to go get a few banana chips


The positives: all three cupcakes were flavorful, but the cream cheese frosting on the Red Velvet Cupcake won me over

The negatives: some cupcakes just don't need extra toppings. The German Chocolate Cupcake was definitely one of them.

The cost: these cupcakes were all under $3