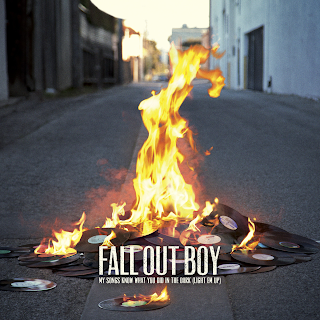 Their second single is another awesome song.

"I don't know where you're going
But do you got room for one more troubled soul?"

No troubled souls after listening to this song. It's a foot-stomper, hand-clapper, feel good time.


Where Did The Party Go

It’s one high-energy song after another. Surprisingly, they don’t sound the same. Each one falls into the ‘rock’ category, but has certain elements that make them separate from the others. This song has a bit of funk to it.

Ke$ha, Pink and Train have all come up with some interesting lyrics, but Fall Out Boy may take the cake.

Once again on this song, you get the kind of lyrics that only Fall Out Boy can deliver:

"This is the story of how they met
Her picture was on the back of a pack of cigarettes
When she touched him he turned ruby red...

When you're not busy chuckling at the lyrics, you'll probably be singing along to this song.

It’s a slower (just a bit) track from Fall Out Boy and Foxes. They still deliver the chorus with a great deal of oomph though.

The vocals on the chorus are really great, showcasing a great deal of range. Foxes contribution was a perfect match for this song too. All the vocals harmonize like they’ve been singing together for years. The result is an awesome song -- notice a trend there? 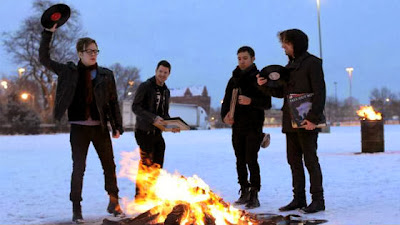 You want gritty? Then check this song out. Patrick Stump delivers once again.

These days there are rappers on just about every song. There have been some good rock/rap collaborations over the years. This one works too. Big Sean does an okay job on the track. To me he usually sounds monotone. It’s the same case here.

However, his addition doesn’t hurt the track. His monotone voice kind of works with the music in an odd way. Plus, having him guest on this song adds a little variety to the album.

Fall Out Boy are definitely the most impressive part of “The Mighty Fall” though.

This is one of the weaker songs on the album. It only has three plays on my iTunes. That being said, it’s still at least a 3/5 star song.

This break-up song is catchy enough that, when the chorus kicks in, I find myself nodding along and even singing some of the words. Not bad for just four plays on iTunes.

FOB recovers from two not-as-impressive songs with a some impressive falsetto action and over modulated vocals. Songs that cover or mention death is something very common for Fall Out Boy. The theme is mentioned again here:

Considering death is typically a dark topic, Fall Out Boy makes it energetic and lively. 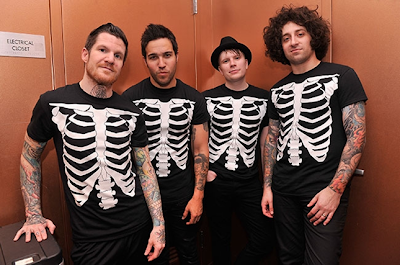 This is probably the most light and whimsical song on the track, but it’s still very FOB.

They tend to make most songs work on the album, whether the songs have a harder edge or not.

At 3:24 it's one of the shorter songs on Save Rock and Roll, so my advice is: enjoy the song and then put it on repeat..

An echoing group of singers join in for the main chorus: “We are wild/we are like young volcanoes.”

The lyrics crack me up once again.

"Come on
Make it easy, say I never mattered
Run it up the flagpole
We will teach you how to make boys next door
Out of assholes"

In my review of Warrior, I mentioned how the team of Ke$ha and Iggy Pop on “Dirty Love” was very fitting. Well this combination may be just as natural as Ke$ha and Iggy.

It’s not one I would have thought up, but once I saw Courtney Love’s name, I thought ‘That makes sense.’

The two acts make for an interesting, if not dynamic, team. They don’t waste any time letting everyone know Courtney is on this song.

The rest of the song is just as fun. 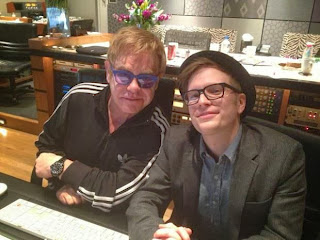 When it comes to collaborations, Fall Out Boy doesn’t go the typical route. Hence Elton John’s inclusion on “Save Rock and Roll.”

I haven’t listened to his latest album, which was released in September, but if there are any songs similar to “Save Rock and Roll” on his own album, I wouldn’t mind owning it. 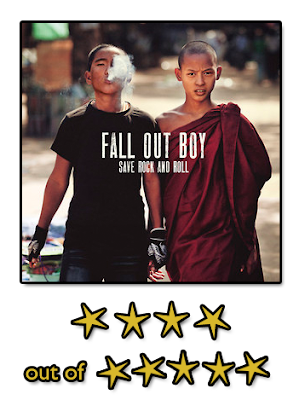 I don’t know if Fall Out Boy is going to take another extended break after Save Rock and Roll, but if they do, at least they left us with 11 awesome songs to keep us satisfied.

While other artists have filler songs on their albums or maybe a song or two that they don’t seem too passionate about, Fall Out Boy brings it every single time. Every song is polished, has a catchy hook, a variety of instrumentals and good vocals.

They may not be branching out like Daughtry and going folk or country or borrowing from the Euro trend that’s going on in pop music right now, but that’s just fine by me. Fall Out Boy does rock and they do it well. For that reason, the title of the album is appropriate. They didn’t stray from the rock and roll sound that made them famous.

In some ways I think it’s harder for an artist to stick with their original sound and deliver new songs. Fall Out Boy does it here though. They seem to do it so effortlessly too.

When it comes time to talk about the best albums of 2013, this one should be on everyone’s list. It’s a home run, through and through.