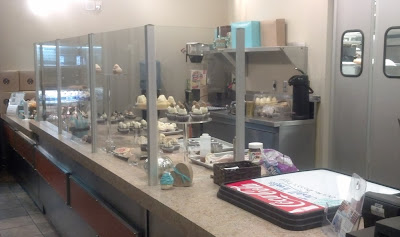 I reviewed Jewell Treats way back in April, but this summer they moved to a new location at Hearst Tower in Uptown.

I stopped by to check out their new digs.

The new location on the second floor of the Hearst building is handy if you’re in Uptown and need a cupcake fix.

Outside of the regular flavors they feature, they experiment regularly.

In fact, one of their customers recently won a ‘you pick the flavor’ contest. She chose a chocolate cupcake with whipped cream in the middle, a Nutella/vanilla frosting and some caramel drizzle on top of that.

I’m pretty sure that could take care of anyone’s daily sugar fix. 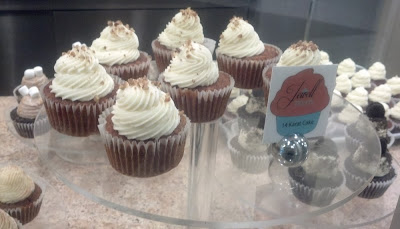 I got that cupcake and it was incredible! The Nutella flavor was definitely noticeable, but not overpowering.

The whipped cream in the middle made a good chocolate cupcake that much better.

The caramel drizzle was proverbial ‘cherry on top.’

Since it’s Fall, pumpkin spice is all the rage. Jewell Treats offers their version in cupcake form. I tried that one too.

Let me go on record as saying: “Their pumpkin cupcake is amazing!”

Fall is one of my favorite seasons simply because of all the pumpkin-flavored treats. Go get it while you can!

To learn more about Jewell Treats, check out their Facebook page
Posted by Batson at 6:17 PM