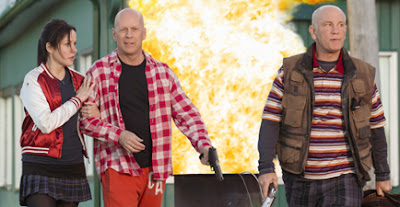 Just like that the action-packed movie takes off, journeying to various places in Europe. It all seemed fresh – maybe because Sarah Ross (Mary-Louise Parker) was along for the ride too, adding a fresh element to the movie.

While Morgan Freeman isn't in Red 2, there are some new faces in the cast to make up for it.

Catherine Zeta-Jones makes an appearance in this movie as the lovely, seductive and dangerous Miranda Wood. Anthony Hopkins plays a scientist named Bailey. Lee Byung-hun (Storm Shadow from the G.I. Joe movies) is even in it. 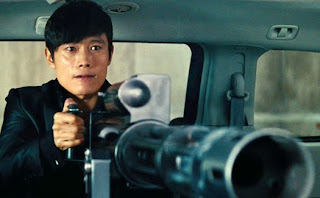 Lee Byung-hun adds automatic 'action movie' credibility to any movie he's in. One of the best action scenes of the movie involved Lee Byung-hun and a gigantic machine gun that was positioned in the back of a van.

Another great scene involved Lee Byung-hun, a pair of handcuffs and a freezer door inside a gas station. Go ahead and try and imagine that. I don't know who came up with the action sequences, but whoever it was did a great job.

Something else that impressed me about this movie is that all the actors are over 40. Even Lee Byung-hun is 43 years old.

There aren't too many action movies that feature a bunch of elderly folks involved in motorcycle chases, hand-to-hand combat and breaking into highly-sensitive government offices. Red 2 does that, though, and manages to be extremely entertaining. 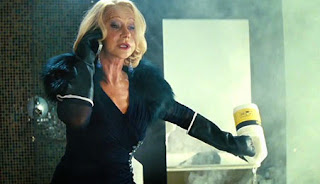 Speaking of entertaining, I forgot to mention Helen Mirren.

She is back again as Victoria, the straight-to-the-point, sharpshooting assassin from the United Kingdom. Whether she's easily fighting off men half her age, using her smarts to outwit almost everyone else in the movie or flirting with the returning Ivan (Brian Cox), Victoria is a character that always adds to whatever scene she's in.

Who knew that a role as a cheeky assassin would work so well for the 68-year-old Mirren?

I won't totally spoil the movie, but it's not clear whether she's an ally or a foe. The situation is different in Red 2. She's not just another 'one of the troops' available to help Moses and Boggs get out of their pickle. 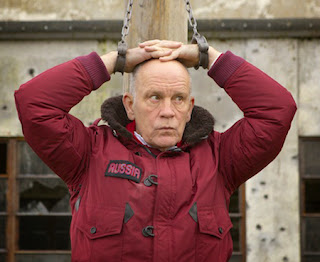 Lets talk about Boggs. If we're talking comedy, there's nobody in Red 2 funnier than John Malkovich. He is make-your-sides-hurt hilarious as Marvin Boggs.

His chemistry with Willis is great, but Malkovich steals the show with or without Willis.

He made the entire movie theatre audience laugh out loud several times by just making a simple facial expression.

The writers gave Boggs some great lines, no doubt. Malkovich delivers them to perfection throughout the entire movie.

Thankfully there's a lot more of Malkovich in Red 2 than there was in the first movie. 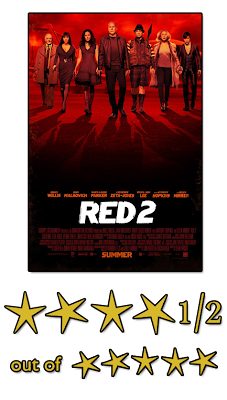 If you liked Red and haven't seen Red 2, go get it on DVD. Don't even waste time waiting for it to come out on Redbox because you'll end up buying it anyway.

There are a couple of moments that aren't entirely believable, but considering it's an action movie, it does a pretty good job of staying within the realms of real life.

I don't know if any other movie this year -- besides maybe Thor: the Dark World and Star Trek: Into Darkness -- that blended action, comedy, suspense, and drama so well. It's movies like Red 2 that are forming their own genre: action dramedy.

I haven't been keeping up on my Internet movie gossip, but I sure hope there are some people in Hollywood talking about Red 3 right now.