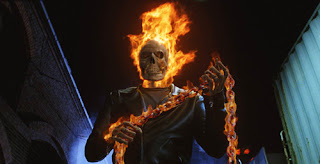 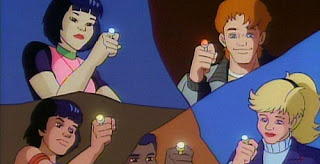 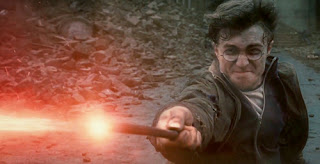 Theoretically, this weapon should have been higher on the list.

After all, a wand that can cast spells of protection or offense would be a decisive factor in a fight.

The problem I’ve always had with Harry Potter’s wand is that it looks very unimpressive. I’d rather have a magic triton or snake staff than a wimpy looking wand like Harry Potter and his fellow wizards use.

The laser-beam-like substances that shoot out of it look cool, but pointing your ruler-sized wand and making an angry face just doesn’t have the same imposing visual as the weapons further up on this list. 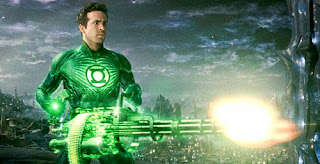 This weapon is another that should be higher on the list…in theory. A ring that will change into anything your mind can come up with? Sounds like a slam dunk right there.

I think that was the problem though. The coolest weapons have some limitations.

When I was a kid, my friends and I would negotiate which mutant abilities we could have whenever we’d play X-Men. The goal was always to come up with the best powers possible, but it wasn’t any fun to play if someone couldn’t be defeated.

That’s how I view Green Lantern’s ring. It’s certainly more powerful than a Battarang or a laser beam shooting gun, but it’s almost too powerful for it’s own good. 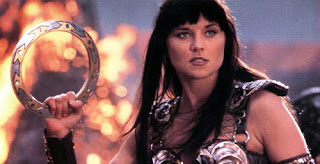 Xena doesn’t have the super strength that Hercules does, but she has a sword and, perhaps more importantly, a Frisbee-looking thing that has razor-sharp edges on it.

Full disclosure here: I had to Wikipedia what this was called. Up until then, I was calling it “Xena’s Frisbee weapon thing.” Lucy Lawless calls it her "round killing thing." That works too.

The chakram, according to Wikipedia, is a throwing weapon that originated in India. It’s circular with a sharpened outer edge and ranges in size from 4.7 to 12 inches in diameter.

It’s designed to be thrown, but could be used up close as well. Because of it’s aerodynamic circular shape it’s not easily deflected by the wind.

Xena typically threw it like a boomerang or Frisbee too. She’d throw her chakram without worry that an enemy would gain access to it because it would usually circle back around and she’d catch it.

The Xena creators may have taken some creative license with that aspect of the weapon, but if it did work that way, it’d be even cooler. 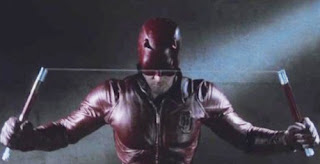 If you’re a half-blind superhero, you’ve got to have some tricks up your sleeve to make up for your limitations. A pimped out billy club is just the weapon you'd need.

It's actually two clubs held together by a cable that extends, so it can be used in a variety of ways.

Daredevil can use the weapon as two billy clubs, as one long staff, as a grappling hook or a variety of other ways. Of all the weapons on the list, this may be the most versatile -- excluding The Green Lantern's ring I suppose. 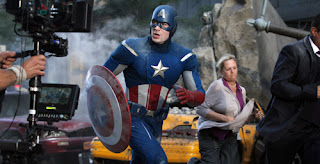 Compared to a lot of the other weapons on this list, Captain America’s shield may seem limited. After all, it doesn’t shoot fire, transform into a machine gun or cast magic spells.

It does deflect bullets, laser beams or pretty much any other dangerous object that’s hurdled its way.

Made of bulletproof alloy, Captain America’s shield is almost indestructible. In The Avengers, when Cap’ was battling Thor, his shield withstood a few swings of Thor’s hammer. That proves that his shield must be pretty durable!

Captain America uses the shield as an offensive weapon too. Just like Xena, Captain America will send his shield soaring through the air like a boomerang, usually taking out a couple of enemies in the process. 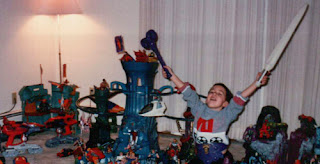 As you can see by this photo, I’m a major Masters of the Universe fan, so He-Man’s sword was bound to make my list. When I was a kid, I wanted a sword just like He-Man’s. Truth be told, it’d still be pretty cool to have a sword like that.

I had a few swords growing up, including one that would glow in the dark.

None were quite like the one He-Man had, but imagination made up for that. 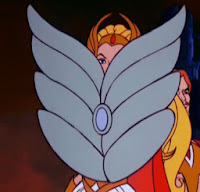 Sometimes it seemed that He-Man got the short end of the stick. He-Man’s sister, She-Ra, could transform her sword into a variety of things including rope, a shield, and a white-hot torch.

She could also communicate with The Sorceress through the stone that was in her sword.

He-Man couldn’t do any of that, but he didn’t need any of those powers because he had Man-At-Arms always making up special gadgets or weapons to test out.

He-Man did use his sword in a variety of ways though. 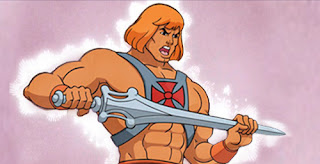 He deflected magic spells and laser beam shots, he created whirlwinds with it, and he used it to separate the ground by using it as a lever.

Of course he also used it to chop through just about anything.

Let's not forget that the sword gave the normal Prince Adam some super-human strength.

When you factor that in, the sword doesn't need to have a bunch of extra elements. 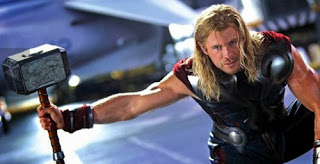 An all-powerful hammer that will come back on command? Yeah, that’ll earn a spot on the list.

Much like Captain America and Xena, Thor throws his weapon at his foes.

Unlike Xena and Captain America, Thor never has to worry about losing his hammer (unless Oden banishes him again) because all he has to do is hold out his arm, open his hand and the hammer comes barreling back to him.

On top of that, only the worthy can lift his hammer, which rules out any possibility of bad guys getting a hold of it. That’s a better safety feature than automatic locks or car alarms. 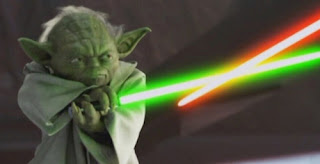 Come on now. Was there really any other choice?

I don’t think anything will ever top the lightsaber. It’s a winning concept. It’s a compacting sword that chops off people’s body parts with a single swipe. Visually it looks awesome and it makes an uber cool sound whenever it’s used.

That sound is as classic as Darth Vader’s voice itself.

Kids these days are very lucky because toy manufacturers have come up with some impressive lightsaber replicas, sound and all.

One of my favorite lightsaber’s was Darth Maul’s double red version. How do you make a villain in the fourth sequential Star Wars films more imposing after following in the footsteps of Darth Vader? Giving him a double lightsabre helps.

With Disney writing up a slew of future Star Wars movies, there’s sure to be a lot more lightsaber battles coming our way.

That’s my list for the top 10 coolest looking weapons.

I have to give a couple of shout outs to a couple of other pretty awesome weapons that almost made the list though.

The Penguin’s umbrellas were always pretty cool. If there wasn’t a blade that could be used for sword-fighting at the tip of the umbrella, then the umbrella would shoot bullets or spray sleeping gas.

Other times, his umbrella transformed into a miniature heli-copter, securing a safe getaway for The Penguin. Another important feature is that Penguin’s weapon is deceiving. It catches people off guard because it looks like it’s just an umbrella. Sorry, Penguin. You almost made the list. 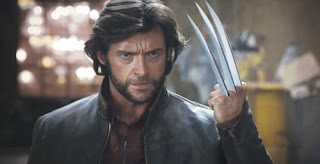 One other weapon, or set of weapons, that almost made the list can be found in Wolverine’s skin.

His retractable claws can cut through almost anything. The only reason Wolverine’s claws didn’t make the list is because they’re essentially part of him. I’m not sure they constitute fit the criteria that the rest of the weapons on the list do.

What do you think? What’s your favorite super hero weapon? Would you take Wolverine’s claws over Green Lantern’s ring? Or maybe something more simplistic, like Xena’s chakram or Captain America’s shield?