I finally jumped on the super heroes on TV bandwagon.  I’ve been watching Marvel’s Agents of S.H.I.E.L.D. for 2 seasons (I still need to catch up on season 3), but I hadn’t been watching any of the other series on the small screen.  There’s Gotham, The Flash, Agent Carter, D.C.’s Legends of Tomorrow, and, now, CBS’ Supergirl.  That's not counting Netflix's Daredevil and Jessica Jones (I watched both of those over the Christmas holiday, so expect blogs on both coming soon as well). 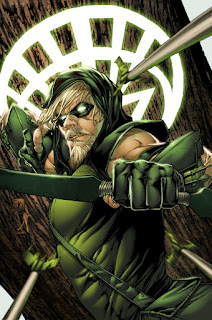 Last Black Friday, I decided to give Arrow a shot.  I could’ve just watched it on Netflix, but, the beauty of Black Friday are those nice DVD sales.  Series like Gotham, The Flash and Arrow were all on sale for $10 each, as opposed to the usual $15 - $40 range.

Finally, I had some time to watch the first season of Arrow.

As much as I like super heroes, I’m not familiar with the Green Arrow character and his backstory, so this was kind of like a fresh, new adventure for me.

I’m not sure how true-to-form the TV show is to the comic books, but a large part of the television show is the boat being destroyed and Oliver Queen (Stephen Amell) being shipwrecked on an island for 5 years.  That was very interesting to me.

The rest of the story seems a little too similar to Batman.  Millionaire (or billionaire?) vigilante who is out to save his city from corruption?  Eh.  Like I said, a little too much like Batman for me.  He even disguises his voice like Batman. 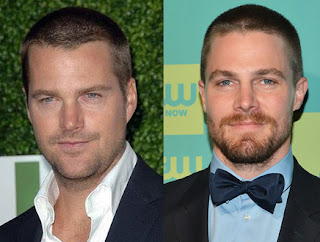 Furthermore, whenever I see Amell, I can’t help but get flashbacks to Batman Forever and Batman & Robin, when Chris O’Donnell played Robin.

Thankfully the rest of the show has differences from Bruce Wayne and Batman.  Ollie (as they call him in the show) has a younger sister, a mother, a stepfather, a best friend (who is dating his ex-girlfriend), the aforementioned ex-girlfriend (whose younger, now dead, sister was sleeping with Oliver), a bodyguard/partner, and a police Sgt. (who is the father of the ex-girlfriend).

There are also a slew of additional characters, foes and allies, who seem like they'll be making reoccurring appearances throughout the series.  Isn't that always how it goes?  Once one masked (or, in this case, hooded) vigilante shows up, all of the crazies crawl out of the woodwork. 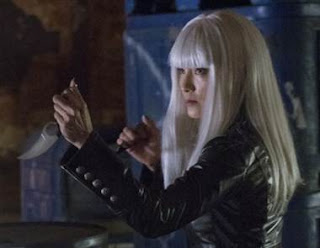 There's an Asian woman who seems like she wants to be Storm, from the X-Men --- leather outfit, white hair and all.

There's the mob boss' daughter, who ends up with a super hero outfit of her own.  There's an evil archer, too.

Then there are the other blue-collar criminals and drug runners who want to make Starling City their own personal playground.

There’s a little too much drama, probably aimed at teenagers, but the show does air on the CW Network, so I suppose there has to be some family and friends drama to get those young adults watching.  I’d prefer a little more of a serious tone, like C.S.I. or something.

In addition to some script pandering to teens, there’s also some bad acting that you’ll need to suffer through in order to watch Arrow.  To be honest, I don’t know that any of them are good actors, but they’re passable.

One other negative: Arrow's costume.  The comic book costume doesn't leave a lot of disguise with the small face mask, but in this TV series, the Green Arrow doesn't even have a mask.  He puts a strip of green paint over his eyes and calls it a day.

His goatee, the color of his skin and his facial structure are all visible to anyone who gets close enough and has good lighting.  Adding to that is the fact that if his hood comes down, people could see his hair and his entire head.

How does he keep his hood on during all those intense fights?  I'm all for suspending disbelief, but unless that hood is superglued to his head, then it should come down at certain points.

In reality, that secret identity of his isn't too secret, especially when he lets so many people into his circle of trust.  A good handful of people knew his secret identity before the season was over.

There are lots of secrets though.  It's just like those annoying shows, like Desperate Housewives and Grey's Anatomy and Scandal, where all the problems could be solved so much easier if certain people would just confide in others and quit keeping so many damned secrets. 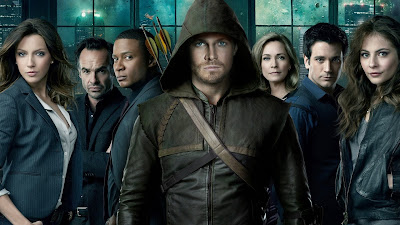 It adds to the drama, when done right, but there's a fine balance.  When there's too many secrets --- when each character is hiding something from others --- then it loses it's realism.  It becomes this show that's just about the next backstab or the next plan-gone-wrong.

It's also hard to root for anyone when each character is lying and hiding things from each other.  There's no real 'hero' when it ends up like that.  I'm hoping Arrow doesn't end up going this route in Seasons 2 and 3. 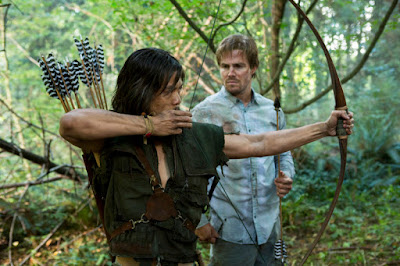 Something I do like about Season 1 is how there are flashbacks to his time on the island.  It kind of reminds me of Lost.  That's probably a good description of this TV show.  It's like Batman Begins meets Lost.

I don't know if the island flashbacks will continue into the next few seasons, but it made the first season very enjoyable.

In some series, flashback scenes can be the parts that you want to fast forward through.

Not in Arrow though.  It's actually one of the best parts of the show because you're wanting to learn more about what happened on this crazy island for 5 years. 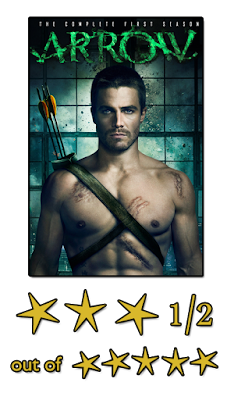 Other than that, it's worth a watch and entertaining enough.