I reviewed season one of Arrow a couple of months ago.  Well, today, it’s Daredevil – the Netflix original series.
I watched the pilot episode about sometime last Thanksgiving, but it took a while for me to finish up the remaining 12 episodes. 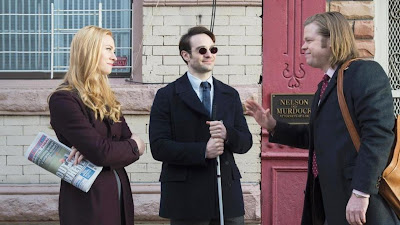 I wasn’t blown away by lead actor Charlie Cox.  As of that pilot episode, I liked Ben Affleck’s portrayal better.

Affleck’s version of Daredevil is considered one of the worst super hero movies there is, but I always kind of liked it.  It wasn’t incredible-amazing-spectacular, but it was good.

Meanwhile, whenever Foggy Nelson was on-screen I couldn’t figure out who he reminded me of.  It was distracting me from the show.  Well, Foggy Nelson (Daredevil’s law firm partner) is played by Eldon Henson.  Thanks to IMDB, I realized he was in The Hunger Games, The Mighty Ducks and She’s All That.
I also couldn’t figure out if I liked Deborah Ann Woll, who plays secretary Karen Page.  Was she one of the good guys or bad guys?  You know how some actors just have that look to them --- where you can automatically tell that they are a hero or villain?  Well, I was unsure about Woll.  She had a certain demeanor to her acting that indicated she could be a villain.  I didn’t like that I couldn’t figure out her spot.
Anyway, I finished up the series a little while back.  If you were bored, or just generally unimpressed with the first episode, keep watching.  It does get better.  Much better!  The first several episodes are generally exposition – all about setting up the characters and their relationships with each other. 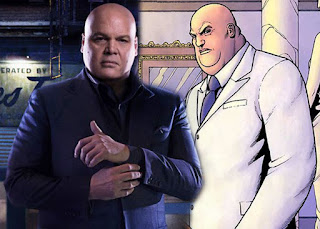 It was the appearance of Kingpin Wilson Fisk that really got the series rolling.  It picks up steam from there and becomes one of those shows where you keep clicking ‘Next Episode,’ even if it’s 2 am and you should probably be getting sleep before work the next morning.
Vincent D’Onofrio portrays Fisk in this series.  You may not know the name, but you probably know the face.  He’s the guy from Law and Order: Criminal Intent.  I don’t know that I would have thought of him if I were casting the role, but he was perfect for it.
He’s not the extremely confident Kingpin character from the animated Spider-Man series from the ‘90’s.  This Kingpin is more of a socially awkward man, due to a rocky childhood relationship with his father.

He also has a love interest in the series, so it’s that’s an interesting dynamic that comes into play as well.  It's not one that is usually shown in most of the adaptations of Kingpin. 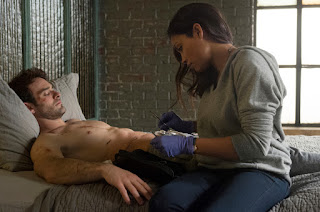 Another really great character is the nurse who is played by Rosario Dawson.  She may be the most recognizable part of the cast.  She and D'Onofrio were two great casting choices.  Kudos to the executives who green-lit those decisions.

Dawson's character may not really add that much to the show, looking back.  She serves the purpose of being Daredevil's pal --- someone who knows his secret and can stitch him up after some of his more brutal fights.

It's Dawson who really made the character more exciting than it was probably intended to be. 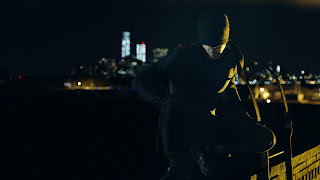 The thing I liked about Daredevil is that it’s a bit darker than some of the other super hero movies or TV shows.  It reminds me a lot of Batman Begins --- an origin story about a vigilante who is trying to save his city (in this case, Hell’s Kitchen) from corruption and despair.
It probably sounds a lot like what I said in my review of CW’s Arrow, except that it’s much better.  It lives in a more realistic world --- or at least more of an adult one --- than Arrow does.
I think about 70% of the filming of Daredevil took place at night or on a dark set, which makes sense since Daredevil isn’t Superman or the X-Men --- fighting wrongdoers in broad daylight. 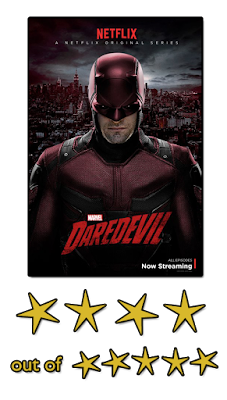 Daredevil is the devil of Hell’s Kitchen and the show does a great job showcasing that.
The CW Network may be investing in super hero shows, but the stories are still primarily ones that appeal to teens.  Daredevil does not.
It’s like the older cousin who has already graduated college, been to the parties, smoked the weed, gotten over the first heartache and has a different vantage point on life.
Netflix did a great job with the series.  They took it slow with the series, from acknowledging the comic book names of the heroes and villains to the exposition of their individual stories and, finally, to the development of their characters.
Even as season one ended, there was much more to do with the characters.  Really, season one is like one, long, 13-episode exposition.

Onto season 2, where the excitement should really pick up.