So if the new He-Man movie is anything like some of the Masters of the Universe comics, we may see some She-Ra characters show up (or at least be set up for future appearances in sequels) in Sony's new MOTU movie.

If there are any She-Ra characters who show up, here's who I'd like to see cast:

It's been a while since Michael Cera was in anything that made pop culture waves, but he's got some decent roles 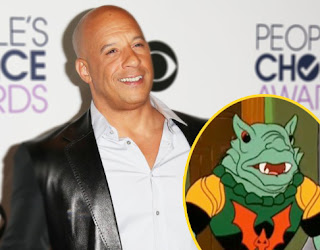 I am Groot.  That's usually what Vin Diesel says on the big screen these days.  In the Masters of the Universe series, he could be Leech.  I'd like to see a more menacing Leech than in the animated series.

Vin Diesel has the physical attributes to make that happen.

Put some make up and molding on his face.  Throw in some special effects and you've got a perfect candidate for this Horde villain. 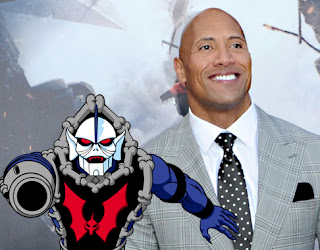 The hardest working man in entertainment. Surely he'd sign up for a role in this movie, especially if it means he'd be be the big bad in a future movie or spin-off She-Ra flick.

The Rock is usually the hero in the movie, but he's got the acting chops to do something a little different.

I think he'd make a pretty good Hordak -- a little more intimidating than the Filmation version, of course.

More in line with what they're doing in some of the comics these days.  Put him in makeup, throw in some special effects and he'll be perfect. 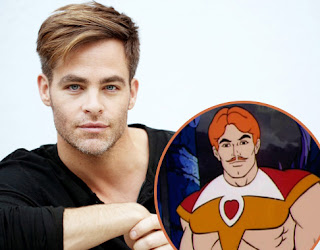 Chris Pine is playing Wonder Woman's love interest in the upcoming WW movie.  He could play the main male character of She-Ra's band of rebels.

Based on his work in Star Trek and Jack Ryan, he could easily handle any action scenes thrown his way.  His acting is good.  He looks like Bo.  Just grow a little facial hair and he's set.

If Bo ends up in the Masters of the Universe movie, I really hope they give him more credibility than in the animated She-Ra series.  They could make him more serious and more adult -- like Arrow or Hawkeye from the Avengers movies.  Chris Pine would be perfect for that role. 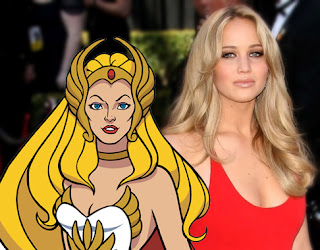 You may remember (though maybe not because it's been so damn long since I did these He-Man blogs), that I also picked Jennifer Lawrence as a possibility to play Evil-lyn. I think that's the role she'd be much better suited for, but she could potentially play the female He-Man.

She's definitely got the star power to bring interest to the role.   She's used to action scenes and big budget movies, so she has experience that would come in handy.

She's not my favorite actress, by any means, but I'd be OK with her getting the role. 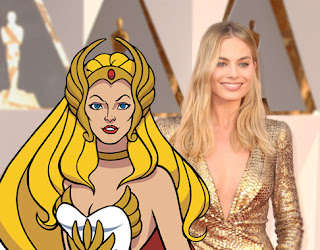 She played the unhinged sex kitten, Harley Quinn, very well, but could she play a straight-laced heroine just as well? I'm not sure. I haven't seen most of her movies or acting work.

However, I'd give her a shot. She's a rising name in Hollywood. She seems to have her head on straight.

Margot isn't my first choice, but I wouldn't complain one bit if she ended up getting the role of She-Ra.  I'd be interested to see what she did with it. 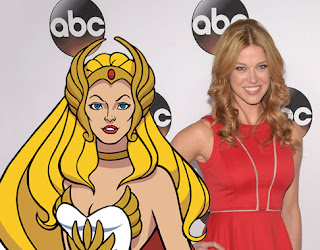 Here's my main choice for the role of She-Ra.  She played Lady Jaye in the second G.I. Joe movie and she went on to be Mockingbird in Marvel's Agents of S.H.I.E.L.D. show.  If any of these actresses on the list have the physical capabilities to play She-Ra, it's Palicki.

She's not exactly an Academy Award winning actress, but she's believable enough in her action roles.  She brought a sense of believability to her role as a S.H.I.E.L.D. agent.

She hasn't had too much mainstream success outside of G.I. Joe 2 and Agents of S.H.I.E.L.D. so I'd hope she'd be up for the role. 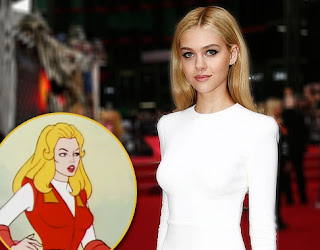 Now here's the tricky part.  Do the He-Man movie makers go the route of Superman/Supergirl and just make a few slight changes between the appearance of Adora and She-Ra?

Or do they go the route of Mike Young Productions in 2002 and have Adora (and Adam) as younger actors in their late teens and then transform into powerful superheroes?

If they do have a younger Adora and an older She-Ra, Nicola Peltz would be a good choice.  She was in The Last Airbender and the 4th Transformers movie.  She doesn't have the most extensive resume, but the roles she has landed are some decent ones.

If anyone could be Adora, Peltz could be.