I’ve been behind a bit in blogging so far in 2018 but I haven’t been behind in my movies.

I have been keeping up with the superhero movies — I’ve just neglected to blog about them. I’d say it’s about time for a Black Panther review, wouldn’t you? 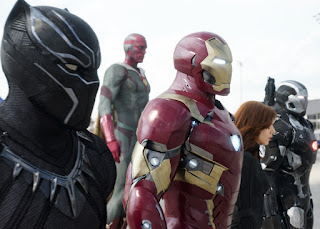 First of all, I thought Captain America: Civil War was a great introduction for the character.

He showed an insane amount of humanity and morals when he not only didn’t take revenge on his father’s murderer but also by preventing the man from committing suicide.

That was one of the most powerful moments of that movie for me, so I was eagerly awaiting the release of the Panther in his first solo movie.


I saw the movie on a Saturday morning (something like 9:30 am from what I remember) and it was a full house. The theater was packed!

I can definitely appreciate the historic aspects of this movie: the first black superhero in a solo film (not as a sidekick), an almost entirely black cast, and a nod to Africa in the way Wakanda was depicted.

It’s hard not to let some of that impact this review. And it may impact the final rating. I’m not sure, honestly. 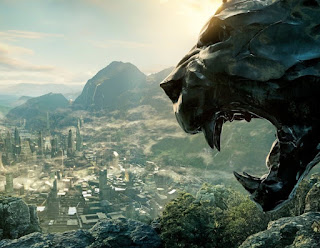 Let’s start with Wakanda though. What a unique place. It was very interesting to see the mix of African tribalism and modern (future, actually) technology mixed together.

It was also interesting to see a major theme of the movie being whether or not to keep Wakanda’s advances secret or to share the info to the world — and potentially make Wakanda a target by doing so.

I think that’s a theme that anyone with even a little bit of property can relate to. It goes back to kindergarten and sharing toys with other kids. Of course the implications in Wakanda sharing tech they could be weaponized is much more complex than children sharing toys.

The backstory with the Black Panther’s father and the Panther’s uncle was interesting. Again, it’s something people can relate to. Family doesn’t always get along and sometimes they commit crimes due to being so misguided in their good intentions. 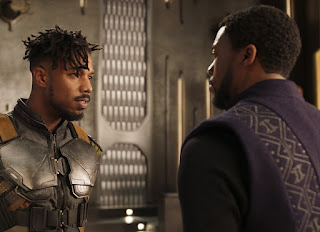 That’s really what the situation boiled down to between The Black Panther (Chadwick Boseman) and Erik Killmonger (Michael B. Jordan) right up to the end of the movie.

But Boseman’s portrayal of the always-do-the-right-thing Black Panther edged him out.


I wasn’t expecting Killmonger to end up having any family tie-ins with the Panther. That was a nice twist. 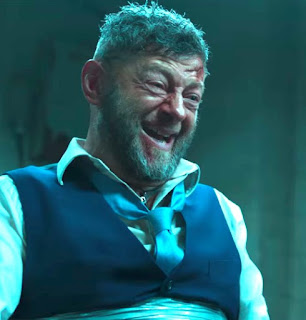 Anyway, you could tell that Marvel had some things planned out because he made another appearance this time around.

Or maybe Marvel just writes their stories and goes back to study them.  Either way, I'm a fan of continuations and finished stories.  I hate when there are storylines left incomplete.  That's just sloppy.

Klaue certainly played a good villain once again, but he was also a one-dimensional villain.

He seemed like a typical bad guy, -- out to take control and destroy whatever has to be destroyed in the process.  A little maniacal, but pretty standard when it comes to superhero villains, so it was neat to see the story shift pretty dramatically near the middle of the movie in the way it did.

Killmonger taking the lead as the main protagonist was a great decision. 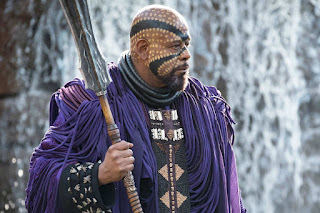 Zuri (Forest Whitaker) really played into the whole family dynamic as well. I wasn’t expecting the character to end the way it did.

He seemed to have a huge level of respect and a calming presence within that kingdom. Whitaker has a lengthy resume in Hollywood, but I haven't actually seen too many of his movies.

I remember Whitaker in Panic Room and Rogue One and thinking he was a decent actor, but he didn't have as big of a part in those movies.

He may have had the same amount of screen time, come to think of it. His role in this story -- in this movie -- felt bigger, though. 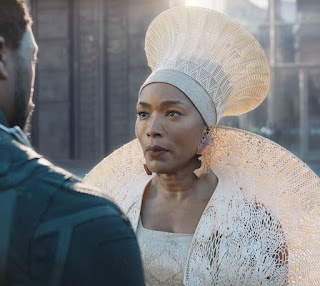 Queen Ramonda (Angela Bassett) was a pretty big get for the movie. The other actors were great but I’m happy any time superhero movies can get a veteran actor like Bassett. It just adds to the credibility of the movie. It’s not just ‘another super hero movie’ but, instead, a good, meaningful movie.

I’ve noticed that older actresses (former Academy Award winners, no less) have been signing onto those roles more often.

Nicole Kidman will portray Aquaman’s mother in Aquaman this December. Sally Field was Ant May in the two Amazing Spider-Man movies. Diane Lane plays Superman’s Mom in the DC Extended Universe, too.

It’s neat to see that happening more often these days. Anyway, back to the movie ... 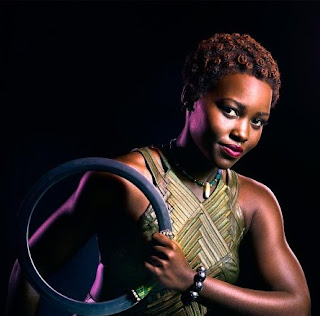 Speaking of giving the movie credibility, how about Lupita Nyong’o? She won an Academy Award for 12 Years a Slave back in 2014 and here she was acting her little heart out in The Black Panther.

I thought the acting was great, as it should be for an Academy Award winner.

She played a very independent-thinking woman: Nakia. She was also his love interest.

But there was conflict in the relationship. She didn’t want to sit on a thrown. She wanted to make a difference.

She was consistently trying to convince to Black Panther to share the resources of Wakanda with the world, particularly the worn out and rundown black communities.

I didn’t entirely agree with some of her stances as she came off as a bit of an idealist who probably would struggle with making some hard decisions when faced with serious conflict and danger.

I think Nakia’s heart is in the right place but she needs a bit of Black Panther’s practicality. I guess that balance is what makes them a good duo. 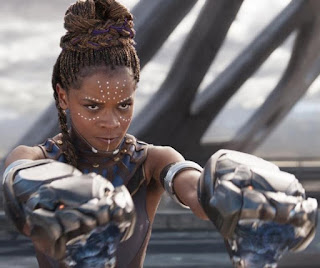 Shuri (Letitia Wright), The Black Panther’s sister, was a heck of a lot of fun! With Nakia being very serious and compassionate, the movie needed a little bit of humor and a lot of it came from the Panther’s book smart, wise-cracking little sister.

Shuri demonstrates advanced knowledge of science and technology while keeping a sense of humor about her.

She wasn’t a hand-to-hand combat fighter but used weapons (futuristic, of course) at her disposal during any action scenes she was involved in.

I assume it was nice for some of the brainiacs out there to see someone like that in a superhero movie. And, again, not just as a side character but as one of the central characters in the movie. 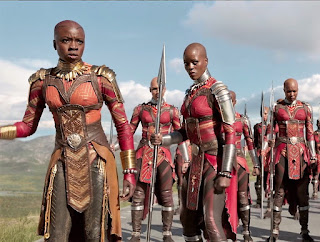 Speaking of strong females, my favorite in this movie had to be Okoye (Danai Garcia). She was a bad-ass, kick-ass lady! Not one you want to mess go with!

As captain of the royal guard, leading a slew of other Amazon-like female warriors, Okoye was loyal to the king at all times and at all costs.

The cost in this movie seemed to be her romance with W’Kabi (Daniel Kaluuya).  I was OK with that because I felt like the romance wasn't really great to begin with.

W'Kabi was the weakest character in the movie in terms of development.  His character and romance with Okoye just wasn’t there. It didn’t seem authentic at all.

He was a stereotypical one-dimensional character.

Thankfully Okoye made up for the lackluster romantic storyline they saddled her with.  Despite being so serious all the time, she added several comedic moments to the movie.

One thing I thought was a little too cheesy was Okoye and the lady warriors all siding with The Black Panther while W’Kabi and his male warriors so easily turned on their former king and friend.

But, yeah, I get that I was a cool visual and was good for females to be equals to men and all that.

Just a little too unrealistic, though. 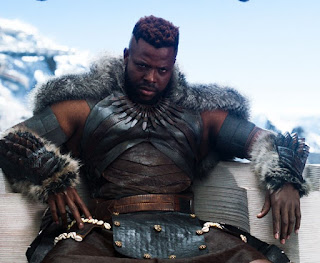 M'Baku (Winston Duke) was definitely someone I didn’t want to mess with. He was a big, dominant individual. He worked well as a foe-turned-ally.

You saw some progression with him in this movie.  He started off as what seemed like a power-hungry individual, but it turns out he was just fighting for dominance.

When he was defeated he did bow out.  He didn't go about things the wrong way, despite obviously being upset by not becoming the King of Wakanda.

He's someone the Panther will want to maintain an alliance with. I could see W'Kabi having a more prominent role in any future films. 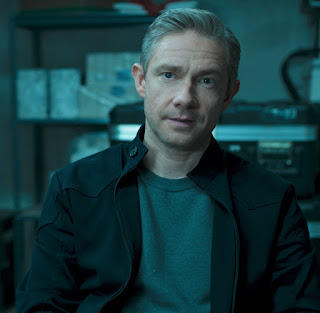 Everett Ross (Martin Freeman) was kind of a pointless character honestly. I mean, they did give him an important role in the plot at the end but it could’ve been fulfilled anyone.

He didn't necessarily have to be the one who fulfilled the role in the plot.  He just ended up being the character who was there to do it.

Ross was kind of the token white guy in this movie, which was maybe appropriate.

That’s not a knock on Freeman but his character. Freeman does a great job in BBC's Sherlock Holmes and was amazing in The Hobbit. He just wasn't needed in The Black Panther, though. 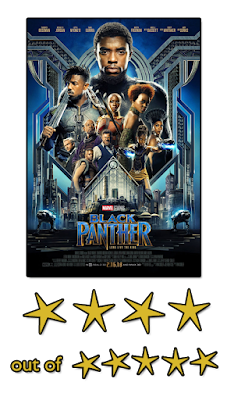 Overall, it was a good movie — beyond the groundbreaking aspects.

I feel like a sequel has to include Killmonger, though.

He’s almost like Loki in the first Thor. Any sequels without him seem like they’d be lacking something.

It will be interesting to see where they go from here, especially given that future movies will be set after whatever else happens in the Marvel Cinematic Universe.