Everything is controversial these days, right?

Even Gillette commercials aren't without controversy.  Then again, what they released wasn't so much a commercial for their products as it was a public service announcement.

It's even called "We Believe: The Best Men Can Be | Gillette (Short Film)"

I watched the entire commercial (you can watch it by clicking HERE) after seeing such an online conversation about it.

I didn't exactly know what to expect.

Overall, I don't have any issue with it.

As someone who grew up in the 90s, I think it would've been a little more positive to have some male role models that didn't fall within the traditional male stereotypes.

Almost every bad guy in a movie smacked a woman at some point or would try to kidnap her for who knows what.

There wasn't much room for just being a normal guy who didn't want to hurt a woman, who was still attracted to women, who cared about his future, who wanted to do well in school and who wanted to have some fun at the same time.

I think it's nice that there is a little more variety out there now.  The guys on Big Bang Theory aren't just nerds.  There are some dimensions to them.

Anything that promotes just a little more variety is OK in my book.

At the same time, there were a couple of moments that I questioned in the commercial:

One moment is where a female is walking on a crowded city block and ends up walking by a couple of guys standing nearby. 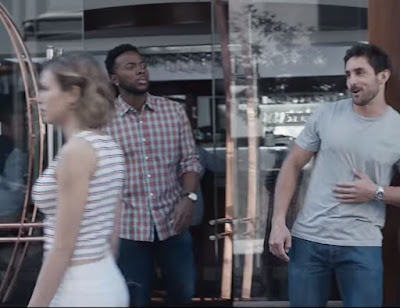 One guy, obviously interested, appears to move to follow her.  His buddy (or seemingly maybe even a random stranger walking out of the building) stops him and says 'Not cool.'

What's not cool?  Being attracted to a female and having the guts to approach her (not always the easiest thing to do)?

If he's a creepy stalker dude who won't take 'No' or 'Get lost!' for an answer, then that's not cool.

But simply being a man who is attracted to a woman isn't a 'Not cool' situation, so that was a little odd.

I assume they were trying to indicate that it's 'not cool' to objectify women, but it didn't come across that way.  Poor execution on that part of the ad.

2. The line of grills

I'm not sure what the point was in having all those men lined up by grills. Grilling is a male stereotype I guess.  So, in a way the ad reinforced that.  But why pair that image with a line of men excusing bad behavior by saying 'boys will be boys.'

That didn't seem to really have a purpose.

3. No roughhousing allowed ... even outdoors where you won't break anything

The last part that didn't seem to correlate with the message of "The Best Men Can Be" is when the father stops his two kids from wrestling in the grass. 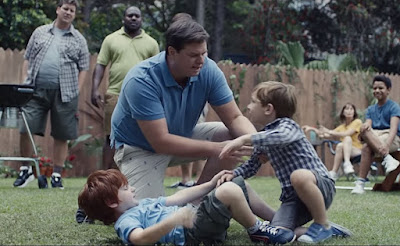 This wasn't an all-out fight.  It was just two kids having fun --- the same way dogs do in all the videos people post to YouTube.  Why exactly did they need to be broken up?

It's important to have a conversation --- to make sure your child knows the difference between roughhousing and actual fighting (and bullying).

But since when did roughhousing become a bad thing?

I don't know if they legitimately are trying to say boys (and girls, for that matter) can't roughhouse or if that was supposed to be an actual physical fight with ill will involved.  Either way, it didn't work.


I think what people probably disliked about the video is that someone is, once again, telling you how to think and how to act.

It kind of goes along with a previous blog post I made about all of those web articles that overuse the phrase '10 things you NEED to know about (insert topic here).'

Someone told me in one of my journalism classes in college that people don't like to be told how to think. You can't present information to them in a lecturing kind of way.

I agree with that.

Instead of lecturing to people on how to be a better man, maybe just highlight and celebrate positive male role models that are out there?


So while the ad had some good intent and overall I had no issue with it, I can see why others did.  It comes across in a very 'lecturing' kind of way.

While it urged people to be a good father (who can argue with that?) and not film women who don't want to be filmed at pool parties (who does that anyway?), it also seemingly inadvertently indicates that roughhousing is not OK and that it's not acceptable to be attracted to and approach a woman.

Gillette's intentions may have been in the right place, but they missed the mark as many times as they nailed it in this ad.

It got people talking, I guess.  So there's that.