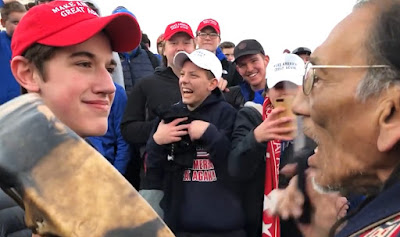 If you are going to wear something to purposefully provoke the emotions of others, then the consequences will likely come full force.

I don't think that applies to the MAGA teens here though (I'd feel the same way if it were the same situation involving a Native American, a group of black teens and the Westboro Baptist Church instead of  the Hebrew Israelites).

If those teens had worn the apparel directly into the Women's March, that'd be different.  That's looking for confrontation.

But wearing it at the steps of the Lincoln Memorial in Washington, D.C. or out in everyday public?  That's a right they have and it's a right that shouldn't be taken away, no matter how many Democrat or Republican voters don't want to see Donald Trump in the White House.

I'd argue that anybody, no matter what they are wearing or what bumper sticker they have on their car or what it says on the sign they are marching with, needs to be respectful of others who don't agree with your opinion.

That means you don't get to enforce your opinion on anyone else.

"You can disagree without being disagreeable."  -   Ruth Bader Ginsburg


When you start diminishing someone else's opinion and projecting your own onto others, we reach the point in society where it's OK to restrict what someone wears or says.

That's the very kind of censorship that liberals and conservatives should unite against because it may suit your argument this time, but what about next time?

It's a slippery slope.

The words we use:

First of all, I'm a supporter of free speech.  That means the Westboro Baptist Church has a right to say what they say.  It's all hateful garbage in my opinion, but as long as they aren't making actual threats to anyone, they have the right to speak their mind.

Phillips expressed the same sentiment in an interview on Democracy Now.

Hate speech is just one of the downfalls of the rights that we have in the United States.  It's not ideal, but I'd rather live with that downfall here in the U.S. than live in China or North Korea (where you get fed literal propaganda on television) or Russia (where you could end up dead because you said the wrong thing about the wrong person or government official).

"To suppress free speech is a double wrong.  It violates the rights of the hearer as well as those of the speaker."  -   Frederick Douglass

"I do not agree with what you have to say, but I'll defend to the death your right to say it."  -   Voltaire


Quite the combination of quotes there, huh?

They're all correct.  The speech that you disagree with is important.

A perfect example is Alyssa Milano's tweet that the MAGA hat is the new KKK hood.

I think comparing the MAGA hat to the KKK is irresponsible, ignorant and dangerous ... but she has a right to tweet it.  She even wrote an op-ed about it.

They're just a couple of examples, but they do exist, so to make a blanket statement like Milano did is just factually wrong.  It's low-hanging fruit and I think she should be ashamed of herself.

It's that kind of rhetoric that divides America.

It's ridiculous to say that Donald Trump is a racist and that the MAGA hat is like a swastika (comments I've also seen online).

Forget ridiculous, it's a damn insult to those who suffered in Germany in the 1940s and those who survived World War II.

Our third world issues with Donald Trump and Nancy Pelosi don't begin to compare to those actual situations and anyone who tries to compare the situation in the United States to them isn't stopping to think about what they're saying or they're so blinded by their own hatred that they just don't care.

Either way, it's a sad state of affairs.

Trump may not know politics, his tweets are filled with grammatical mistakes and he may not have policies that you agree with, but he's not even remotely similar those tyrannical leaders.

If he was, none of us would be criticizing any elected officials because we wouldn't be allowed to.

I may not trust Trump (I don't trust any politicians, myself), but I don't believe he's a racist / homophobic / misogynistic / xenophobic etc., etc., etc.

I don't think Joe Biden, Bernie Sanders, Kirsten Gillibrand and other potential 2020 candidates truly believe it either.  They've been throwing those words around a lot lately though.

Why?  That's easy: those words have simply become acceptable vernacular in 2019.  Those insults have become the norm.  They actually elicit applause.

Trump is not a shining example of discourse and certainly punches and counterpunches verbally.

I don't know that I'd put the blame square on Trump's shoulders, but he fueled some of it.

No matter the start, the result is that liberals overusing the words white privilege, racist, Nazi, sexist, etc. to describe every single Donald Trump voter and/or Republican minimizes the impact those words have.

Some people truly fit those definitions (and not by a small margin), but the words don't mean as much now because they have been used so flippantly and regularly.  They've lost their true meaning.

Words have consequences too.

I've seen conservatives call liberals snowflakes, libtards, Democraps, soy boys, etc., etc.  While those words don't carry the heaviness that Nazi, racist and sexist do, using them doesn't get us any closer to the middle ground.

After all, isn't that where we all want to end up?  A place where we can all have our own individual beliefs and still respect the viewpoints of others, so long as your opinions don't turn to actions and nobody is being physically harmed?

Live and let live.  It's as simple as that.