They first popped up last Fall at Hardee's for a limited time, but I guess that was a successful trial run because they're back. 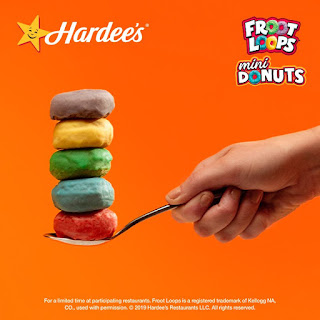 I read that they were only available as a breakfast item, but the Hardee's I called and spoke to said they were available all day long -- at least at their location.

So I had myself a cheeseburger slider and 5 mini Fruit Loop-inspired and flavored donuts!

I have to say, they were all really good.

Maybe it's in my head, but I swear the different colored donuts each had their own, somewhat distinct taste.

For example, I thought the yellow had more of a lemon flavor than the other donuts.  The green colored donut had the traditional Fruit Loops taste, for sure.  It was kind of dry without as much frosting, though.

The frosting on the red donut wasn't amazing.

The frosting on the blue donut was OK, but the donut definitely had the instantly recognizable Fruit Loops flavor to it.

The purple donut was OK, but the flavor wasn't as strong with this one.  I don't know if  that's just happenstance or if the food coloring somehow impacted the taste.

I don't know that I'll rush out to purchase these again, but I love the idea behind it and the fact that they exist.  It's smart marketing.

I'm a fan of when different brands team up for a unique product, whether it's Yoplait and Dunkin' Donuts or Oreo and Swedish Fish.

While these donuts weren't the most amazing things I've ever eaten, I'd order them again if they brought them back again 6 months or a year down the road.