Unlike some Star Wars movies, unlike The Hobbit or Lord of the Rings, Avengers: Endgame is not disappointing in any way. There are maybe two very minor things I could pick at, but that's it. Maybe two minor things in an entire 3 hour movie.

Without giving spoilers, the most important thing I'd say is that nobody will be disappointed in this movie. You can't be disappointed if you liked any of the other Marvel movies ... at all.

Some characters got more screen time than others, so fans of one particular character may not be happy about that, but the movie made sense for every character that so there's just no legitimate complaining about it.

That's probably the most impressive thing about the movie: the writing.

Sure, visuals were great (though I think I was more impressed by Aquaman in that aspect). Sure, the fight scenes (one in particular) was amazing. Yeah, the music was spot on --- taking you on a rollercoaster ride throughout. The music leaves you feeling happy when you're supposed to feel happy, excited when you need to be excited and makes you dab your eyes a bit in certain parts (who knew that a superhero movie would tug at your emotions a bit?).

The best thing about it all was the writing though. Marvel spent over 10 years successfully developing two dozen characters who fans care about, relate to and cheer for.

There are so many small moments in Endgame that show such incredible attention to detail. Each character had a moment or moments to shine, to evolve or to give a nod to the incredible history that Marvel has created in the past 10 years.

At the same time, they definitely set up some characters for the future of Marvel movies. I think I can safely write that without spoiling anything. Nobody expected Marvel movies to end after Endgame, right? The future is in good hands.

It's not just the writing that was detailed either! Sometimes it was just a facial expression, a glance between characters or body language.

Black Widow and Captain America feel comfortable around each other because they've been teammates for the past half a dozen years. Hawkeye and Widow's friendship is continued. Captain America and Iron Man have some closure after the events in Civil War.

There were some moments that visually echoed other scenes in previous Avengers movies. Other times there were verbal references. 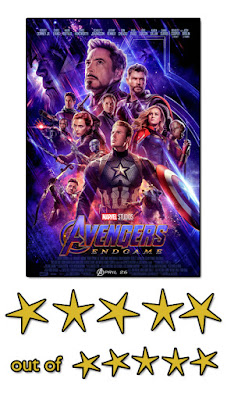 Marvel paid homage to several moments in Guardians of the Galaxy and The Avengers, they recall storylines from Age of Ultron and gave us closure to storylines from Captain America, Thor: The Dark World and Thor: Ragnarok.

Avengers was the first time we'd seen such a big team-up movie. Civil War took it to another level. Infinity War said 'hold my beer' and took it even higher.

Some people have said that Endgame should win an Oscar (or Oscars). While that may be true, I'm not concerned with that. In a way, I'd prefer it doesn't. It seems a bit odd that a movie with a talking raccoon and a big, purple, evil alien would be an Oscar contender.

Why not just let this be the pop culture phenomenon, box office juggernaut and epic superhero movie that it is?

As for a star rating? Five stars, easily.