Making a trip along South Boulevard this week, I noticed a large cupcake sign sitting on the side of the road.

I figured I’d better stop and check it out.

Sure enough, there’s a small dessert shop called Kai’s Kookies and More. There are some small tables with two chairs each inside.

While there are cookies and brownies and bars and other goodies, cupcakes certainly seem to be a staple of the shop. There’s an entire list of flavors. Not all the flavors are available every day though. I immediately noticed a strawberry cupcake that Strawberry Shortcake herself would have probably had in her house. They were supposed to have a Marble Cupcake and an Oreo Cookie Cupcake that day, but they were already out, so I settled for a Red Velvet instead. 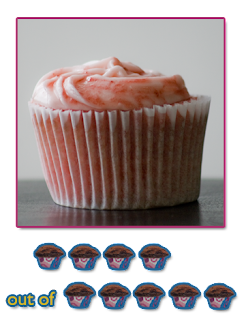 A few weeks ago, I mentioned that the strawberry cupcake I had from Gigi's, while good, wasn’t bursting with flavor. Well this week, I got my wish: a cupcake bursting with strawberry flavor in every bite.

It had so much flavor that when I packed too much cupcake and frosting onto my fork and then ate it, I choked a little bit. It was almost like opening a bottle of Hershey’s Strawberry syrup and doing a shot of it.

They probably did go a wee bit overboard with the strawberry. It was still very delicious though! 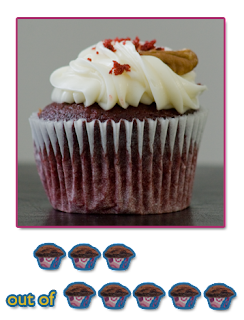 To be frank, the red velvet cupcake didn’t taste amazing. The cream cheese frosting was deliciously creamy. It was light, but not very fluffy. That was probably the best part about the entire cupcake. There was an almond on top, but I removed that. The cake portion was all right, but not remarkable. It really didn’t have that much taste at all.

That’s not necessarily a bad thing, since the frosting was amazing, but if I wanted strictly frosting I would have bought a can of it from the grocery store and dipped some animal crackers in it.

Still, a cupcake without any obtrusive flavors is better than a bad tasting cupcake I guess.


The positives: the Strawberry Cupcake was truly flavorful, if not to the point of extreme. The cream cheese frosting was great as well!

The negatives: the lack of taste in the Red Velvet cupcake was the only drawback.