After spending a few weeks north of Charlotte, I decided to go south this week: to Pineville. 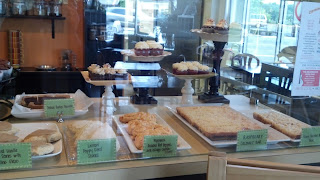 I went to Two On Earth Bakery & Cafe. It's on Main Street in Pineville. There are only one or two parking spots in front of the store, but thankfully there's an entire lot of free parking right across the street by the Pineville Town Hall.

The shop had some seating inside, so if you wanted to cozy it up for the afternoon with a good book in Pineville, this would probably be a good place to go.

Two On Earth is a bakery, not a cupcake shop, so the cupcake selection wasn't massive. One of them had coconut on it, so I immediately passed on that one. That left just a couple of choices. 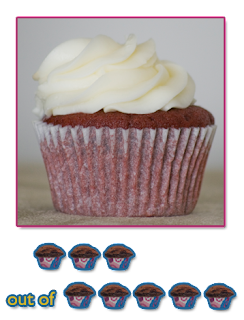 Even in the most basic bakeries, there's usually a Red Velvet option. That was the case at Two On Earth. Since I've been doing these reviews I've found that Red Velvet cupcakes are either very tasty or very bland. Two On Earth's version was pretty good.


The frosting was light and fluffy without being too much like air. The cupcake was good as well. The cupcake wasn't a five-star spectacular, but it didn't disappoint. The flavors worked with each other, instead of competing against each other. That's the other observation I've made about Red Velvet cupcakes. It can be really hard to pair the frosting (typically cream cheese) and the flavor of the cupcake. Two On Earth made it work though. The flavors combined to make a respectable Red Velvet treat. 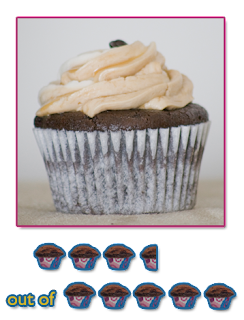 Caramel Macchiato
Even though Two On Earth only had a few cupcakes to choose from, one of them wasn't an entirely standard flavor: Caramel Macchiato. It tasted extremely delicious. If you like cappuccinoor coffee of any kind, you'll probably like the Caramel Macchiato cupcake at Two On Earth. I never drink coffee and I have Cinnamon Roll or cappuccino maybe once a year, but even I liked it.

The chocolate flavor of the cupcake wasn't top notch, but it was good. The cupcake was moist, but still solid. Unlike some other cupcakes, this one didn't crumble into pieces the moment I cut into it with a fork. If the chocolate had tasted better, it would have sent the cupcake over the edge into the five-star range.

The negatives: the taste of both cupcakes were just a little bit lacking. Not bad, by any means, but it wasn't the best cupcake I've ever had.