The minute that Oscar Mayer announced they’d released a bacon-flavored hot dog, I knew I had to get me some. 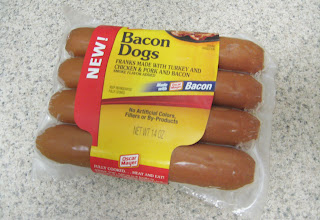 During a Wal-Mart stop last week I found them. I took them home. I made them. I ate them. I was disappointed.

They weren’t bad, but, yeah, I was a little disappointed.

I put what should have been complete awesomeness into the microwave when I got home.

It started popping at about 45 seconds, so I took it out, put some ketchup on a bun and had myself a meal.

One of my friends who had already tried them said he didn’t taste the bacon flavor. After having a few bites, I could see what he meant.

The hot dog didn’t taste like a regular hot dog. There was something a little off about it. I guess maybe it did have the vague taste of overcooked, crispy bacon, but it wasn’t very distinguishable.

It didn't taste the way I was hoping it would have.

I wasn’t ready to give up on these hot dogs just yet though.

I got out the frying pan, threw some I Can’t Believe It’s Not Butter and some garlic oil into the pan, and then fried up a second hot dog.

I put some basil on top too, to add a little flavor to it.

With the addition of butter and basil, the second hot dog did taste different, but still not like you'd expect an Oscar Mayer Bacon Dog to taste like.

If you want a true bacon dog, your best bet is probably wrapping some bacon around regular hot dog.

It was a good idea on Oscar Mayer's part, but it's back to the Ballpark beef franks for me.