When I bought them the cashier told me the cupcakes were a little cold since they were stored in a temperature-controlled glass display case. She said to go ahead and let the cupcakes warm to room temperature – they’d taste better that way. 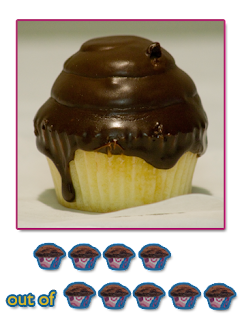 Holy crap! I tried this cupcake first and I’m glad I did. The chocolate frosting tasted amazing! It was frozen on top of the cupcake (almost a chocolate-covered peanut butter ball or a Dilly Bar from Dairy Queen). The frosting was so delicious that I literally licked the wrapper, trying to get any and all frosting that I could get.

The yellow cupcake itself was a little dry, but I didn’t mind it. It’s the kind of cupcake that goes perfectly with a glass of milk.

There was filling inside the cupcake. It was alright, but didn’t add anything to the cupcake in my opinion. With the large amount of delicious, hardened chocolate frosting on top of this cupcake, it really doesn’t matter what’s inside. 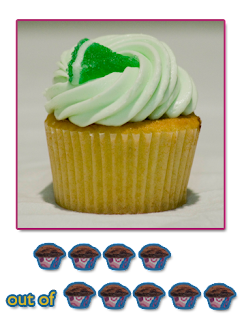 There was a sugary-coated lime-shaped candy on the top of the Key Lime cupcake. The candy was the type of thing the makers of the Sour Patch Kids candy would produce. Maybe it even was one of their candies.

I tried a small bite of the candy, but wasn’t overly impressed, so I left that on the plate.

The cupcake itself was vanilla flavored, but the frosting on top was like a sweet lime. It was like Sprite-infused, mint-colored frosting. Like the Boston Cream cupcake, there was filling inside the Key Lime cupcake too.

The filling inside this one was sour though. Combined, you have the vanilla cupcake, stuffed with a tart filling and topped with a sugary-sweet frosting. That combination worked well, giving the taste buds a variety of flavors to concentrate on, if not confusing them a little. 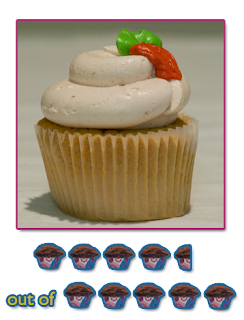 This cupcake was more expensive than the rest, but I can understand why. It was a very impressive sized cupcake. It was like one of those mammoth muffins that you can find in bulk at Sam’s Club.

Just like the Boston Cream cupcake and the Key Lime, the Strawberry cupcake was a little bit dry. Some crumbs were left behind on the plate when I cut into it with a fork. The creamy frosting made up for the fact that the cupcake wasn’t that moist.

Be prepared for a strong strawberry flavor when you taste that frosting too!

It’s a little strong, but that’s a good thing because it’s combined with a very faint hint of strawberry flavoring in the cupcake.

There’s definitely not an outpouring of strawberry flavor in the cupcake by itself, but when you have a dollop of the frosting in the same bite, the result is a very tasty strawberry cupcake.


The positives: they know what they are doing when combining flavors. Nothing was overdone, so you weren’t overwhelmed by multiple flavors. Each element in all three cupcakes worked together.

The negatives: none of the cupcakes were moist, but, that was almost a good thing because the frosting made up for it by being either creamy, flavorful or both.

Cost: the Boston Cream and the Key Lime cupcakes were $2.95, while the larger Strawberry cupcake was $3.50. Almost $4 for a cupcake is kind of expensive, but considering how big it was, it’s not a bad deal.