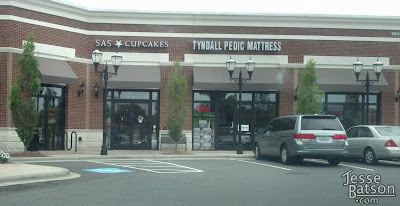 Ever since I started doing these cupcake blogs I've heard about SAS Cupcakes.

There are a few cupcake shops that have gotten lots of word-of-mouth publicity around Charlotte and SAS is one of them.

SAS has two locations in the Charlotte area. The one I went to is located in a small shopping center at the intersection of Ardrey Kell and Rea Roads.

The outside looks is unimpressive. It blends into the surroundings very well. The storefront doesn't stand out as a, "I have to stop in there!' kind of place. 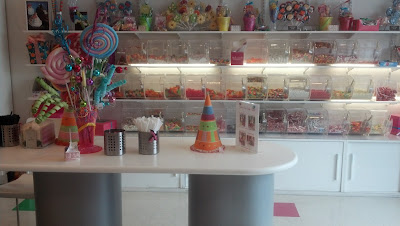 The inside of the store isn't as plain.

It looks like a Party America that's been flipped into a fairy princess castle. There are cases of candy that can be bought by the scoop. Large lollipops, cupcake photo frames, and pointy princess hats decorate the counter and shelves.

It's like a candy store, Party America and cupcake shop all rolled into one.

SAS is probably a place that little girls who enjoy tea parties would enjoy going to, but I think little boys would get bored fairly easy. Most of the party favors in the store were Princess-themed or involved some kind of blue, furry, sparkly hats.

They'd probably enjoy eating SAS cupcakes though. There's a nice variety to choose from. I ended up getting four different cupcakes since the cashier said they keep well in the refrigerator. I figured: 'why not put them to the test?' 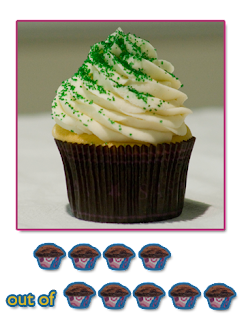 This cupcake looked like something you might find on St. Patrick's Day. It was a vanilla cupcake with white frosting and dark green sprinkles on top.

The cupcake tasted like a sugar cookie that had been spiked. That Bailey’s flavor definitely creeps it's way into domination. At first it kind of hides amongst the other flavors the cupcake offers. Then the Bailey's kicks. The sprinkles on top were the same kind you'd expect to find on a sugar cookie.

It's not the kind of cupcake I could eat day after day. It's definitely a nice treat to have every so often though. The Bailey's flavor makes it unique.

I didn't go through the rest of the cupcakes that same day.

At the recommendation of the SAS cashier, I refrigerated the rest of them. 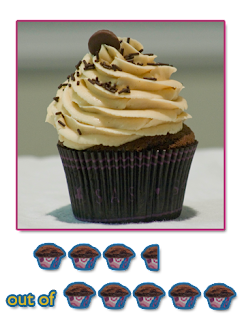 This cupcake was made with good chocolate –- the kind that lasts long after you’ve eaten it. SAS describes it as a, "rich dark chocolate cake, filled with creamy Peanut Butter and topped with Peanut Butter Buttercream."

It's an accurate description, but it leaves off the chocolate sprinkles that are on top of the frosting -- not that the cupcake really needs it.

The cupcake tasted like a cupcake that was trying to imitate a peanut butter flavor. I'm not knocking the cupcake.

Peanut butter is a hard flavor to 100% capture in any kind of baked good -- or ice cream, for that matter. SAS did a nice job with this one. 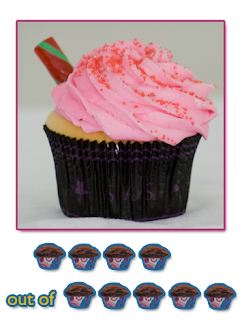 The strawberry cupcake was very tasty! It was decorated like something you'd find at an elaborate birthday party. The strawberry frosting, like the peanut butter and Bailey's frosting, was sweet and flavorful.

I don't know that it would stand out as my all-time favorite strawberry cupcake, but it would probably find a spot in the top five.

The SAS cupcakes were all a little stiff. They weren't stale, even after more than a day in the fridge. They were all solid though.

The cupcakes don't collapse into crumbs as soon as you bite down into it. It keeps it's form after you cut it.

Solid is the best way I can think of to describe them. 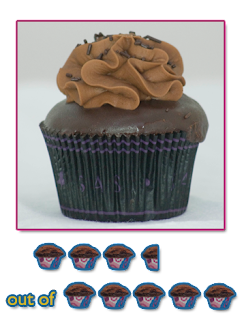 I've found that you can't go wrong with a chocolate-filled center and this cupcake proved that theory true.

Also, just like with last week's Boston Cream Cupcake from Decadent Designs, I've come to realize that having a cupcake dipped in chocolate ganache is a quality I like to have in my chocolate cupcakes.

Like many others, this cupcake reminded me of a delicious chocolate brownie. Unfortunately it didn't stand out as the 'must have' chocolate cupcake in the area. It was tasty, but not spectacular.


The positives: each cupcake had a different flavor to it. I didn't run into the situation of eating the same cupcake with a different color frosting on each one.