This week I went to a new cupcake shop to Charlotte: Wow Factor Cakes.

The business has been around for years, but they've only done weddings and private events. There wasn't a physical bakery location that was open to the public.

It's located on Park Road, right by Toast, another restaurant I've been hearing a lot about, but that's another story for another day.

There wasn't an incredibly large selection of cupcakes to choose from. There's a display case and a cash register near the front of the store, while a large velvet curtain and a few stackable shelves block the rest of the store, where several bakers are busy baking and designing, presumably wedding cakes.

There's enough of a selection of flavors to choose from though. I picked out three cupcakes, but I was tempted by the Cake Pops that Wow Factor offers. They are cake chunks covered in chocolate or white chocolate and placed on top of a stick. Cake suckers! Who would've come up with something like this? The people at the Minnesota State Fair may have. They put everything on a stick there.

Back to the cupcakes though. I bought a strawberry, an cappuccino and a butterscotch cupcake. 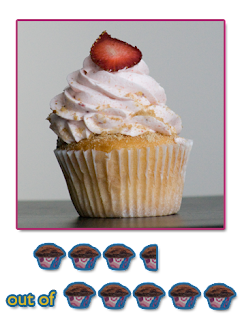 It was moist and fresh, but it was lacking in the strawberry aspect. The frosting had some strawberry flavoring to it, however. There was a chunk of a real strawberry on top as well.

If you get a piece of cupcake, some frosting and a chunk of strawberry, it's a tasty combination. Much like many other cupcake shops, Wow Factor piled the frosting on too high though.

It is impressive looking, seeing so many swirls, but what's left on the plate at the end aren't a few crumbs. There's an entire glob of creamy frosting left too.

Since it's so creamy, the frosting isn't the kind that you can scoop up and eat by itself. It doesn't taste good that way. You may be able to do that with typical store-bought cake frosting, but this stuff is too rich and buttery for that. 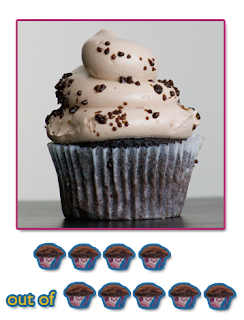 So I just get done telling you, last week, that chocolate cupcakes don't typically do it for me and then I give the Wow Factor Cappuccino a four-cupcake rating.

The odd thing is: I don't drink coffee or cappuccino. This was seriously amazing though.

It's made of ground up coffee grounds and chocolate. A large amount of mocha frosting accompanies the cupcake. Some crunchy bits of chocolate are sprinkled on top too.

I think the chocolate bits were actually my favorite part of the entire cupcake. They tasted amazing!

There weren't enough though. It's like the cookie dough chunks in a Dairy Queen Blizzard -- they are the best part, so you want more, more and more.

I don't know what kind of chocolate they crunched up to sprinkle on the cupcake, but job well done. 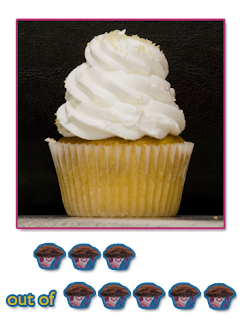 It didn't taste bad, but had I not known that I purchased a butterscotch flavored cupcake, I wouldn't have known that this wasn't anything other than vanilla.

Also like the strawberry cupcake, the butterscotch had entirely too much frosting.

This was my third Wow Factor cupcake, however, so I'd figured out how to eat it.

A large portion of frosting and a small piece of cupcake on your fork and you're set. Overall, this one wasn't very memorable.


The positives: the mocha frosting and the chocolate bits on the cappuccino cupcake are worth a trip back, for sure!

The negatives: the flavoring lacked a little on the strawberry and the butterscotch cupcakes. There was too much creamy frosting too.

Cost: These were a little over $3 a piece. I got the three of them for $9-something.