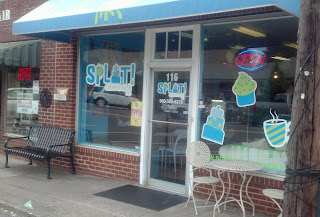 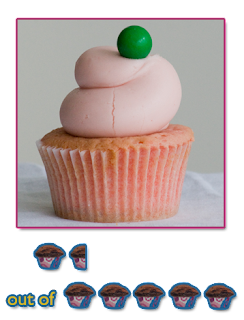 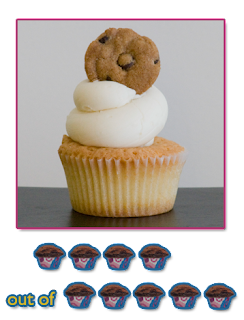 There’s cookie dough baked in at the bottom of this cupcake. It had the taste of an actual chocolate chip cookie. Who can complain about that, right?

The frosting was very sweet, once again, but it tasted much better than the bubble gum.

I’m pretty sure the frosting can give you diabetes. It does taste good though.

It creates a very happy marriage between cookie dough flavoring and cupcake. 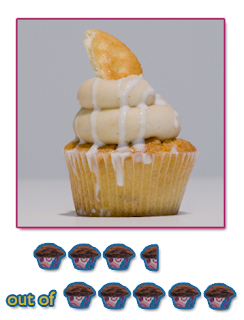 Puttin on the Ritz

This one was very good!

I was intrigued about trying it because it seemed so original. I've heard of fillings and pudding and whipped cream inside of cupcakes, but I hadn't heard of Ritz crackers being baked inside of one.

The actual cupcake was made of white chocolate cake. It was baked with Ritz crackers and topped with peanut butter frosting. Some white chocolate was also drizzled on the top of the frosting. I've found that the extra garnishes are usually welcome additions to the cupcake and frosting. This was no exception.

The peanut butter-tasting frosting was an interesting choice. It’s not one I would have necessarily chosen, but I liked it a lot. 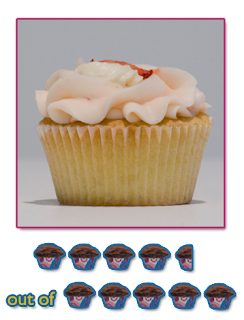 This was amazing! It was super sweet. The vanilla cupcake was filled with pureed strawberries and whipped cream. Strawberry frosting rounded it out perfectly.

There was a real strawberry bit on top, which I wasn’t too thrilled about.

While I like most foods that are strawberry-flavored, I am not a fan of real strawberries. Not sure why, but that’s the case.

The cupcake, the strawberries, the whipped cream and the frosting all mixed together made for an amazing cupcake -- one of the best strawberry cupcakes I've had.

It was a delicious cupcake! Seriously good.


The positives: I really liked the variety of flavors to choose from. Granted, the bubble gum didn't work and my favorite was the strawberry cupcake (not exactly an original flavor), but I'm anxious to go back to Splat because of the dozens of flavors listed on their website.

The negatives: the bubble gum cupcake, by far. Maybe some of you will like it. I definitely didn't.