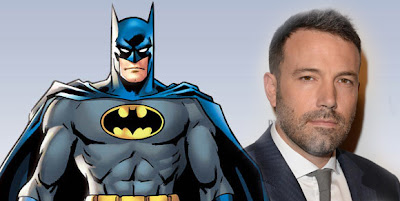 
He already had a successful trilogy though.

If Warner Bros. is serious about a Justice League movie (and most likely a sequel if the first one ever gets off the ground), they'll need someone who can commit to those projects as well.

I'm hoping Warner Bros. was smart enough to have Affleck do that.

It's not as though Affleck is starring in his own Batman movie. Starring as Batman in a Superman movie and hopefully in a couple of Justice League movies sounds good to me.

The success of The Amazing Spider-Man proved that a franchise can be brought back to life with a new actor, even if the franchise isn't that old.

I think that will be the case here. Bale will forever have his legacy as starring in three of the best Batman movies there have been, but Affleck can be his own Batman in what's hopefully going to be a series of D.C. big screen movies.

In related news, Justin Timberlake would apparently be interested in playing The Riddler. Now if that happens, I'll be one of hopefully several people raising an online ruckus.

He did a decent job in The Trouble with the Curve, but I don't think JT has the acting chops to play the famous Batman villain.


Related Content:
• 7 Super Heroes Who Deserve Their Own Movie
• Man of Steel – reviewed.
• The Wolverine - reviewed.