In addition to Novel Sweets, you can find Cloud 9 Confections at 7th Street Market.

It seems they have more of a permanent set up that Novel Sweets does. While Novel has a stand that is set up each day in the middle aisle, Cloud 9 has a spot along the wall, complete with a display case and kitchen.

I’d stumbled upon their website a while ago, but it seemed they only worked weddings and other large-scale events. 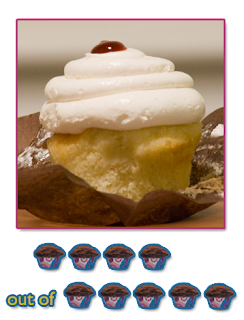 This was the first one I tried. I wasn’t sure how much I’d like it, so I figured I’d get the question mark out of the way. Turns out it was my favorite of the bunch! The thing that stands out about this cupcake, at first bite, is the raspberry filling inside. It’s like the filling you’d find inside a jelly-filled donut.

It was delicious and, best of all, there were no raspberry bits. I like the raspberry flavor, but I hate bits and chunks of fruit, whether it’s in muffins, milkshakes or cupcakes.

It was a tasty cupcake even without the filling. There was a solid vanilla flavor. The frosting was whipped – not amazing, but not bad. The story of this cupcake was the awesome raspberry filling. 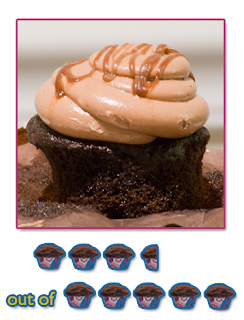 This one was a chocolate cupcake with whipped topping and some caramel lines? On top.

For whatever reason it kind of looks like a hot mess in the photo to the left. It was about the same when it comes to taste.

It was very different. The taste buds are immediately triggered with a very salty flavor. Then comes the chocolate flavor, finished off by a relatively flavorless topping.

There was a filling inside this cupcake as well. I’m not quite sure what it was, but I’m pretty sure the sea salt was contained in that filling. It was a light brown color, similar to the frosting.

The chocolate wasn’t gooey, but the flavor was definitely strong.

I think I liked the cupcake. It wasn’t an all-time favorite, but I’d try it again. It definitely stands out amongst all of the cupcakes I’ve tried, so that says something. 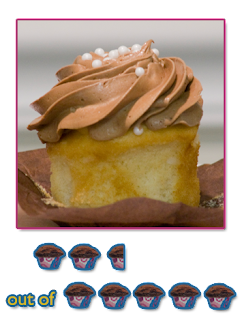 The last cupcake I chose was a vanilla cupcake with chocolate frosting. I’d assumed it would be a safe cupcake to end on.

Turns out it was my least favorite cupcake. It was kind of like cornbread with chocolate frosting.

This one wasn’t as moist as the other two. It tasted kind of like cornbread actually. It wasn’t bad, but there was no real flavor to make it stand out. Same goes for the frosting.

The white candy beads on top didn’t add much to the cupcake, so they weren’t needed, but they do make the cupcake look classy.

The negatives: the vanilla cupcake with chocolate frosting -- not moist and not flavorful

The cost: $2.50 for the regular cupcakes and $2.79 for the cupcakes with filling