You know what that means -- it's time to celebrate accordingly.

Although I don't like chocolate in baked goods, chocolate is my first choice when it comes to milkshakes -- not ice cream, just milkshakes.

There are several different locations you could go to fill up on a nice chocolate shake.

Here a few recommendations to make your choice a little easier:

Jack In The Box

There may be some bias here because they've given me two chocolate shakes for free at different times. I guess that's what happens when you have a friendly server and you make a late-night stop? Anyway, their prices are reasonable and the Jack In The Box chocolate milkshake is worth a try.

It's made with vanilla ice cream, chocolate syrup, and whipped topping. It comes with a maraschino cherry, but I always tell them to hold that (not a fan of cherry's, myself).

Find a Jack In The Box location near you

Growing up, I always preferred Burger King to McDonald's. Burger King had the delicious croissants, the amazing Strawberry milkshakes, and I liked their burgers better. Once I got to college and started paying closer attention to my finances, I realized McDonald's was usually the more economical choice. The quality of their food isn't bad. They definitely know how to do up a chocolate shake too!

Find a McDonald's location near you 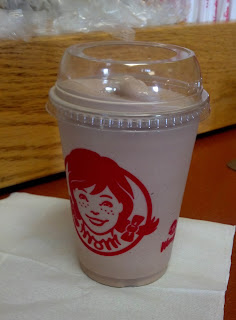 I've tried to figure out what exactly a "Frosty" is, but I've come to the conclusion that it's just a chocolate milkshake.

It's very tasty too. I usually get the $1 version, which is almost a kid-sized cup. It works out well, though. There's a surprisingly large amount of chocolate milkshake that can fit inside a small Frosty cup.


Find a Wendy's location near you

The first time I ate a Red Robin I was amazed that they gave you a chocolate shake along with a little extra in a metal cop.

Now that option is listed on the menu. I'm pretty sure they've been skimping on that recently though.

It's a decent chocolate shake. It doesn't have the chocolate syrup and whipped topping that makes McDonald's and Jack In The Box so good though. It's also expensive compared to the other options.

It does taste good though. Not bad if you're looking for a good chocolate shake.

I had my all-time favorite chocolate milkshake at a Village Inn on a trip to Omaha, Nebraska.

It was a rotten trip, outside of eating at Village Inn and visiting the Omaha Zoo. The website of the motel I stayed at was advertising a Denny's right next door, an outdoor swimming pool and, of course, nice rooms. There was a spider in the bathroom and a half-inch crack between the door and the door frame. The "pool" was about the size of a hot tub on a wooden platform. Come to think of it, maybe it was a hot tub without the heat turned on.

The cable in the motel room didn't work. The clerk at the desk didn't know how to fix it either.

The Denny's had closed down long before my trip because there were weeds growing in the parking lot and the Denny's sign had been removed (although you could still see where the lettering was once in place).

It may have been that set of negatives that made my meal and chocolate milkshake at Village Inn so delicious. Since Village Inn was the closest food option to the hotel, I ate there for breakfast the next morning too. I had another chocolate shake -- and it was just as good as the first.

I'm not sure if the shake was that good or if the vacation was so bad that a chocolate milkshake seemed amazing by comparison.

Find a Village Inn location near you


If those options don't sound good to you, there's always Sonic, Dairy Queen, and Zaxby's