Wow! I’m so glad I saw this movie! Star Trek 2: Into Darkness was, by far, my favorite movie this year so far, but Thor 2: The Dark World could give it a run for it’s money. The Dark Knight is probably my favorite of all time. Hmmm...maybe it has something to do with the word 'dark?'

Anyway, let’s get this out of the way first: stay until the very end of the movie! Even when you think it’s the end…stay a while longer. That’s right. A movie with two extra scenes, mid and post-credits!

Back to the beginning though. 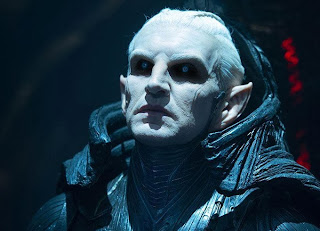 Sometimes it’s hard to set up the background of villains, but this movie wastes no time doing that. They make it clear right away: beware of the evil elves.

Malekith the Accursed, played by Christopher Eccleston (though you wouldn't know it, thanks to the make up and effects), isn't the best villain of all time. I don't know if he'd crack the top 25. He fills the role for this movie and does it well though.

Mostly, I was just intrigued to see an evil elf. Whether it's Lord of the Rings or some Christmas movie, elves are almost always good, little creatures. That's not the case in Thor 2.

This movie is about multiple worlds, so we have to go back to earth to check in with Jane Foster and her crew.

As Jane Foster, Natalie Portman continues to make up for her somewhat lackluster performances as Queen Amidala.

Portman plays Foster very naturally. She brings some class to the role of 'superhero's girlfriend' that other actresses in other superhero movies haven't been able to do.

It’s Kat Dennings, playing Portman’s sidekick Darcy Lewis, however, who almost steals the entire movie. Her sarcasm and witty delivery of her lines fills any lighthearted needs any movie viewer would have.

This time she has her own intern, too. Now that Darcy is one of the seasoned scientists of that team, you can imagine how well it gels.

Just like the previews indicated, Jane ends up in Thor’s realm this time around.

For a while she’s an important part of the plot – not just a romantic interest for Thor.

Speaking of important parts, Thor’s mom gets a lot more screen time in this sequel.

Frigga is strong-willed and compassionate in The Dark World.

Anthony Hopkins continues to deliver as the weathered, yet revered Odin.

Who can forget Tom Hiddleston’s performance as Loki?

His character was so well developed in Thor and The Avengers that he’s not just a welcome addition to any scene he’s in, but one of the best parts about it.

He's one of those characters that you want to see more of because he plays his part so well. As a viewer, you don't hate him. You can almost see where he's coming from. Yet, he's obviously a bad guy. Maybe it's because he's got issues -- and he's not just a demented evil elf -- that he's endearing, even if he is a villain.

There are multiple story arcs going in this movie. One of them is whether or not Thor can trust Loki. 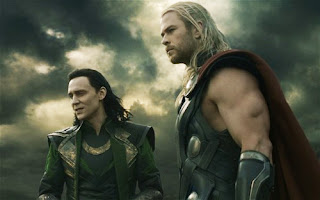 After all, Loki does seem to be evil at heart. He turned on his adopted family and tried to conquer Earth. His actions from Thor and The Avengers are not forgotten in Thor 2.

Lastly, there’s the star of the movie, Thor. Chris Hemsworth is the perfect Thor. He is to Thor as Robert Downey Jr. is to Iron Man or Heath Ledger is to The Joker. There may be somebody who does as good a job --- in a reboot many years from now – but there’s no contemporary who is comparable.

As far as the writing, you can expect the same kind of entertaining mix of drama, comedy, and action.

Marvel has hit its stride in that aspect. It all kind of started with Iron Man. Ever since, they’ve been delivering movie after movie that entertains all age groups.

Thor, unlike most action heroes, uses his strength and a hammer. I could see why it would possibly be harder to create entertaining fight sequences with a hero like that.

Unless you have a villain who is just as powerful, how do you provide the roller-coaster ride of emotions that's expected in a movie like this?

Those in charge of The Dark World worked around that, coming up with a more than one unique way to provide a heck of a thrill ride.

There were some superhero movie clichés, like the universes aligning together – which happens once every so many years.

For some reason, Earth is the planet Thor’s enemies target first, despite a vast many planets out there with other civilizations. They don’t go to Earth because Thor’s girlfriend is from Earth. The evil elves just happen to attack that one. 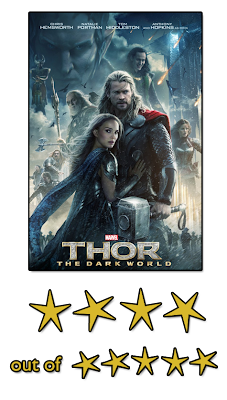 There are some clichés and a few moments that are a little too coincidental, but, overall, it’s a great movie. Don’t overthink it and you won’t ruin it.

However, even the most critical of critics probably won’t find too much to hate about this movie. I didn’t notice any jarring plot points left unattended, any major jump cuts, or any lapses of realism – in Marvel’s universe, that is.

If you’re a fan of the Avengers, Thor, Iron Man or Captain America, you’ll probably like this movie. It’s different enough to be it’s own movie, but still fits in with the line of super hero movies that Marvel has found their niche with.