Your guide to Pumpkin Spice

We're halfway through Pumpkin Spice season here, so I figured I'd review a few of the items I've tried since I'm (slightly) Pumpkin Spice-obsessed. 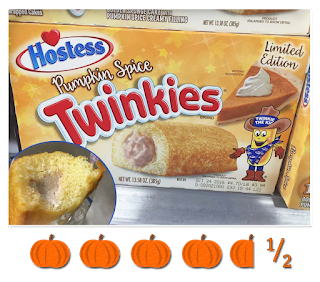 I didn't see this last year, so, whether or not it was actually new, this amazing item was new to me. Ever since they went defunct and then came back a few years ago, Twinkies has been experimenting with different flavors (chocolate covered, banana flavored, etc.). Their experimentation paid off.

Twinkies usually gets the flavoring right and, in this case, it was no exception. It's got the soft outer layer of a Twinkie, but has a very nice (and not overwhelming) pumpkin spice flavored-filling inside.

Sometimes companies that go the pumpkin spice route end up missing the flavor.  The pumpkin spice M&M's, for example?  Way too much spice there.  Final rating on this one: 4 and a half stars out of 5. 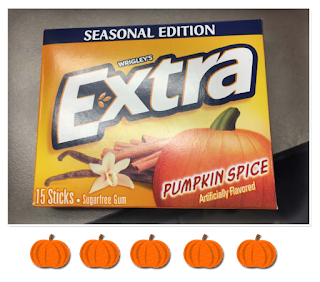 From a new item to an old one.

I'm not sure if Extra is even putting this flavor out this year. I haven't actually seen it anywhere.

Boy, was it good though. It sounds crazy, right? Of all the foods in the world to try to pumpkin spice it up with, who would've thought of gum? Extra did.

I was actually really amazed at how much of a natural flavor it was.

It tasted like pumpkin spice (not too strong), but it was juicy and what you'd expect a stick of gum to be. So, although a little strange, it was a home run. 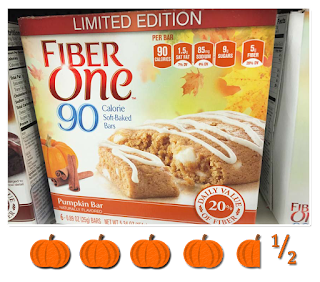 This isn't exactly a pumpkin spice flavor. It's not really pumpkin pie either. I'm a fan of most of the Fiber One bar flavors that are out there. The chocolate bars (even though the cheapskates are making them smaller now!) are amazing. The lemon? Eh. They're OK.

Anyway, the pumpkin bar isn't as good as the caramel cheesecake bar that Fiber One puts out, but it's good. This one doesn't have too much of a spice flavor to it, but it does have some bits of cream cheese inside.

You'd think that'd be a slam dunk, right? But I think it's actually the bits of cream cheese that prevent this pumpkin bar from being as good as it could be. The bar is soft and the bits are hard. I don't know. Something about that just doesn't work for me. 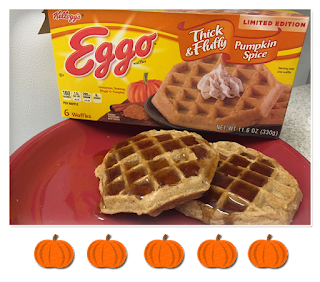 Oh my goodness! Wow! These are limited edition, as are most of the other pumpkin spice Fall offerings, so get them quick!

I tried the Pumpkin Spice Eggos last year, but they weren't of the thick and fluffy variety. The thick and fluffy is always the way to go. A lot of companies just throw the 'pumpkin spice' word out there, but don't do the best job on the actual flavoring.

That's not the case with these waffles. There's the perfect blend of pumpkin, cinnamon, ginger and nutmeg. It's the variety that's included really makes this work so well. 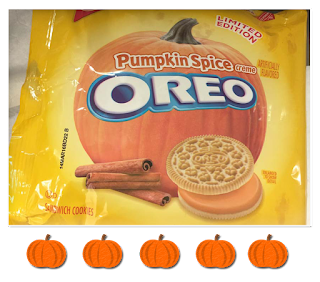 The cookie isn't actually flavored (though Oreo should try that!), but the creme filling (pumpkin spice-flavored) makes this treat amazing.

It's got a powerful little bit of spice in there, but it's not overdone. It doesn't actually seem too artificial even though it's obviously artificially flavored (it's written on the bag).

I mentioned Twinkies putting out the themed flavorings, but Oreo has got to be the King in that category. All of their special flavors and limited edition offers have me buying a new pack every month, it seems.

Not surprisingly, Oreo got it right again. Delicious! 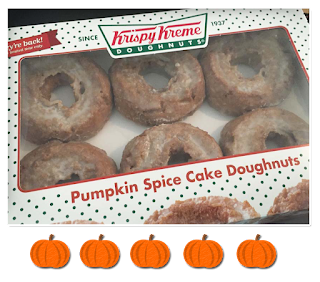 Personally, warming them up is the way to go. I microwave these babies for about 20 seconds (two on a plate), which melts the glaze a bit and warms the doughnut up.

A warm baked good with some delicious glaze. Mmmm!

I've purchased two of these this fall so far. One in September and one in October. It's a good thing Fall doesn't last longer than a few months because I'd have to spend a lot of time in the gym to counteract my Krispy Kreme pumpkin spice addiction.

Final rating: 5 out of 5 (or maybe a 6 out of 5, if it were mathematically possible) 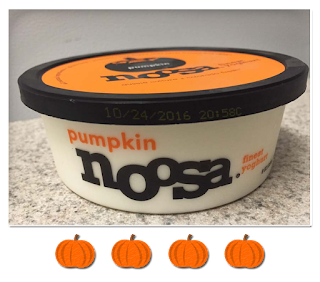 My cousins were torn on this. One of them loved it (said to buy lots of them). The other said it was OK, but that it wasn't worth trying.

I split the difference of their opinions and bought one.

I mixed it up a little (at my cousin's recommendation). At first I wasn't the biggest fan, though. I mixed it a little more and then, with each bite, the yogurt got better. There was a strong pumpkin flavoring, but it wasn't just pumpkin.

The gluten free yogurt (that you should be able to find at Target) is really good because of the mix of flavors. You just have to physically mix the yogurt to get the best blend of it all. 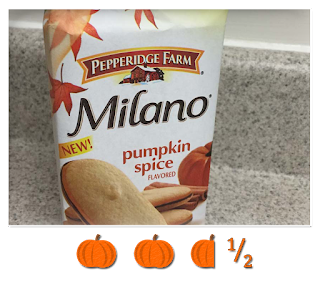 You know earlier I'd mentioned how sometimes these companies don't get the recipe right? How the spices are too strong (like with the M&M's)? That's the situation with the Pepperidge Farm Milano cookies.

The spice flavor is way too strong -- overpowering, in fact -- to make for a good cookie.

It's unfortunate since Milano cookies are usually in high demand. They should've just left it alone, though. These cookies aren't worth experimenting on. 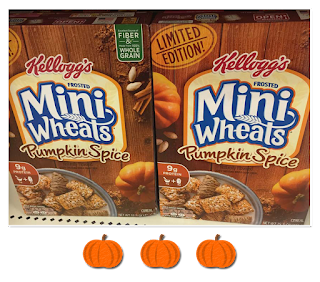 I expected these to be better. I liked the blueberry Mini-Wheats and I love the Maple and Brown Sugar Mini-Wheats. I figured it'd be hard to mess up pumpkin spice Mini-Wheats, but they managed to do it.

Again, the spice is off. That's a reoccurring theme for some of these foods, but it's also a huge factor in whether or not they are successful. It's probably the most important factor as to whether or not a pumpkin spice product is successful.

I couldn't even pinpoint what the problem was, but they need to take a second look at their flavoring recipe because it doesn't work. 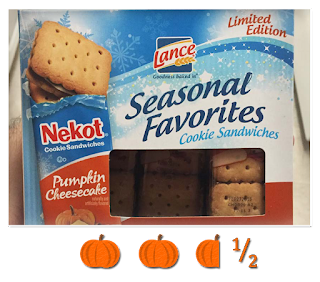 Pumpkin cheesecake? Even better than pumpkin spice! That was my thought process as I bought these at Walmart. I was wrong, though.

I ended up throwing the box away (or taking it to work and leaving it in the break room ... I can't remember which).

I didn't finish eating them -- that's how much I didn't enjoy them.

Final rating: Two and a half out of 5.