I went into Justice League the way I got into all movies that I want to see: without watching the trailers. I tried to avoid as many clips or previews or interviews or spoilers or reviews as possible.

And I wasn't disappointed.

One of my co-workers did mention to me that Joss Whedon apparently retweeted a review by Variety, which said that the villain in this movie was one of the worst villains of all time. I don't know if that's the case because I never actually took the time to find that tweet.

I did see a few months back that Diane Lane, who plays Martha Kent, mentioned on an episode of Watch What Happens Live that she didn't think Justice League would be as good as The Avengers.  She released a statement later, explaining that she was saying that she couldn't reveal spoilers and that she hadn't seen The Avengers.

So, there was that.  Outside of that little bit of information, I didn't know what to expect from the movie, but I was wanting big things.

I was really hoping, after the success of Wonder Woman, that this would be good. Why? Because I'm a fan of comic books and super heroes and I really want the DC Universe to do well on the big screen because that will mean even more DC projects in the future.

So how did this venture compare to some of Marvel's movies? I've got to say: it measured up. For comparison purposes, it reminded me a lot of Avengers 2 in various ways. 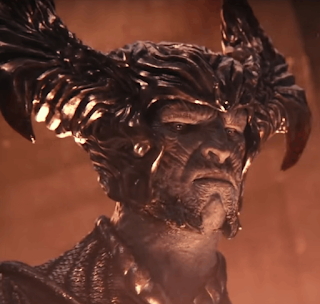 First off, the villain, Steppenwolf, wasn't amazing. If I'm being honest, he was OK. He was acceptable, but not a standout by any means. I think there was a little too much CGI involved with him. Additionally, he didn't really stand out that much.

Just like Ultron in Avengers 2, Steppenwolf filled the need for a powerful enough villain to bring this awesome group of super heroes together against a common enemy.

It's definitely not as though this guy will go down in super hero movie history as one of the best villains of all time, though.

Unfortunately DC comics doesn't have a bunch of really interesting villains. We've got Batman's villains, but none of them pose a threat against an allegiance like the Justice League. Lex Luthor is great, but, again, he's a human. He's not a physical threat against the likes of Wonder Woman, Aquaman or Superman.

As the DC cinematic universe continues on, they may need to consider coming up with some entirely new villains. I wouldn't mind that at all, actually. Or maybe they find some of the more obscure, yet still threatening villains and bring them to the big screen.

Or maybe they just need to work on their delivery. I didn't know anything about Steppenwolf going into this movie, but upon doing some research, I liked certain comic book depictions of him -- much more than the movie's depiction.

He gets the job done, though. 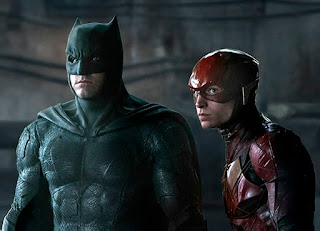 What really makes this movie awesome is the same thing that made Avengers, Avengers 2, and Captain America 3 awesome: the interactions between the heroes.

There are so many great moments in this movie, whether it's comedic one-liners or action sequences. Batman and The Flash were hilarious together. Alfred had some funny moments. Wonder Woman and Batman had a chemistry in Batman v. Superman and carried that on into this movie, too. Aquaman is freakin' hilarious! I'm anxious to see his movie next year.

The Flash should be a really good standalone movie as well.  His interactions with Cyborg made both characters stand out among some big names.

Cyborg was really interesting. I think he's an interesting enough character to warrant a standalone movie down the road.

Wonder Woman was just as amazing as she was in her own movie.  DC Universe has big money with Gal Gadot and if they handle the character the right way, there will be multiple success stories to come -- either in a Wonder Woman standalone film or in Justice League team-ups.

I know I mentioned how awesome Aquaman was a few paragraphs up, but it bears repeating.  He is a sarcastic bad-ass who can control the water.  Pretty much an under water Thor with an edge. 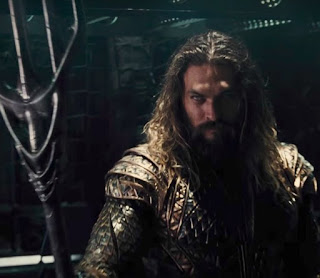 If you've ever watched The Big Bang Theory, you're probably familiar with the jokes at Aquaman's expense.  Maybe deservedly so.  However, this Aquaman is going to shatter the image of the blonde-haired comic book version with the orange and green attire.

It's interesting that DC is following Marvel's own already winning formula.

They started with Superman in Man of Steel.  Then gave us Batman v. Superman (with a Wonder Woman appearance).

After that, they went with a period piece for Wonder Woman (as Marvel did with Captain America's first movie).

Now it's the team-up in Justice League (like Marvel did with The Avengers).  Next, they'll give us Aquaman and The Flash. 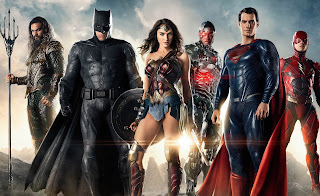 What really impressed me with Justice League was the amount of foreshadowing towards the future Flash, Aquaman and Justice League 2 movies.  They acknowledged their previous movies with small references, told a separate story in this movie and looked to the future all at the same time.

That's an incredible feat for such a big project.  Major kudos to the writers, directors and producers for pulling that off. 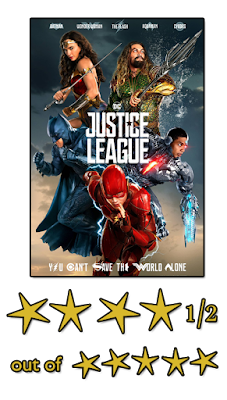 What really excites me is that this is only the 4th movie into their big screen endeavors.  That means (hopefully) they'll only get better from here.

I'd like to give a more detailed review, but I don't want to spoil anything for anyone who hasn't seen it yet.  Maybe when the DVD is released, I'll do a full-on review.

Until then, go see this movie!  If you enjoyed any of the other DC movies so far, you're sure to enjoy this one.  If your allegiance lies with Marvel, you'll still probably enjoy it because DC is getting it right by using lots of the techniques that put Marvel on the map.

I'll end this review on this final bit of advice: if you watch the movie, stay until the end of all of the credits. You won't be disappointed that you did!