Actors who have had multiple super hero roles 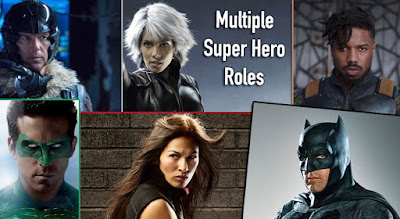 Several stars have had multiple roles in super hero movies or television shows. It’s bound to happen with so many different super hero offerings these days. Whether it’s on Netflix, on cable, in the theaters or on another subscription service, there is a lot of super hero content being churned out by Hollywood right now.

That being said, there's a surprising number of actors who have

I'm not the biggest fan when actors are cast as different roles in the same super hero universe. If it's one role in a DC movie and another role in a Marvel movie, that's different. However, I still like to see fresh faces.

So which actors can Hollywood not seem to get enough of? Which actors keep showing up in the super hero genre?

There's actually quite a few. I'm missing a few of the more minor roles, but here are 14 examples of actors who just couldn't stay away from the super hero genre. 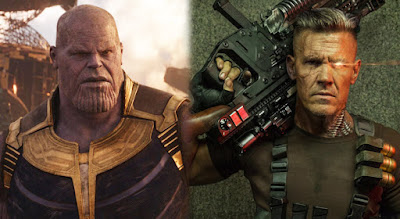 This is his year. After making cameos in various Marvel movies as Thanos, he finally had a big starring role in Avengers: Infinity War (you might have heard of that by now ... it being a very successful movie and all).

However, later this week, he also stars as Cable in the Deadpool sequel. He's making a lot of money off of Marvel characters in 2018. 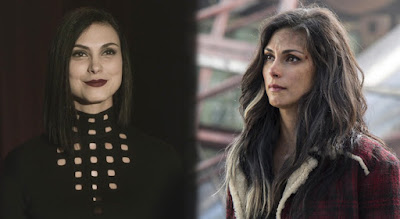 Speaking of Deadpool characters, one of his co-stars (Morena Baccarin) is also no stranger to the genre. She has been and is currently starring as Dr. Lee Tompkins on Fox's Gotham.

In 2016, she was the love interest in the original Deadpool. This week, she makes her return in Deadpool 2 -- playing the same character. This time around they might delve a little bit into her own characters' mutant abilities. 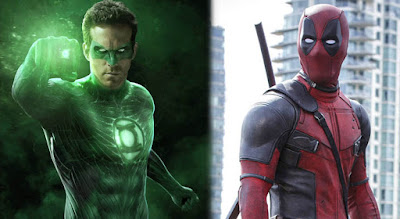 If we're talking Deadpool 2, we can't forget about the man who is actually Deadpool. Despite being the second solo movie, this is actually Reynolds' third time playing the sarcastic character. Remember his time spent playing the character in X-Men Origins: Wolverine? That was an underrated movie in my opinion, but I digress.

After that Wolverine movie didn't set the box office on fire with revenue, Reynolds signed on to play The Green Lantern as part of DC's Cinematic Universe. That movie, of course, also didn't see a lot of success at the box office.

Thankfully, Reynolds hit his stride with the more traditional incarnation of Deadpool -- doing the character justice at least once. I assume the second outing will also be entertaining. 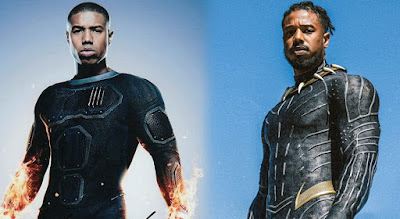 Another movie you just might have heard of this year is The Black Panther. Michael B. Jordan played the multi-faceted Erik Killmonger. The villainous heir to the Black Panther throne drew a little bit of sympathy because he was somewhat a victim of circumstances.

Before he was ruling Wakanda, he played a black Johnny Storm in the disastrous Fantastic Four reboot.

Just like Reynolds, Jordan proved that you can have a bad outing in one super hero movie (in the same Cinematic Universe, no less), only to have a great success story the next time around.

Good thing they keep making those super hero movies, huh? They can turn out to be redemption stories in some actors' careers. 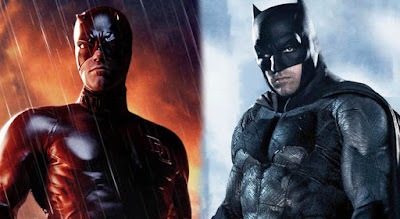 Speaking of redemption stories, let's talk about Ben Affleck. Remember when everyone was freaking out about whether or not Ben Affleck would be a good Batman?

Actually a more accurate description of that timeframe would be: remember when people were freaking out, saying Ben Affleck would be an awful Batman?

Affleck seems to have grown into the role of an aging Batman very nicely.

Of course, he was Marvel before he was D.C. He starred in the not-so-acclaimed big screen version of Daredevil. While it wasn't the best super hero movie of all time, it's not anywhere near as some critics made it out to be. Ben Affleck may want to forget his time in the red suit, but it's forever documented in the $5 bin at most Walmart locations. 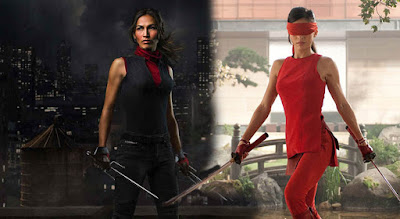 Some people may not realize this, but Daredevil (the Netflix version) isn't the first time Elodie Yung stepped into the role of a super hero character.

This talented actress also starred in G.I. Joe 2: The Rise of Cobra as the character Jinx.

I'm still disappointed that the G.I. Joe franchise didn't take off and have more sequels, so I'm just glad that Elodie ended up being cast as Elektra -- a character she excels in playing. 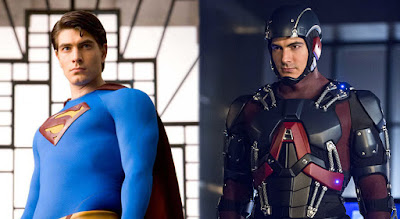 Another super hero movie that gets an unfair amount of flack considering that the final product wasn't actually bad, at all, is Superman Returns. Despite his decent portrayal of the Man of Steel, Routh didn't end up being everyone's favorite Superman. Then again, Christopher Reeve's 4 movies leave some big shoes to fill.

Maybe it was for the best, though. Routh moved on to get a role in DC's Legends of Tomorrow on the CW Network. In that show, he plays Ray Palmer aka The Atom. He's basically Ant-Man, but without the ability to talk to ants. 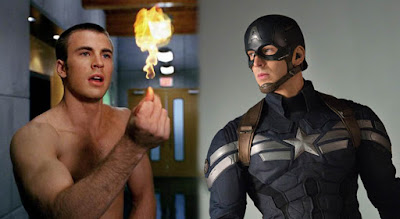 If we're talking about stars playing multiple roles, we can't leave Chris Evans out of the conversation. People give Robert Downy Jr a lot of credit for kicking off the Marvel franchise with Iron Man, but Chris Evans is probably Mr. Marvel more than anyone else is.

Whether it be in a cameo or a starring role, he's been in 11 different Marvel movies so far. And there's still an Avengers that's yet-to-be-released. He's, of course, made his name as Captain America.

But before that he was Johnny Storm in the original Fantastic Four and it's sequel. There's no harder working man in the Marvel universe than Chris Evans. 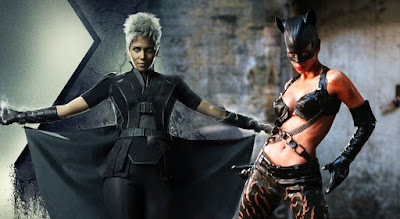 While super hero movies provided some redemption for Michael B. Jordan and Ryan Reynolds after a couple of flops, it doesn't always work out that way. Take Halle Berry, for instance. She landed the role of Storm in 2000's X-Men, probably because she was the most well known black actress at the time.

While her acting wasn't exactly impressive in that movie, she went on to star as Storm in 3 other X-Men movies.

In between her stints as the woman who could control the elements, she starred as one of DC's most notable female characters of all time: Catwoman.

Granted, it wasn't the Selena Kyle character that is synonymous with Catwoman, but it was a version of Catwoman, nonetheless. And it was awful. Horrible. That's one super hero role that Berry should've turned down.

She did the catsuit justice, though. I will say that! 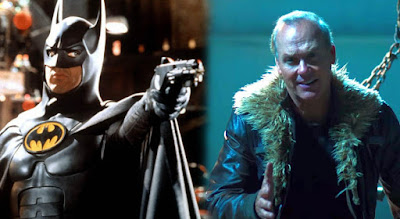 If you ask people who the best Batman is you're likely to get two different answers. Christian Bale is one of them. The other answer? Michael Keaton.

No offense to Adam West and his campy television version, but Michael Keaton made Batman cool in the late 80's and early 90's. While other super hero movies were pretty much nonexistent in the 1990's, Batman carried that decade, mostly thanks to Keaton's portrayal in the first two of the 4 movies that came out over that 9-year period.

Thanks to doing such a great job, he'll always be remembered as Batman. But he jumped over to Marvel in 2017 and played a villain in Spider-man: Homecoming. He did a great job, too. I wasn't sure how he'd do as The Vulture, but he made me forget that I was looking at 1989's Batman in a fur coat with mechanical wings. 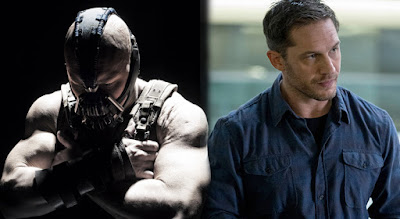 Speaking of Batman characters, there's Tom Hardy. He starred in the blockbuster Dark Knight Rises as the villainous and intimidating Bane. After his great job with that role, I was very excited to hear that he was cast as Venom, which comes out later this year.

Before I heard Tom Hardy signed on, I was skeptical of how good the movie would be. But after hearing that Hardy is going to star as Eddie Brock, I knew they'd have my money this October. 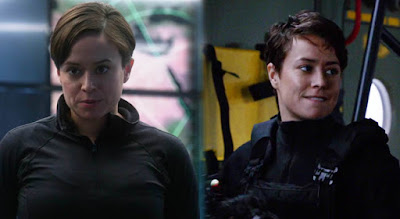 This is one most people probably wouldn't have thought of at all. She's got recurring roles as Agent Vasquez (in Supergirl) and as Agent Piper (in Marvel's Agents of S.H.I.E.L.D.). Her being a bit player in these two television series is probably why she's allowed to star in a DC and a Marvel project at the same time.

I'm not usually a fan of stars being used in multiple roles in the same genre, but I think it's kind of cool that she's able to do that. 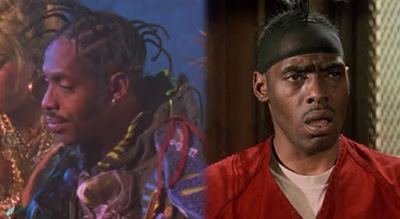 Granted, starring in two of the more underwhelming super hero movies of all time probably isn't something to brag about, but he can officially say he was in a DC movie and a Marvel movie.

If that were me, it'd be on my Twitter bio! 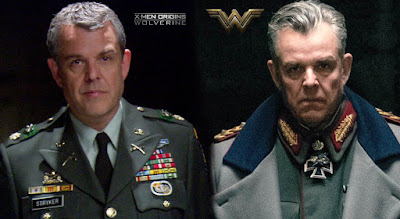 You probably recognize him from 2017's incredibly successful Wonder Woman. That was his most recent work as the villainous Lunderdorff. But he also starred as Stryker in X-Men Origins: Wolverine.

Once again, this is one instance where I don't mind seeing the same actor play parts in two different super hero movies.

Huston makes a good villain and he wasn't in the same universe. One DC movie and one Marvel (or X-Men / Fox) movie. 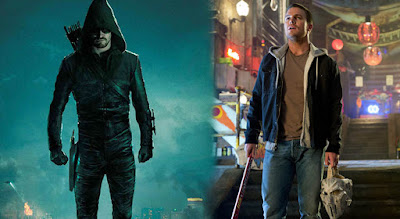 Stephen Amell is most known for playing The Arrow in DC's Arrow. He's not going to win any awards for his acting, but he does a decent enough job as that character for a show that airs on the CW.

He went on to give a lackluster performance as Casey Jones in Teenage Mutant Ninja Turtles 2: Out of the Shadows. While I didn't necessarily mind him being cast in that role, I was hoping he'd at least change his hair style or wear a wig. Instead, it was like watching The Arrow show up in a Turtles movie. 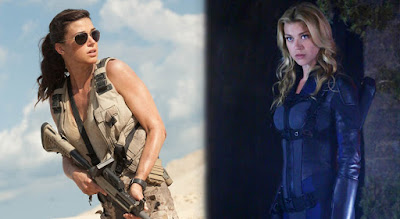 One person who did do a good job in both of her super hero roles was Adrianne Palicki. She first starred as Lady Jaye in the G.I. Joe sequel. She wasn't outstanding, but she got the job done as a fierce female fighter.

It's unfortunate because that was a fun role to see develop.